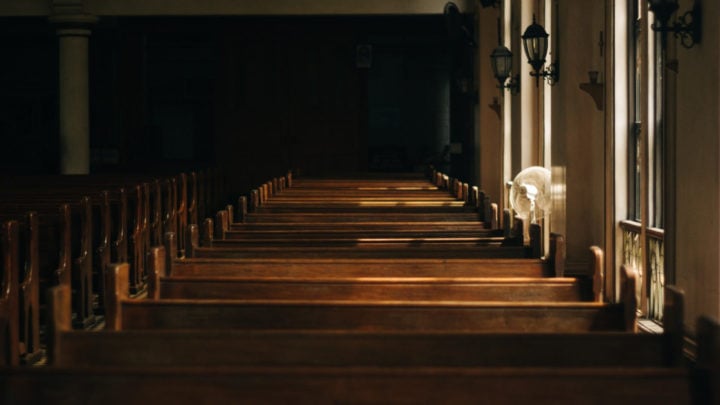 The head abbott discovered him bent over an original ancient text, sobbing and weeping. Source: Pexels.

A young devout Christian named David joined a monastery. He worked hard and was eventually allowed to take his vows.

He promised to be free of the desire for possessions, to be obedient and, most importantly, celibate. He was initiated into the holy order and became one of the brother monks.

He was put to work copying ancient holy manuscripts which he did for a number of years.

After some time, having been religiously obedient and celibate, he was elevated to the post of fact checker. He was entrusted with reading the original manuscripts and making sure they had always been copied letter for letter, word for word.

One day the rest of the monks were having lunch and they noticed David was missing. The head abbot went down to the archives to find brother David, and discovered him bent over an original ancient text, sobbing and weeping.

Alarmed, the abbot asked: “Brother David, what is the matter?”

“David, all this time, what?” the abbot insisted.

“All this time … we’ve been copying it wrong. The word is ‘celebrate’.”

Daily Joke: A mother wakes up her son and says it’s the first day of school

As the summer holiday finishes, a mother wakes up her son and says it’s the first day of school, so get up and get ready.

She says: “Don’t be silly. It can’t be that bad. I bet you can’t even think of two reasons not to go.”

He says: “Really, I mean it! All the kids hate me. And the teachers all think I’m stupid.”

She says: “Well, those aren’t really good reasons. Maybe you can try harder.”

She replies: “Well, first of all, you’re almost years 60 old. And second, you’re the principal.”

Daily Joke: A man came home from work and asked his wife for a beer

A man came home from an exhausting day at work, plopped down on the couch in front of the television, and told his wife: “Get me a beer before it starts!”

The wife sighed and got him a beer. Ten minutes later, he said: “Get me another beer before it starts!”

She looked cross, but fetched another beer and slammed it down next to him. He finished that beer and a few minutes later said: “Quick, get me another beer, it’s going to start any minute!”

The wife was furious. “Is that all you’re going to do tonight? Drink beer and sit in front of that TV! You’re nothing but a lazy, drunken, fat slob…”