Lung disease can happen to anyone: signs you should not ignore 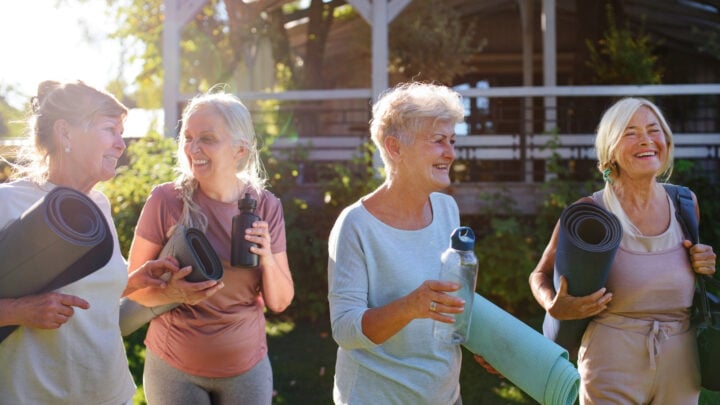 Many Aussies have a serious lung condition but don’t know they have it. Image source: Getty

Breathing isn’t something we usually notice. It’s just something we do. But lung disease can happen to anyone and with winter approaching, it’s time to make your lungs a priority.

Mark Brooke, Lung Foundation Australia CEO, tells Starts at 60, “getting to know how your lungs function and recognising the early warning signs of lung disease and lung cancer leads to better treatment outcomes and it could even save your life.”

“Australians must take their lung health as seriously as they would take their heart health, or any other condition” Brooke says.

One in every three Australians live with lung disease or lung cancer, which is the second-leading cause of death in this country. But research from the Lung Foundation Australia shows that almost half of all Australians rarely or never think about their lung health.

What is lung disease?

Lung disease is any problem in the lungs that prevents the lungs from working properly.

There are more than 30 types of lung disease, ranging from asthma and influenza to occupational lung disease and lung cancer. These lung diseases fall into three main categories:

Who can get lung disease?

Lung disease is often misunderstood. Unfortunately, it is often shrouded in stigma, and many people falsely believe the condition is only caused by a lifetime of smoking.

While age, exposure to toxic fumes or cigarette smoke, and genetics can increase your risk, the truth is that anyone can get lung disease or lung cancer, including men, women, children, smokers, ex-smokers and never smokers.

Many people make the mistake of thinking they won’t have any problems if they’re not in an ‘at risk’ group when the reality is many lung diseases have no known cause.

What are the symptoms and early warning signs?

The early signs of lung disease and lung cancer tend to creep up slowly and are easily overlooked.

In almost every case of lung disease, the most common symptoms are breathlessness and a persistent cough that lasts for more than three weeks. It’s easy to put this down to weight gain, age or lack of fitness, but even in old age where lung function is naturally reduced, feeling breathless and constantly coughing is not normal and shouldn’t be ignored.

The other key signs of lung disease or lung cancer include:

When determining your risk of lung disease, the first port of call should be an online test, such as the simple, free online Lung Health Checklist created by Lung Foundation Australia. All it takes is just two minutes to complete.

The Lung Heath Checklist contains information on the symptoms of lung disease and provides you with feedback on your own lung health risk factors based on your answers.

You can also download your checklist results and take it to your GP to discuss further if you’re concerned you have symptoms that need investigation, or to ask for a lung function test.

Why it’s best to act early

Respiratory Care Nurse, Amanda Curran, explains you shouldn’t be concerned about talking to a doctor about your symptoms ‘too soon’. Breathlessness or a persistent cough should always be checked as soon as you start to notice it.

“It is so important to talk to your doctor and get the right diagnosis and the right treatment. Treatment aims to prevent further damage, reduce the risk of complications and ease some of the symptoms” says Curran.

Figures released by Cancer Australia show that just 18 per cent of lung cancer patients are diagnosed at an early stage, while many other lung conditions develop for years before they’re addressed.

Julie, aged 69 years old, has always been fit and sporty her whole life. She started to feel breathless while playing netball about 10 years ago but had put it down to ageing.

When she eventually went to get a chest x-ray, the doctor asked her “so, how long have you had COPD?”. It was so obvious that the doctor assumed she must have already known for years.

She did lung rehabilitation for 6 weeks and had a ‘marvellous’ result and kept swimming regularly to keep her fitness up.

However during a routine check, her doctor discovered that she had two separate tumours on each lung. The biopsy revealed that it was cancerous and so she underwent radiation and is now in remission.

Julie says how “It’s so easy – especially for people my age – to notice themselves becoming out of breath more easily and put it down to ageing, but just get it checked because you never know what’s happening under the surface.”

Curran advises, “If people are feeling a bit uncertain, Lung Foundation Australia’s Lung Health Checklist is a great way to learn about the signs to watch out for and will help you decide whether you should talk to your GP.”

With flu, COVID-19 and pneumonia infection rates set to sore this winter, it is more important than ever to pay attention to your lung health.

Curran explains that “the most common trigger for a flare up or exacerbation of a lung condition is a cold or flu virus, and as a result flare-ups are more common during the winter months.

“It is important that you can identify the early signs so you can start treatment as soon as possible to prevent further damage, reduce the risk of complications and ease some of the symptoms.”

Breathlessness. A cough lasting more than 3 weeks. Fatigue. These are just some of the signs many of us ignore or put down to aging and lack of fitness. Don’t miss the signs that something isn't right. Taking action could save your life.

Have you or a loved one been diagnosed with lung disease or lung cancer? How did you first know something was wrong?