Don’t have the standard risk factors? You could still die from heart disease 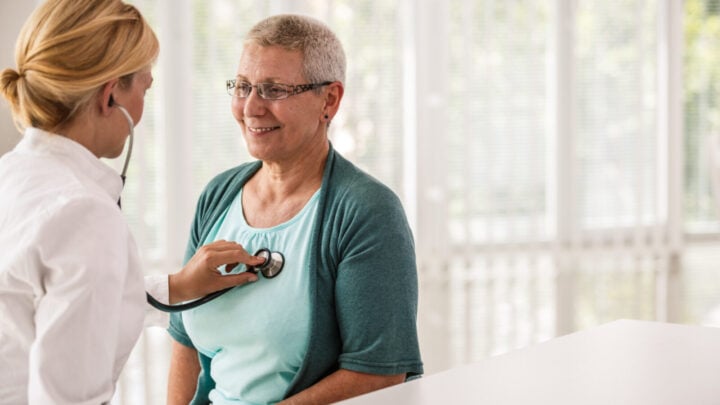 Women over 60 without risk factors for heart disease shouldn't rest on their laurels. Source: Getty

When a person develops heart disease, leading to a heart attack, most people associate this with causes such as high cholesterol, high blood pressure, diabetes, cigarette smoking and a poor lifestyle. It may, however, surprise you to learn that while all major cardiovascular diseases are genetic – with your genes loading the gun – it’s your environment that ultimately pulls the trigger.

To date, medical science has mapped at least 60 genes that code for cardiovascular disease, with less than half coding for issues around cholesterol and high blood pressure. So if, in your case, the majority of these 60 genes place you at high risk for heart disease, poor lifestyle behaviours and stress will bring out the condition probably relatively early in your life – typically over the age of 40 to 50.

Likewise, if you have a separate set of genes that predispose you to cancer, and also have a poor lifestyle or significant stresses, you may activate these genes and possibly develop cancer at some stage during your life.

Sydney-based Professor Gemma Figtree, one of the world’s leading cardiovascular researchers, published a large study in The Lancet journal earlier this month, where she and her team reviewed more than 62,000 patients who presented with a major heart attack, average age 68. She gave the interesting terminology SMuRF to explain the standard modifiable risk factors for heart disease, which include hypertension, diabetes, hypercholesterolaemia and smoking.

The reality is that about 70 per cent of heart disease today is typically related to the most common genetic abnormality globally, i.e. insulin resistance, which predisposes people with this gene to varying degrees of Type 2 diabetes, hypertension, and cholesterol abnormalities where the triglycerides are elevated and the HDL is low. Insulin resistance is also associated with significant abdominal obesity (with a waist circumference greater than 95cm in men and 80cm in women), fatty liver, gout and even an increased risk of cancer.

When Figtree analysed the data, 85 per cent had at least one SMuRF, whereas 15 per cent were SMuRF-less. The fascinating piece of information that emerged from this study was that 30 days after a major heart attack, patients who were SMuRF-less (i.e. had no risk factors) were 50 per cent more likely to die and, interestingly, this was even worse in the SMuRF-less women.

This study did not take into account those with a strong family history, however, and – most importantly – did not analyse the data for what I believe to be a major risk factor: lipoprotein(a). Lipoprotein(a) occurs in 20 per cent of the population, and those who have this purely genetic cholesterol abnormality have a 70 per cent higher risk of heart disease. At the time of presentation, they often have more extensive disease and thus, if they suffer a heart attack, don’t appear to fare as well as those who do not have this abnormality. Thus, a study that purely looks at the obvious risk factors for heart disease – hypertension, diabetes, hypercholesterolaemia and smoking – will not detect at least 20 per cent of the population with an elevated lipoprotein (a), which, in my opinion, clearly explains the findings of this study.

I have been measuring lipoprotein(a) in all of my patients for more than 25 years. The medical profession is just starting to develop an interest in this abnormality because a new drug has been developed that markedly reduces the level in the bloodstream. Studies are being performed to see whether reducing lipoprotein(a) may also reduce the risk for heart disease and the consequences of having a heart attack.

Figtree has to be congratulated for not only bringing this extremely important issue up for discussion by the medical profession, but also for making the public aware that just because a person doesn’t have standard risk factors for heart disease they are not at risk.

It has been my suggestion for many years that every male at 50 and every female at 60 should have a coronary calcium score (not an intravenous CT coronary angiogram), which is the most important risk predictor for heart disease. If you have a strong family history of heart disease, this test should be performed earlier – in discussion with your doctors. A simple test such as a coronary calcium score (using a standard modern CT scanner) and measurements beyond cholesterol – such as lipoprotein (a) – may not only prevent you from having a major heart attack, but also potentially save your life.

Did these findings surprise you? Are you going to get a coronary calcium score test?