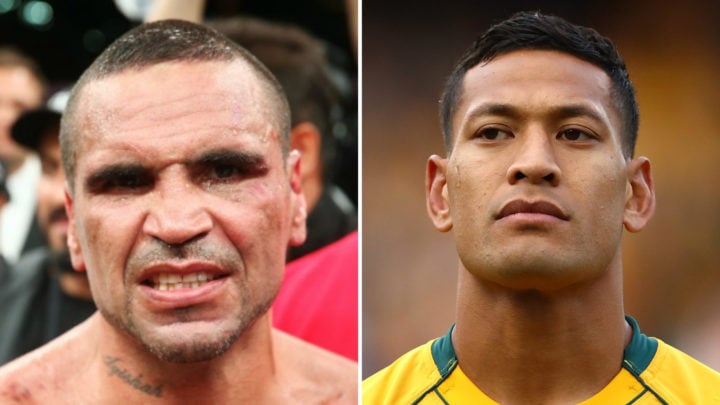 Anthony Mundine is the latest star to attach himself to the Israel Folau controversy, claiming the rugby player is being targeted because he's a black man expressing his views. Source: Getty

As Israel Folau awaits punishment for a series of homophobic comments he shared on social media in April, boxer Anthony Mundine is the latest star to weigh into the controversy – claiming Folau is the victim.

The rugby union star, who is a devout Christian, took to Instagram in April and shared an image which said that sinners including “drunks, homosexuals, adulterers, liars, fornicators, thieves, atheists, idolators” would be going to hell. Rugby Australia found the 30-year-old committed a high-level breach of Rugby Australia’s player’s code of conduct, with his $4 million contract now on the line.

While people across Australia debate whether or not Folau is in the wrong and should be punished for sharing his religious views, Mundine spoke to 7 News on Wednesday and claimed that the football star is being targeted because of his race and claimed that “it’s about racism”.

“People are missing the point here, it’s not about the Bible or the Biblical quote that Izzy put up, it’s a black man expressing it,” Mundine told 7 News. “If it was about the biblical quote then why don’t they push to ban that.”

The former I’m a Celebrity…Get Me Out of Here! contestant said other football stars have committed “actual crimes” but haven’t been as severely punished for their actions.

“I commend Izzy for sticking up and facing such racism and being persecuted and not having the right to make a living,” Mundine added.

He also claimed that it was a “joke” that Rugby Australia was turning its back on Folau and that many players are scared to show their support for the football star.

Mundine’s comments came hours after talkback host Alan Jones launched into a furious rant on air about the state of modern Australian society, mentioning the decision against Folau and a recent egging on PM Scott Morrison.

“The Australian people won’t accept this. This is not the Australia our veterans fought for and we’re going to have to take our country back by argument and by the democratic and peaceful process — not by hate and revenge or vilification and intimidation,” Jones said on his 2GB morning show.

He added he was now “ashamed” of the sport he used to be proud to be involved with.

“Whilst Israel is entitled to his religious beliefs, the way in which he has expressed these beliefs is inconsistent with the values of the sport. We want to make it clear that he does not speak for the game with his recent social media posts,” Rugby Australia Chief Executive Raelene Castle and NSW Rugby Union CEO Andrew Hore said in a joint statement.

“Israel has failed to understand that the expectation of him as a Rugby Australia and NSW Waratahs employee is that he cannot share material on social media that condemns, vilifies or discriminates against people on the basis of their sexuality.”

The statement added rugby is a sport that unites people and no vilification based on race, gender, religion or sexuality is acceptable.

Read more: Israel Folau breaks down in tears as he speaks about standing up for faith

Have you been following this story? Do you think Israel Folau should be banned for making such comments?