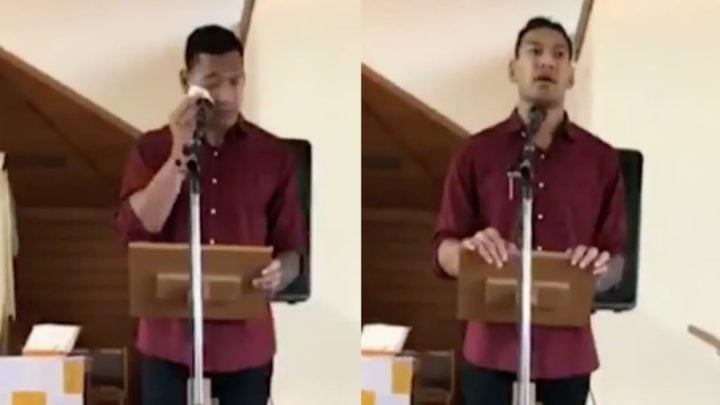 He sparked outrage just weeks ago with a homophobic social media post and he’s now facing being fired by Rugby Australia over the scandal.

But while Israel Folau has kept fairly tight-lipped over the controversy, he’s now shown for the first time the full strain it’s had on him as he broke down in tears while delivering an emotional sermon to churchgoers.

The 30-year-old rugby star was captured in a video, first obtained by The Daily Telegraph, opening up on the importance of standing up for your faith – while citing an example in the Bible of how three men stood up for their beliefs under the threat of death.

“At some stage, each and every one of us will face our own fiery furnace – and some of us may have already faced that,” he’s claimed to have said at the Easter service in Sydney.

Israel Folau has broken down in tears while delivering a sermon about his battle to maintain his faith while facing an onslaught of public criticism. #9Today pic.twitter.com/YfBMn0a5ea

“In your workforce, if they’re telling you something that will compromise your faith, this is a test of faith in which you’re going to be put in a challenge, and the question is ‘What are you going to do?’”

He went on to explain the example from the Bible, adding: “And it says in the word, ‘For what shall it profit a man if he gains the whole world, and lose his own soul?'” to which he became visibly upset, sparking another churchgoer to bring him some tissues.

The emotional footage was released just two days before Folau will take part in a code of conduct hearing, as Rugby Australia seeks to terminate his employment.

The 30-year-old has previously come under fire for his outspoken views on homosexuality, but despite being warned not to air them online, he again sparked anger with his latest post on Instagram.

“Whilst Israel is entitled to his religious beliefs, the way in which he has expressed these beliefs is inconsistent with the values of the sport. We want to make it clear that he does not speak for the game with his recent social media posts,” they said at the time.

The high profile figures went on to say Folau failed to understand their expectations and went against the rugby community’s stance on equality.

“Rugby is a sport that continuously works to unite people. We want everyone to feel safe and welcome in our game and no vilification based on race, gender, religion or sexuality is acceptable and no language that isolates, divides or insults people based on any of those factors can be tolerated,” the statement continued.

Read more: Israel Folau to be sacked by Rugby Australia after homophobic outburst

They concluded: “As a code we have made it clear to Israel formally and repeatedly that any social media posts or commentary that is in any way disrespectful to people because of their sexuality will result in disciplinary action.

“In the absence of compelling mitigating factors, it is our intention to terminate his contract.”

Folau’s team will reportedly argue that he was quoting the Bible in his post.