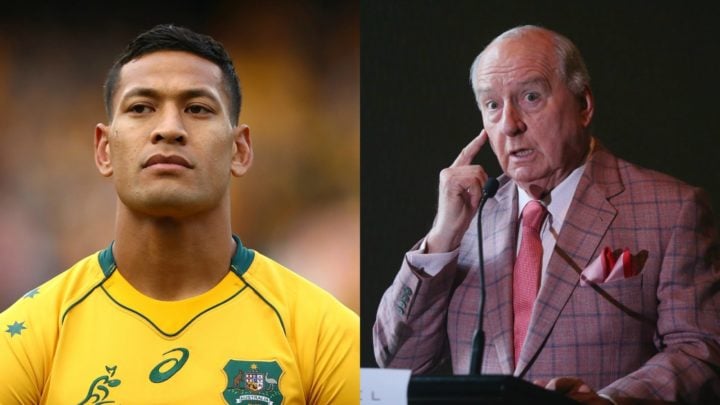 Folau was found guilty of a high level breach of his contract on Tuesday. Source: Getty.

Talkback host Alan Jones launched into a furious rant on air on Wednesday morning about the state of modern Australian society, claiming the country is “not the Australia our Anzacs fought for”.

Former Wallabies coach Jones launched into the on-air furore following the news that Israel Folau had been found guilty of a ‘high-level’ breach of contract on Tuesday, in relation to homophobic comments he shared on social media last month, according to news.com.au.

The 30-year-old rugby union star, who is a devout Christian, took to Instagram in April and shared an image which said that sinners including “drunks, homosexuals, adulterers, liars, fornicators, thieves, atheists, idolators” would be going to hell.

Jones, who has spoken out in Folau’s defence previously, said the decision against Folau, along with recent attacks on politicians after Prime Minister Scott Morrison was egged on Tuesday, is a poor indication of the state of modern day Australia.

“The Australia that our Anzacs fought for seems to be disappearing before our very eyes,” the breakfast show presenter said, according to the publication. “It prompts you to wonder what kind of society we’re living in.

“Nothing wrong with Israel, it’s the society and those who prosecute him who are sick. But the cancer won’t kill us, it’s the cancer that will be removed, not Israel.”

Read more: Israel Folau breaks down in tears as he speaks about standing up for faith

Speaking during his 2GB morning show, Jones added: “The Australian people won’t accept this. This is not the Australia our veterans fought for and we’re going to have to take our country back by argument and by the democratic and peaceful process — not by hate and revenge or vilification and intimidation.”

The former coach went on to tell listeners he was now “ashamed” of the sport he used to be proud to be involved with, adding: “I coached Australian rugby, I was proud of it, I was proud of the boys and I was proud of everything we stood for.

Read more: ‘He has to go’: Israel Folau sparks outrage with another homophobic outburst

Jones also discussed Folau with One Nation politician Mark Latham on air on Wednesday, with the former leader of the Labor party also defending Folau’s comments which saw him facing the sack, describing Tuesday’s ruling as “tragic”.

“All Israel Folau has done is say what people have said for hundreds of years under the banner of the bible, and that is that sinners go to hell. He doesn’t hate the sinners, he loves them, but he’s condemning the sin. That’s the whole nature of Christianity… so it’s unexceptional what Israel Folau has done.

What do you think of Jones’ comments? Do you agree with him or disagree?