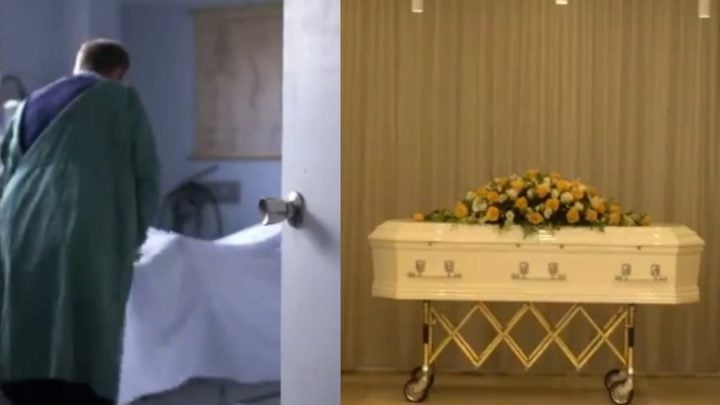 Australia's funeral industry is booming, but is all as it seems? Source: Twitter/4 Corners.

Planning a funeral is one of the hardest and most painful experiences many people will go through, so it’s essential you can trust the company you’re relying on to ensure your loved one’s final wishes are all fulfilled.

However, a new investigation by ABC’s Four Corners – set to air on Monday night – has now exposed a series of shocking secrets some Australian companies have kept hidden. From placing rubbish in coffins to identifying bodies in loading bays, the TV show reveals a series of jaw-dropping incidents it claims happen regularly across the country.

The show aims to show “what really happens when you hand over your loved one”, with one funeral home owner, Michael Cox, saying he’s seen garbage stuffed in coffins and some bodies even packed into the same cool room bays to save room.

“Because either they’ve got no medical waste bin, or purely because they want to get rid of some rubbish, and it’s been put into the coffin with the deceased,” he tells the show. Shockingly he also claims he’s seen one company pull out wire coat hangers from coffins after allegedly throwing the clothes a family has provided for their loved one to wear in the coffin, without dressing them in them.

“Clearly the families have provided clothing, and the clothing has just been thrown into the coffin with the person. Coat hanger and all,” he says on the show.

On Monday, #4Corners takes you behind the scenes of Australia's funeral industry in 'After Death'. @steph_march @abcnews @abctv pic.twitter.com/n8IvU0dG54

Elsewhere, the show also claims a company once asked a doctor to formally identify a body from a shopping centre loading bay. Opening the back doors of the van, Four Corners claims the doctor was seen peering inside, identifying the body, then walking back into the surgery.

New South Wales Funeral Directors Association president Michael Mackay says the issue of having to transport a body to a doctor’s surgery to be identified in NSW is “ludicrous, disrespectful and humiliating”, adding: “I know our staff are horrified every time they have to do it and it’s just morally wrong and it shouldn’t happen.”

He adds: “I really feel sorry for the doctors that are involved in all of this. It’s something that they honestly don’t want to do. They’re doing it because [of] the law.” New South Wales Health has since told the show it will review the current laws.

The show goes on to claim some bodies in Victoria have to be driven interstate because private companies may not own crematoriums nearby – instead having to cross states to get to their own. In fact, crematoriums in the state can reportedly only be operated by state government trusts.

That’s the situation for one of Australia’s largest independent funeral homes, Tobin Brothers, which transports some bodies 200 kilometres from Victoria to New South Wales in order to ensure the best quality of care for the families they’re working with. Tobin Brothers CEO James Macleod explains: “It’s also important to us that we maintain the care of the deceased in our care, because when we hand it over to a third party, we don’t know what their training is.”

CEO of funeral company Zaly, Christian Maxwell, slams the situation on camera and tells the show: “You’re taking someone’s loved one, you’re driving them… in a van where they [are] shaking around and moving around, when there’s perfect facilities here in Victoria… In a way, it should be illegal.”

Maxwell adds: “These people aren’t meat, they can’t just be shipped around because it’s convenient.” More than 150,000 died in Australia last year, with most families having to organise a funeral at some point.

It comes after the New South Wales Government announced major action against the funeral industry in August, amid revelations that grieving families have been “taken advantage of” by exorbitant prices and hidden costs for ceremonies. Instead of being hit with unexpected costs when planning a ceremony for their loved one, new rules will see all funeral companies in the state provide easier access to pricing for Australians in their time of need. A list of costs and services will be documented at their place of business and website, ensuring that all details are made available before a person enters into an agreement.

Have you had a nightmare with a funeral company in Australia?