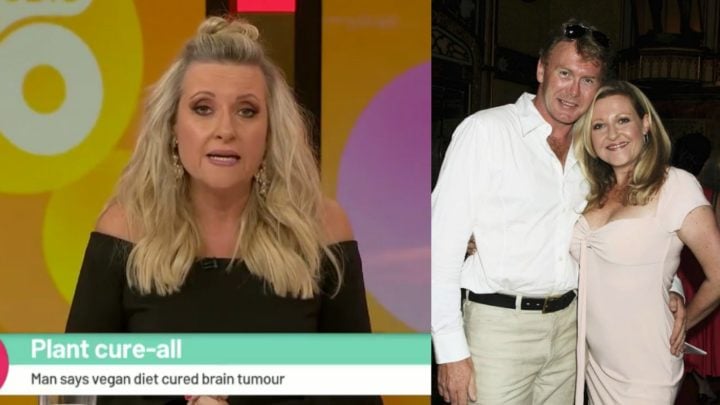 Angela Bishop opened up on her late husband's former treatment on the show. Source: Twitter/Studio 10 (left) and Getty (right).

Angela Bishop has hit out at claims going vegan can help cure cancer in a fiery debate on Studio 10, after an Aussie man claimed changing his diet helped him completely overcome the disease.

According to The Daily Mail, mechanic Dom Tripodi, 30, abandoned chemotherapy and radiotherapy in favour of a plant-based diet after being diagnosed with stage-four brain cancer (glioblastoma) in 2017.

Shockingly, he claimed he then had a scan in February which showed the tumour had completely disappeared.

Weighing in on the claims on Studio 10 on Thursday, Bishop – who lost her husband Peter Baikie in 2017 following a battle with cancer – insisted while diets can help with everyday health during cancer treatments, they can’t cure the disease. In fact, she insisted anyone claiming they can is offering people false hope.

"Any time that crosses the line to false hope, I get really angry." – @AngelaBishop

“I’m an enormous fan of complimentary medicine working in conjunction with traditional medicine when you’re treating cancer, that’s certainly what we did with Peter,” she said. “We followed dietary advice, we followed some Chinese meds and recommendations, everything to ensure that your journey through treatment is the optimum it can be and you’re feeling as healthy as possible – while effectively you’re being poisoned by the treatments.

“But any time that crosses the line to false hope, I get really angry. It is really important that while diet can really help with how you go through your cancer journey, no evidence anywhere in the world has ever proved that it’s a cure.”

She went on to insist that mental health can help with the cancer journey too, revealing that Peter would repeatedly remind her how lucky they were – even when mid-way through cancer treatments.

Bishop’s co-host Joe Hildebrand supported her before launching into a very passionate speech himself on the topic, slamming the claims and insisting if diet really could cure cancer it would have been discovered long ago.

“Stuff like this drives me absolutely insane. Do you not think that if being vegan could miraculously cure cancer we would have found out about it by now?” he said.

“For the love of… it’s just insane. There have been examples of people shoeing traditional therapies and dying and suffering and having all the grief that surrounds that, because of these crackpot theories. It’s just insane.”

It came after Tripodi claimed he was told by doctors he could die within a year if he came off treatments, before discovering his cancer had gone following months on a vegan diet.

Professor Sanchia Aranda, the CEO of Cancer Council Australia, has since insisted to the Mail Online however that there’s no specific evidence showing that following a specific diet will help to treat or cure cancer.

“There is no special diet that can ‘cure cancer’ and there is little evidence that following a strict diet will have any added benefit,” she insisted.