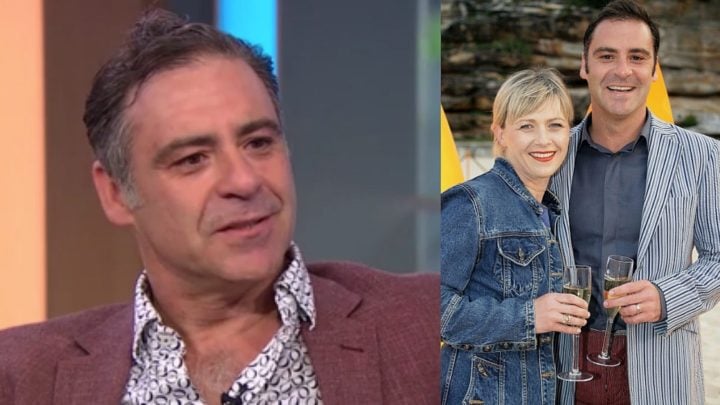 Andrew O'Keefe has admitted he began suffering with his mental health after his marriage split. Source: Seven/Sunrise (left) and Getty (right).

He’s been incredibly open about his struggles with his mental health over the last year and now The Chase host Andrew O’Keefe has revealed the huge impact his split from his wife Eleanor had on him – admitting he ended up feeling like his life was “meaningless”.

The 48-year-old took several weeks off from filming the hit Channel 7 game show in April to attend a mental health clinic, something he’s since revealed helped him come to terms with his demons. And now, returning to his own former show Sunrise, the TV star has admitted his spiral first began after splitting from Eleanor in late 2017.

David ‘Kochie’ Koch began the conversation by admitting he had been worried about O’Keefe for the last year – prompting a very candid discussion from the TV favourite. O’Keefe admitted he could see similarities between his own mental health battle and that of his late musician uncle and Aussie rock ‘n’ roll legend Johnny O’Keefe before his death.

“Everyone hits a part of their life where they really question what it’s all about and who they really are and what they have done for the last four or five years and whether it means anything,” he admitted. “When I split up from my wife Eleanor, that was my time.

“The thing I always believed in most in this life was the power of love and combining with someone to make something special. When I lost that I thought, ‘well, it’s all meaningless’.

“In those times we have several choices about how we deal with things and sometimes we rely on things that aren’t so great for us. Sometimes people turn to work and work their way through their pain or they turn to drugs or eating.”

He ended the speech by sharing an inspiring thought for anyone else struggling themselves, adding: “I just feel very lucky that in this country we have the professionals and expertise to deal with those things if you think it’s getting on top of you.”

O’Keefe insisted while he’s feeling good now, he will channel what he has been through into his new show, based on the life and memories of his Uncle Johnny.

And it comes after O’Keefe first opened up about his stint in a mental health clinic in an exclusive chat with The Herald Sun. At the time the TV star admitted a series of “poor choices” in his life and with his health led him down the path of seeking professional help.

He admitted he wasn’t getting enough sleep at the time, was focusing too much on the painful parts of his life and not on things he enjoyed, and was perhaps drinking too much and not living a healthy lifestyle. O’Keefe said it eventually got to the point where he had to “remove himself from the world” for a bit to seek help.

The TV favourite said he sought “time out in a clinic” to deal with “painful emotions” and “unhelpful behaviours”, adding: “The sense of loss of meaning in your life, which is what I felt, generates behaviours that you yourself don’t even recognise.”

O’Keefe, who shares three children Barnaby, 15, Rory, 12, and Olivia, eight, with his ex-wife Eleanor, separated from her at the end of 2017.

Did you struggle to come to terms with a marriage split?