‘I went in search of killer whales in Bremer Bay, Western Australia’ 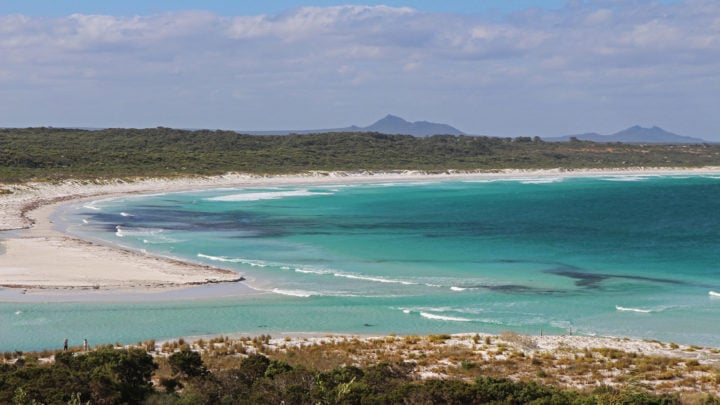 Bremer Bay, Western Australia is a playground for orca and other marine life between January and April. Source: Keith Lightbody

About five years ago there was a crowd funding campaign to help research killer whales offshore from Bremer Bay on the south coast of Western Australia. Each person contributing $500 would get to spend a day at sea on a chartered boat while the crew searched for the elusive Orcinus orca — the largest member of the dolphin family. These black and white ‘speed machines’ can reach 30 knots and hunt a wide variety of ocean prey, but not humans!

I was very nervous about getting sea sick on my day out as the orca were most likely to be found in a mysterious ‘hot spot’ 50 kilometres out to sea in an often rough ocean. I was too scared to eat breakfast, but fortunately my day onboard was marked by moderate seas, warm sunshine and crystal clear waters. I am a keen nature photographer and managed to get a few good images despite the rocking boat!

Historically known as whale killers (‘killer whales’ may have been a language translation error) orca are very social animals and hunt in family pods. I have witnessed a group of orca kill and tear apart a beaked whale. Recently a pod of orca near Bremer Bay even managed to kill a juvenile blue whale. In other parts of the world some orca eat seals and sea lions while other orca eat fish but we have yet to confirm any of these behaviours near Bremer Bay (despite plentiful local salmon and tuna).

In 2015, I was delighted to be invited back by Esperance-based film-maker Dave Riggs to participate in further orca research out of Bremer Bay. Dave had arranged the 2014 campaign and was now teamed up with Mel Joy from Bremer Bay Resort, Rebecca Wellard from Curtin University and Paul Cross from Naturaliste Charters, who provided a whale watching boat. Members of the public could buy tickets to see these amazing black and white ‘sea pandas’. Part of the tour price was used to provide free passage for marine science students and nature photographers to document this unique area. I was approached as it turned out that my 2014 photos had been scientifically useful! After four weeks of daily trips in 2015 I was able to photograph many more orca and also take photos of pilot whales, seabirds, sea lions and even flying fish.

After the 2015 season I was also able to contribute to Rebecca Wellard’s scientific paper ‘Killer Whale (Orcinus orca) Predation on Beaked Whales (Mesoplodon spp.) in the Bremer Sub-Basin, Western Australia’, which was published online.

The 2016 orca season ran from late January through to April and was off to a great start when an 8-tonne male orca breached towards the boat right in front of the WA Tourism Minister and other local dignitaries keen to learn more about this latest tourism hot spot. Paul Cross helped me brace on a heaving deck while I captured some of my most exciting photos yet!

Stopping work in 2017 allowed me to better help my 95-year-old Dad and also continue volunteering as an orca photographer each season. As a hang glider pilot I also love watching the albatrosses as they soar above the waves without flapping their wings. It has been most rewarding working for a few weeks each year with bright young marine biologists and expert crew while doing my bit toward citizen science (earlier in my education career I had been a science teacher). Another bonus is regularly meeting a huge range of Australian and international tourists with wildly diverse backgrounds. However, budding nature photographers beware, the expensive camera equipment can get covered in salt spray, you can easily get seasick looking through a lens on a rocking boat and it is extremely challenging to get great action photos. Why? As one of this year’s volunteers from my local camera club exclaimed, “I will never ever complain about another wedding shoot! The orca appeared almost at random and were often gone in seconds”.

Do you enjoy getting up close and personal with nature? What animal tours have you done while travelling?