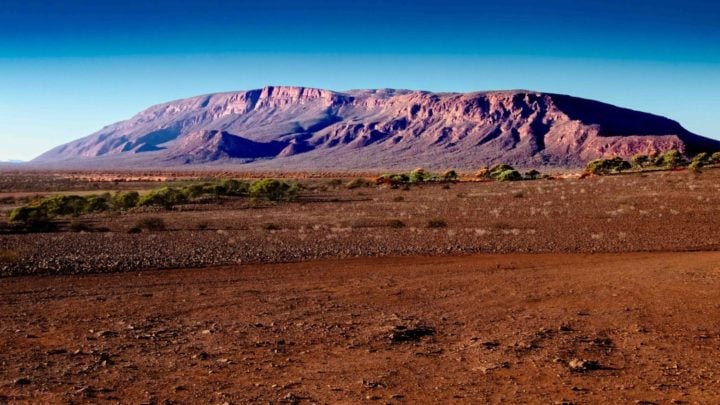 Mount Augustus rises out of sparsely vegetated, arid, sandy plains in outback, remote Western Australia. It had been on my bucket list for years then, recently, a chance conversation with an ex-Navy mate rekindled my interest. He had been there, had a relative currently running the tourist park there and reckoned it was well worth the (somewhat daunting) trip to have a look.

A snap decision saw my van packed, the four-wheel drive fuelled and me on my way. Through my retrospectoscope — I am glad I did it.

It is not the sort of place you drop into on a quiet Sunday afternoon for a beer with the boys. It is remote, even though you can get there via any of seven roads — none of them sealed. The route I chose was to travel from home, in Mandurah, Western Australia, up North-West Coastal Highway to Carnarvon and turn right to Gascoyne Junction where the sealed road ends. There begins some 270 kilometeres of unsealed road north to Mount Augustus. But it was not quite as simple as it seemed.

The maps indicated I should drive 77km then turn left onto Dairy Creek-Cobra Road but I missed that turn — why I have no idea. A further 31km saw me turn left onto an unnamed road (or if it was named, I missed the sign) and proceed past the Burringurrah turnoff, which would have taken me through to Mountt Augustus, but didn’t say so.

Eventually I found myself at a T junction proudly sporting a sign that, much to my surprise, told me exactly where I was. I turned left and none-too-soon found myself at Mount Augustus.

The alert reader by now will have doubtless come to the conclusion either that I am an idiot — which, of course, I would dispute — or that this area is lacking in useful road signs — which is a fact. You may also ask why on earth did I not use the built-in navigation map and satellite system installed in my Land Cruiser. Be assured that the damned thing became quite useless out there. Only on the day I left for home did it bother to tell me I was on the Dairy Creek-Cobra Road (which I knew), but not where exactly and that was the sum total if its use. It had the temerity to return to useful life when I got back onto the bitumen at Gascoyne Junction.

Now, for the roads per se. They are wide enough for giant trucks with multiple trailers carrying livestock to pass. Fortunately I only came across two and chose to get as far off to the left as possible and stop. This because they throw up huge clouds of red dust, which the wind usually carries across the road and they throw up stones — some quite large.

The dust billowed out behind my vehicle and caravan in huge clouds so that it was usually impossible to determine if there was a vehicle behind me. Mind you, no one in their right mind would even consider trying to overtake a vehicle in such circumstance. Neither the driver of the lead vehicle, nor the driver of an approaching vehicle, would know there was a vehicle approaching through the dust. There is a plethora of anecdotal evidence of numerous such tragedies occurring on roads like this.

The road surfaces are solid, but this may well change in wet weather, and the top surface seems to consist of loose gravel. Not pea gravel but crushed rock gravel. These stones trashed the brake wires on my van and gave the gas cylinders a sand-blasted look. Being sharp edged and sometimes pointed they often puncture tyres. I was lucky. Corrugations, strangely enough, were not a real problem and I found it quite easy to wend my way around them if I was sure no vehicles were behind me.

Much of the dust entered the vehicle via air vents etc. It coated everything and, in the caravan collected in large ‘puddles’ on the floor. It got into cupboards and drawers, the stove, under the bed and even into the toilet.

In Mount Augustus I swept, brushed and wiped enough to make it liveable but knew I would have to do it again after returning home. The fridge was the only enclosed space that kept it out.

Strangely, water creates numerous hazard on these roads. In the wet most are closed by local authorities so only rarely do vehicle drive into raging torrents which many a dry creek bed becomes after rain. In the dry the water courses become dips in the road — some minor, some major with steep banks. Some have concrete bases installed most do not. At many of these crossings the road narrows to only one way.

The final hazard is that of animals. Most commonly cattle. I only saw a total of only four kangaroos on this trip but numerous cows, bullocks and calves and a few goats and sheep.

I have two ‘kangaroo whistles’ in the front grill of the Cruiser. Installed to frighten off kangaroos they are very effective. They also cause cows to look up and take notice and back off or even run away. They don’t seem to cause goats or sheep any problems. Their sound is not audible to humans.

The ‘Mount’ itself is spectacular. It is clearly visible from about 30km out and I stopped to grab photos at that point.

I hesitate to quote details of the Mount’s dimensions because many online sites quote differing statistics for height, elevation above sea level, area, and even the geological term for its structure. It is described variously as a monolith (a single rock) which it is not, a monocline (a rock with a step in it or asymmetrical anticline), which it is.

In rough figures it stands about 1100 metres above sea level then rises to a height of 750-850m above the surrounding plain. Its central ridge is 8km long and it covers an area of 4,795 hectares.

It is vegetated over most of its surface except for the steep north-east side. There is no doubt it is bigger and taller than Uluru, which is a monolith and not vegetated. Climbing Mount Augustus is, if not encouraged, then certainly is not prohibited. I will desist from further comparisons.

I arrived at about 2pm on a clear sunny day with a fairly brisk, cool easterly breeze blowing. Car and caravan unrecognisable. Pulled up in front of the store/office. Looked around at a very pleasant, unusual, set-up for caravans and tents. Three or four areas, each about the size of a soccer pitch, covered with really verdant lawn.

Bustling with people pitching tents around the edges, camper trailers drawn up at the edge and expanded out over the lawn. Kids running around.

No wheels on the lawn! Sprinklers running. Cabin and hut-type accommodation arranged around the perimeter.

To the south the brooding, sombre north-east face of the mountain gazed down. With the sun past the yard-arm dark shadows were forming on the face. Overall, a very nice first impression.

Note, dogs are permitted but are forbidden in the adjacent National Park, which encloses the Mount. And diesel cost $2 per litre. The office/shop provides fundamentals and tourist information including flyers detailing each of the many hikes.

I went into the office and introduced myself to Eddie, husband of Raeline who is the niece of my ex-Navy mate in Mandurah and she walked in as we spoke. Very nice people.

After setting up my van on the site they allocated, I leaped into the wheels to reconnoitre for photo shoot spots for next morning. I found the entrance to the loop road running 47km around the mountain, then a sign saying ‘Emu Hill Lookout’ – went there and decided it would be an excellent spot to start in the morning.

I also saw sign saying ‘Cattle Pool 800 meters’. I assumed that would be a mud hole or such like.

Returning to the van, I flushed the dust out with a shower and had dinner. It was an opportunity for me to check my camera and drone equipment. I was somewhat disappointed to learn there is no Telstra service and no internet access and worried my kids would be even more worried with no contact (usually SMS), for the day.

I arrived at Emu Hill Lookout shortly before the first rays of the rising sun kissed the mountain face and got a bit ‘snap happy’. I decided the wind was too strong to put up my drone for aerial photos so drove the Cattle Pool.

What a surprise. No mud hole but a beautiful billabong lined with ancient white gums and plenty of clean water. The cattle must access it at another point for there were no signs of their presence. Spent some time there snapping happily and reading the interesting, historical information signs. Apparently this billabong is one of a string along the course of the Lyons River.

Then the leisurely drive around the loop road. The road itself is the equivalent of any road in the area but with side tracks into the many walking trails — easy to Class 5 ‘challenging’. Most have information plaques detailing site history and details.

The main walk, to the peak, is 12km return, Grade 4 and 5, which includes some, ‘very steep’ sections. I am very attached to my 78-year-old heart and could see no reason to challenge it after such long and faithful service. There is also the Edney’s Track (which leads to a lower peak with extensive views), indigenous rock painting and sites of both European and indigenous historical significance.

That was the better part of a day well spent. I had achieved my goals of seeing Mount Augustus, learning a lot more about it and capturing some worthwhile images. I departed as the sun rose next day and arrived home on the third day. Overall I travelled 3,120km and spent $1,062.09 on fuel.

Through the retrospectoscope again — time and travel well spent.

Been travelling? Travel at 60 wants to publish your story. Simply a href=”mailto: [email protected]” target=”_blank” rel=”noopener noreferrer”sign up as a contributor and submit your stories/a. When your story is published, you’ll go into the draw to win some great weekly prizes. You can also join the Travel at 60 Travel Lovers Club on Facebook to talk to other travellers in the Travel at 60 community.