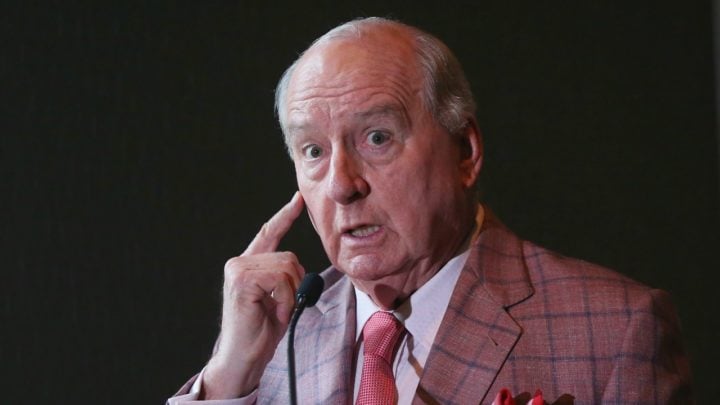 Alan Jones has taken aim at the government, claiming they are ripping off Aussie veterans with a military super scheme. Source: Getty

Alan Jones has slammed the government over its treatment of veterans in relation to a military superannuation scheme, claiming elderly Aussies who served the country are being ripped off and left with little money to get by.

The 2GB host took aim at Minister for Veterans and Defence Personnel Darren Chester for not taking action and ensuring those who put their lives on the line for Australia receive the pension they deserve.

From 1948 to 1991, many military veterans enrolled in the Defence Force Retirement and Death Benefits superannuation scheme (DFRDB) which saw them take out a lump sum of their super as a form of loan to help them financially after service, the ABC reports.

They were made to pay back the loan in fortnightly reductions from their pension with the total to be paid off by the time they reached the age of 72. The pension was then supposed to return to the full amount.

However this has reportedly not been the case, with many veterans still contributing part of their pension – despite the loan already being paid off in full.

Back in April, Chester announced an independent inquiry into the scheme however, according to Federal National Party MP Llew O’Brien, there is more that needs to be done.

His opinions were echoed by Jones who launched into an angry outburst against Chester during Monday morning’s 2GB segment.

“These are people who are considered Australian military heroes,” he explained. “They’ve seen battle, they’ve been sent into battle by us, our government and now the government according to Llew O’Brien, and he’s absolutely correct, is making a profit out of them in their senior years.

“What Llew O’Brien is asking his own government is how much money are some of our military veterans owed. These poor people feel defenceless.”

Speaking during the segment on Monday, O’Brien explained how he has met with many veterans lately and is “disgraced” by the treatment they have received.

“The picture I get is this is a disgrace,” he claimed. “In my view these people were not given proper information when they left the military under this scheme.”

The politician went on to explain how Vietnam veterans in particular have faced an onslaught of mistreatment since their service for the country and now are being “kicked in the guts” again by the government.

“Now they’re getting kicked in the guts by what appears to be the government profiting out of them,” he exclaimed.

“I find it abhorrent. Isn’t it any wonder that our veterans are feeling so let down?”

Chester has spoken out in response to their comments, claiming despite their beliefs, the government is committed to putting veterans and their families first and has already taken action to provide fairer indexation for veterans receiving pension payments.

In a statement to Starts at 60, the minister said an investigation is ongoing into the scheme after many veterans voiced their concerns about the accuracy of it.

“In response, on 25 March 2019, the Government announced an independent inquiry into the administration of the DFRDB scheme commutation arrangements,” he explained.

“Following the Government’s announcement, the Department of Defence consulted with the Ex-Service Organisation Round Table on the scope of the inquiry and who was the best place to lead. The Ex-Service Organisation Round Table supported the Commonwealth Ombudsman being approached to undertake an investigation in relation to the information provided to members with regards to the DFRDB commutation.

“On 20 May 2019, the Commonwealth Ombudsman announced that he had decided to commence an own motion investigation into this matter.”

Do you know anyone who took on the Defence Force Retirement and Death Benefits superannuation scheme? Are they still facing difficulties with it now?