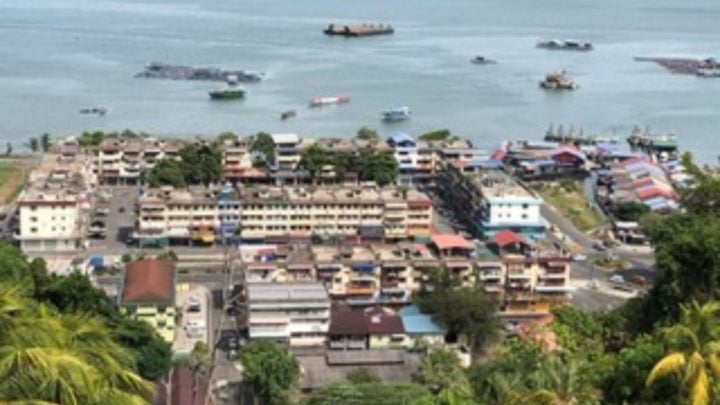 Looking out across Sandakan on the north-east coast of Borneo, Malaysia. Source: Sue Hannant

If you’re a military enthusiast, a bit of a historian or one of those people who like to explore places that ‘turn back in time’, or simply just visiting this beautiful, natural island of Borneo, I’m going to share a secret with you. Sandakan is a city in the Malaysian state of Sabah, on the north-eastern coast of Borneo. It’s a 40-minute flight from Kota Kinabalu, Sabah’s capital. Many know it for its famous Sepilok Orangutan Rehabilitation Centre, but Sandakan is also full of history; not only Malaysian and British history, but also Australian.

It was a last minute decision to fly to Sandakan. We had been planning a trip to the Orangutan Rehabilitation Centre, but nothing was set in concrete until we heard about the Anzac Day Service. If you’re wondering what ANZAC means, let me explain. ANZAC stands for Australia and New Zealand Army Corps. Anzac Day is a national day of remembrance in Australia and New Zealand that broadly commemorates all Australians and New Zealanders “who served and died in all wars, conflicts, and peacekeeping operations”. The most significant of this national day of remembrance is the first landing of the Anzacs at Gallipoli and is observed on April 25 each year.

With Anzac Day fast approaching we booked our airfares and arranged accommodation. Return airfares set us back $140 for two people from Kota Kinabalu (or KK as it is commonly known) to Sandakan and return. As we were leaving KK the view from the air was stunning, looking down the crystal clear water was oozing a bluish green colour, there were small islands scattered around the ocean and it was just like looking at a postcard. I was regretting never having learned to dive. It was a beautiful day and it was a ‘Wow!’ view.

No sooner were we seated on the plane then it was time to get off. We then made our way into town, about a 20-minute drive from the airport in a ‘Grab’ costing around $4. We had booked a few nights at the Four Points by Sheraton, Sandakan, which sits on the waterfront, is very central to the local markets and has the one and only mall located downstairs. The choice of hotels in Sandakan is somewhat limited although there are several backpacker hostels around. The hotel cost around $75 per night with breakfast.

Maybe you’re like me and not a great early riser, but with the Anzac Day Dawn Service due to commence at 5:30am it was early to bed the night before. You will need to set your alarm clock for around 3:45am. I know what you’re thinking, but trust me the loss of a full night’s sleep will surely be compensated for at the service.

The Memorial Park was a 20-minute drive from the city. You can make your way there by taxi or Grab, or as we did by the bus provided by the hotel. We then made our way through the jungle to the memorial site. It was a good 10 minutes along a boardwalk path. It was still quite dark, the path was dimly lit and everyone was moving quietly and peacefully to the memorial site. Local community groups such as the Girl Guides, Red Cross and of course military personnel were busy helping everyone get seated by 5:10am for the commencement of the service at 5:30am.

I was surprised by how little I knew about Sandakan and the close ties it has with Australia. Approximately 2,400 Australian and British prisoners of war (POW) were held by the Japanese in the Sandakan POW camp during 1945. They were used as a labour force to build a military airstrip. On three forced marches (known as death marches) between January and June, hundreds of prisoners died. Almost all of the remaining prisoners died at the Sandakan and Ranau camps. By the end of August only six — all Australians — had survived. Two of the six escaped into the jungle during the second march in June 1945.

The sun was just starting to shine through the trees catching the Obelisk on the way through. I couldn’t believe my eyes it was truly a beautiful sight. Birds were chirping and squirrels were darting between the branches. One couldn’t help think what a fantastic place to build a memorial for our fallen men.

The service was also attended by nine descendants of POWs, eight from Australia and one from Malaysia. Government officials from Australia as well as Malaysia and military personnel from Butterworth were in attendance. The most heartfelt moment of all during the service was the roll call of the fallen, where the relatives of those POWs who died in Sabah were invited to come forward and speak their relative’s name, and place a floral tribute. I have attended countless Anzac Day services, but this one seemed somehow very personal and emotional due to the fact the men we were remembering at that moment were grandfathers, uncles, brothers and even a father of the relatives standing before me.

After the service there was plenty of time to stroll through the beautifully landscaped and well maintained grounds. The park has a small museum, remains of an excavator, a generator and a boiler that still lie in their original positions.

In 1995 an agreement between the state government of Sabah, the government of Australia, RSL of Australia and the Sandakan Municipal Council resulted in the creation of this memorial site. The opening ceremony was held on March 18, 1999.

If you visit the Sandakan Memorial Park allow plenty of time to wander through the picturesque grounds admiring the lily ponds and the war relics and be sure to take a stroll through the museum. It’s hard to imagine that a place where such tragedy and atrocities took place now exudes peace and tranquillity.

The park is open seven days a week 8am – 6pm. Entry is free. If you are planning a trip to Malaysia in the month of April consider taking a tour to Sandakan and it’s Memorial Park, you won’t be disappointed.

Have you been to Sandakan? What destinations of military history would you recommend other travellers visit?