‘Postcard from Poland: A walk down Gdanska Street’ 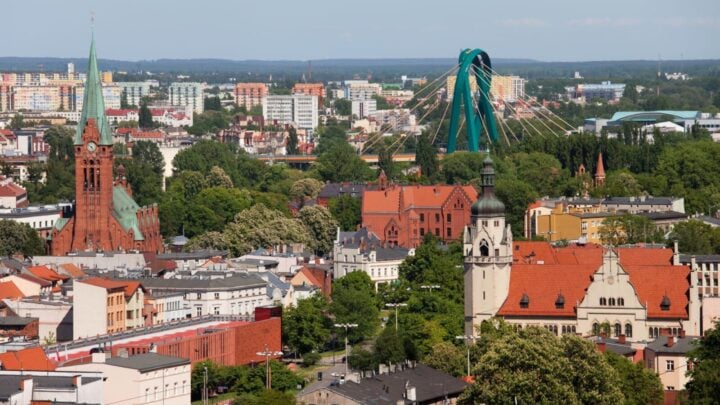 I’m currently living in the medieval Polish city of Bydgoszcz (pronounced ‘bid gosh tch’). My apartment is just a few meters from Gdańska Street, Bydgoszcz’s main street. I walk down this street almost daily either to buy groceries, visit one of the many trendy cafes or restaurants, or simply to breathe in some of the sights and history of this remarkable and beautiful street. Come for a walk with me and I’ll show you.

First, let me explain the origin of road construction of this street dates back to 1448 by the Teutonic Knights of this part of Europe. It’s thought they also founded the city. At one end of the street is the Brda River in the middle of town, while the other end vanishes into endless forests. The street connects the Old Town Road with the northern areas of Bydgoszcz. The city was an important inland river port.

A few meters from where I’ve penned this story sits the National Polish Radio Broadcasting building — a beautiful smallish Palace once owned by a wealthy German businessman. The building not only houses the National Radio Department but also a very stylish restaurant. In the building’s basement there’s a small museum, which was once was a prison and torture chamber were Nazis executed and tortured countless Polish and Jewish citizens. Gdanska Street is extremely rich in history, both tragic and victorious.

Along this street conquering armies marched victorious; Swedish, Lithuanian, German and Russian invaders all had their turn. All traces of the bloody battles between the Nazis and the Polish forces have long disappeared: and memories of the countless public street executions are fading quickly. Although the memory of the mass execution of 10,000 locals is understandably taking a little longer.

Gdanska Street was not always called Gdanska Street. From 1820 to 1920 it was called Danziger Street because at that time this part of Poland had been annexed by Germany. Bydgoszcz was also renamed Bromberg by the Germans. In 1920 to 1939 when Bydgoszcz regained it’s freedom from Germany it was rename Gdanska Street once again. From 1939 to 1945 it was renamed Adolf Hitler Street; a name befitting only the finest of streets — according to the Nazis. From 1945 to 1990 whilst under communist control it was again renamed; First of May Street, then finally in 1990 it reverted back to Gdanska Street. Did you get all that?

The last revolution to take place in Gdanska Street was in 1981 when citizens all over Poland people took to the streets rising up under the leadership of Lech Walesa, a shipbuilder from Gdansk, and finally ousted Russian-imposed communism. This successful rebellion was the catalyst for the demolition of the Berlin Wall and the liberation of several central and eastern European counties from communist tyranny.

Today’s peaceful Gdanska Street is one of beautiful neo-classicism, neo-baroque, neo-gothic and neo-renaissance splendour: buildings that have been lovingly restored to their original conditions and colours. These beautiful buildings house swish restaurants, cafes, galleries, antique shops, boutiques, medieval churches, medical centres and offices with residential apartments above. Access to the aforementioned can be easily obtained by city trams, which are free to all those aged 65 and over, even to an interloper such as me. The trams run every few minutes the length of the street. These trams are built in Bydgoszcz and are exported throughout the European Union.

Across the street from the National Radio building is a bronze statue of a man seated on a metal park bench. This is Mr Marian Rejewski, Eminent Mathematician and breaker of the Enigma Code; reads the accompanying plaque. Upon investigation and Google searches I discover that yes, Mr Rejewski from Gdanska Street did indeed break the Enigma code first. The Nazis then altered the code whereupon the British code breakers, using Rejewski’s formula, broke the code a second time.

A little further along the street is a newly renovated building, which houses one of the several music schools on Gdanska Street wherein Mr Rejewski had his modest code-breaking office. This 17th century building was originally a convent.

My favourite building is the Hotel Pod Orlem — Hotel Under the Eagle. This hotel is often used as a set for movies as it’s so beautiful. So beautiful in fact that my partner and I booked in for three nights just to experience the baroque splendour. We got a room with a balcony overlooking the street and for three days we sat in the warm sunshine watching the everyday comings and goings on Gdanska Street unfold before our eyes. At night I’m sure I could hear the footsteps of those invading armies upon the cobblestones outside my hotel window.

Almost opposite the Hotel Pod Orlem is a trendy art gallery. During this past winter snow covered Gdanska Street for more than six weeks and at times access to the street was limited. On some of these almost-arctic days it would have been foolhardy to impossible to venture anywhere in the sub-zero temperatures. I busied myself with my favourite indoor pastime — painting Australian birds. It’s a bit of a fetish of mine. That trendy gallery on Gdanska Street has agreed to display my ‘Birds of Australia’ collection, which has now grown to 36 paintings. My exhibition opens the first week in May. The gallery owner was astonished at the uniqueness and variety of birds that inhabit Australia.

If you ever get an opportunity to visit Poland I hope you can take a walk down Gdanska Street. You’ll be astonished.

Is there a place that has captivated you in this way?