‘How cruising aboard Silversea’s Silver Muse enhanced my wine appreciation’ 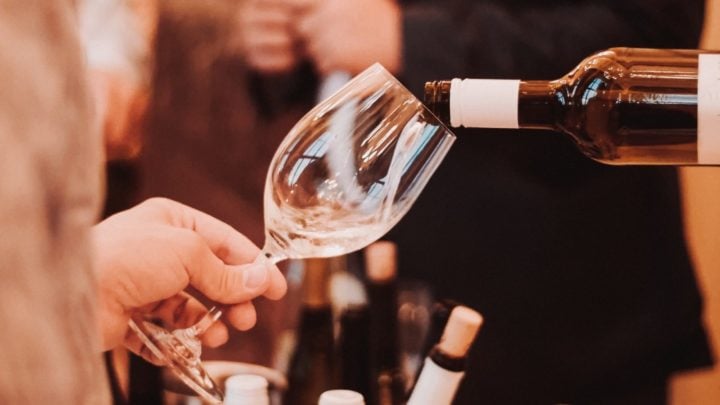 Geoff enjoyed the opportunity to expand his knowledge and enjoyment of wine while travelling with Silversea on-board the 'Silver Muse'. Source: Getty Images

On my recent cruise aboard Silversea’s flagship, Silver Muse, I was fortunate to be able to enhance my wine appreciation. No not at the bar (although that too was tempting), but at a series of fascinating lectures and wine tastings conducted on our ‘sea days’ by none other than Silversea’s wine ambassador, Lawrence D’Almeida. As soon as D’Almeida started speaking and announced that “wine is made to be enjoyed and good wine is the wine that you like”, I knew I was going to really enjoy this aspect of my cruise.

D’Almeida was raised in Paris and trained as a historian at Yale College and Harvard University in the United States. He sounds American but can speak five languages fluently and has lived in France and Italy where he has dedicated his professional life to wine. For eight years he was wine maker-manager at Villa Casale winery, near Greve in Chianti, Italy. Since then, he has been winemaking consultant on various projects and is currently the wine buyer and wine ambassador for Silversea Cruises. He knows a lot about wine, and is keen to share his passions for wine, food, history and culture with interested travellers — lucky for me because I am a history tragic and I love wine!

D’Almeida is far from boring. He is very lively, witty and entertaining but still informative. Best of all he is only too happy to taste wine at any time of day. He recanted a lovely quotation to set the mood in the first lecture — “Wine has the ability to banish care”.

At each of the three lectures I attended we savoured three wines from various regions ‘single-blind’. This meant we knew where the wine came from but nothing else. This allowed us to rely on our senses without any preconceptions that we may have about a particular grape, label, region or vintage. As the first wine arrived, we learned to twirl our glasses to release the aromas and really stick our noses into the glass as our sense of smell can provide information about the wine that our palette cannot and vice versa.

The first wine was a nice, light, balanced white, Vila Nova Alvarinho, from the Vinhos Verdes region in Portugal. This was followed, with a considerable gap, by the bright, red Pipoli Aglianico Del Vulture Basilicata from Italy. Aglianico is considered to be one of the three greatest Italian wine varietals. Our third wine, after another gap, was a rich and intense Tempranillo 2016 Bodegas, Arrocal Passion, from the Ribera del Duero region in Spain. I had never tried any of these wines before but loved each one of them. Surprisingly, all are reasonably priced and available in Australia — so I was starting to learn to be adventurous. What a fun way to enhance your appreciation of wine.

D’Almeida noted that generally we will gravitate to the wines we have become accustomed to, as is human nature, but he also encouraged us to experiment and delve laterally into wines that we are less familiar with. Who knows, one may become our new favourite?

Silversea’s wine selection is lauded by wine experts as the best on the sea by far, offering the largest and broadest choices of complimentary wines aboard any cruise ship, with roughly 50 different labels from all of the 11 major wine regions in the world. On top of that, as if you need a wider choice, there is a large range of premium wines for the discerning connoisseur available simply by asking the excellent sommeliers on-board. As you would expect on Silversea ships, Italian wines are particularly well-represented in honour of the cruise line’s Italian heritage. Local wines are often added to Silversea’s wine selection, enabling guests to sample fine wines from across the world. On my cruise from Singapore to Darwin, Australian wines were featured along with those from the US and Europe.

Whilst I love history, I must admit that I had very little knowledge of the history of wine. For instance, I did not know that all good wine today comes from numerous varietals (1,368 at last count) of the Vitas vinifera grapevine. This is just one of 60 vine species on earth with the other 59 relegated to table (eating) grapes. I also did not know that Vitus vinifera grew naturally in the region now known as Georgia, Armenia, northwest Iran and eastern Turkey, nor that wine is a natural fermentation of this grape species and occurs without human intervention. No wonder the Ancients believed wine was indeed Nectar from the Gods.

Wine became domesticated and a trading commodity 5,000 years ago and was a source of sustenance, particularly as water sources then were a bit irregular. Once the Romans came along, they took wine everywhere they went and spread viticulture throughout their empire. They were the first society to create substantial demand for fine wines. Fast forward to the 17th century when another Empire emerged and the English merchant and ruling class became the second dynasty to create substantial demand for quality wines, particularly from France.

Surprisingly, until 1865 it was thought that in the process of wine production sugar just magically broke down into alcohol. People had been making wine for centuries but did not really understand what was happening. When Louis Pasteur determined that yeast (critical to winemaking) had to be encouraged to grow, while unhelpful bacteria had to be killed, everything became clearer.

He found that heating wine to 50–60 degrees Centigrade killed unhelpful bacteria that could spoil the wine. He patented this method, called pasteurisation, in 1865. Pasteur also isolated the role of oxygen in winemaking and developed a process that controlled how much oxygen came in contact with the wine, and when, using both barrels and bottles. The science of winemaking had dawned.

In the 18th and first half of the 19th centuries, France in particular, enjoyed a Golden Age of fine wine and their reputation was unassailable. All that changed with the onset of phylloxera, a parasite that destroyed the roots of the Vitus vinerfera vines throughout Europe, followed by the further destruction of vineyards in the World Wars I and II.

As Lawrence D’Almeida puts it, people were too pre-occupied in the post-war years to focus on fine wine production, so France retained its crown as the eminent producer of fine wines until 1976, when a New World wine revolution began. The catalyst for this revolution was a famous wine tasting in Paris where the Chardonnays and Cabernets judged as best in the world came from California, US. Sacre Bleu!

France’s domination of fine wines was challenged and consequently, vineyards sprang up everywhere through non-European countries, including Australia. From that point onwards the US rose to become, and still remains, the third society to create a large market for fine wines.

Free from tradition, winemakers in these New World countries experimented and adopted a scientific approach to winemaking including temperature control, irrigation, hygiene and refrigeration. The final insult came in the form of the screw top wine cap instead of traditional cork. Initially developed in France in 1964 at the behest of Australian winemaker Peter Wall, the screw-top cap is now almost universally adopted in Australia and New Zealand. Again, Sacre Bleu! Is nothing sacred?

Here we are, only 50 years later, gliding upon a calm sea tasting wines from all over the world at 11am. It really does not get better than that. As D’Almeida states, there is no excuse now to ever drink bad wine, because there is so much quality wine freely available from producers all over the world, thanks largely to technological advances made in the New World countries. Sadly, I departed at Darwin and did not get to enjoy the fourth wine lecture nor the trip to Hunter Valley vineyards. Oh well, maybe next time!

If you are considering a cruise, then you really owe it to yourself to consider Silversea. I recommend that you also consider one of their wine cruises as you will really deepen your knowledge and appreciation of fine wines and create delightful memories. You get to savour some of the most exquisite wines the world has to offer whilst immersing yourself in a stunning variety of scenery. Silver Muse will be cruising Australian and New Zealand waters until May 2020. Be warned though, their wine cruises are very popular and book out well in advance, so plan early to avoid disappointment.

Disclaimer: The author was a guest of Silversea, which included accommodation on Silver Muse, tours and on-shore excursions. However, none of the parties reviewed or approved this blog and the opinions contained within are the author’s own.

Are you interested in wine? Do you enjoy wine tastings and visits to vineyards on your travels?