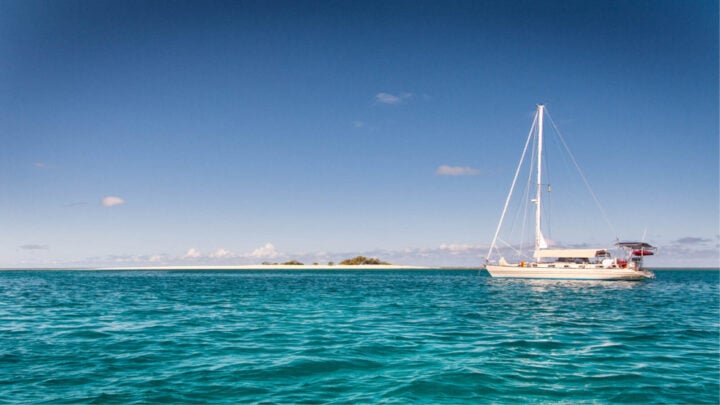 As we stood on the headland looking overlooking Manly Marina I asked Geoff whether he thought we would cross oceans in the new boat we were thinking of buying. His reply? “Definitely not!” He was emphatic. “What about you?” he asked. No, that wasn’t my intention either. I dreamed of lovely weekends sailing around Moreton Bay and perhaps some winter cruises to the Whitsundays to snorkel our beautiful coral reefs, but no sailing out there in distant international waters.

As we researched our ideal boat, we read a book called Dolphins at Sunset: A family voyage around the world written by Elizabeth Thurston. We immersed ourselves in the wonderful stories of her family’s cruising adventures aboard their yacht. The notion of sailing around the world visiting exotic ports and making lifelong friends who shared the same dreams and challenges resonated deeply in our hearts. Our plans changed and now the boat we were searching for took on a whole new persona. She would be well-built and strong enough to cross oceans, designed to handle strong conditions, able to be comfortably sailed by two people and comfortable enough down below for a couple living aboard.

When we found our yacht, Stylopora, she immediately ticked all the boxes, having spent 13 years sailing around the world with her first owners and another seven years in South East Asia with her second owners. Okay, so the boat is up to the challenge, but were we? Neither of us had sailed offshore before and were none too certain of how far we wanted to venture or if we had what it takes. Only one way to find out – just go! After months of coastal sailing and preparation, our first offshore test was a 400-mile sail to spectacular Lord Howe Island and back. The destination was fabulous, but the trip was rough. Whilst Stylopora was in her element and handled the conditions beautifully, I discovered the horrors of seasickness. Undeterred, we vowed to sail offshore again. It appeared we were hooked on sail cruising after all.

Four years later, Geoff took a sabbatical from work so that we could cruise with no time pressures to the magical paradise of New Caledonia. Why New Caledonia? As the island nation’s tourism website states: “Spectacular natural scenery, jaw-droppingly beautiful islands and a unique fusion of French and Melanesian culture make New Caledonia one of the true jewels of the South Pacific. With a UNESCO World Heritage Listed lagoon and only a 2-hour flight from Brisbane your next New Caledonia holiday is sure to be unforgettable.” A two-hour flight? Not for us. After all, we were now hooked on sail cruising, so we prepared Stylopora for our second ocean crossing.

Geoff inspected her from the bottom of the keel to the top of the mast, while I filled every cupboard, nook and cranny with long-lasting food for us and goods (mostly clothes and school items) to trade with the local villagers in both New Caledonia and ultimately Vanuatu. We serviced all our safety gear, life raft and emergency beacons (E-Pirbs) and stored our new paper and electronic charts on board. The weather was studied looking for a suitable window and our route planned. One beautiful sunny Friday morning in May, two friendly customs officers from Australian Border Force came aboard to officially clear us out of the country and off to international waters.

Stylopora heeled gently as we sailed out of Moreton Bay in a light south-easterly wind. We farewelled the Cape Moreton Lighthouse and were officially in the ocean. The waves became higher and were further apart. Moving around the boat now called for two hands and our actions were more considered as the floor moved between the time we lifted a foot and put it down again. When working on deck we wore inflatable life jackets and tethered ourselves onto to jack-lines, which ran the full length of the boat on both sides. None of us was keen to fall overboard and test the crew’s man overboard skills.

One question we’re often asked is: What do you do at night? There are no anchorages, marinas or moorings at sea, so we sail on, taking watches of two to four hours each through day and night. The trip was planned to take around six to seven days of continuous sailing, so we asked our friend Steve Lock to join us to assist with the watches and were grateful for his help and company.

Mealtimes quickly became our favourite time of the day. Steve and I had made enough frozen meals for the full trip to Noumea and our freezer was loaded with individual meal-sized foil containers with a multitude of menus. Half an hour before dinner it was: “What would you like for dinner tonight Steve? Spaghetti Bolognese, Chilli Bean Stew, Lamb Tagine or Green Thai Curry?” The individual containers would go straight into our gas oven and half-an-hour later – hey presto! Hot meals for three. Our oven is gimballed, so swings as the boat rolls to prevent spillage. It works well, but standing close by when it’s swinging and with any sort of hot liquid on top is terrifying and I try not to get too close.

When planning this passage, Geoff had carefully chosen light weather conditions, but perhaps we went overboard (not literally) because on Sunday the wind died, the seas flattened, and we were becalmed! All we could see in all directions was the beautiful flat deep blue ocean. It was an awesome experience. We were, however, not going anywhere, and this is why we have a good reliable motor – although we could patiently float for several days and wait for the wind. These glorious conditions continued, and we motored continuously for four days. This is of course, not what sailors are supposed to do, but we carry enough fuel to motor for approximately 1,000 nautical miles and although the continuous sound of the motor became monotonous, we made good time.

“Who’s for a swim?” I asked after lunch on Tuesday. And, after a brief discussion about sharks and other sea monsters, we jumped into beautiful clear water two miles deep. Fearing the nightmare of the boat sailing off without us, one person remained on board and we trailed a long rope behind, but there were no ripples on the surface to indicate new wind and no sign of Stylopora going on without us.

When I woke for my morning watch on Wednesday, Geoff cheerfully asked: “Fancy bacon and eggs on the barbeque for breakfast?” Well, yes! Usually, the barbeque’s off-limits when we’re travelling because as the boat moves the breakfast slides into the ocean.  If only all ocean crossings were this comfortable.

Even when the weather’s beautiful, however, it pays to be watchful. We set a 15-minute timer to stay awake and remind us to have a good look around at the boat, the sails, the sky and the ocean. It takes only 20 minutes for a ship just beyond the horizon to be too close for comfort. Just after 1.30am on both Tuesday and Wednesday mornings, Steve was on watch when we were hit by sudden short squalls. These are the nightmare of being on watch on your own. Even with a full moon to light the sea a little, they are no fun. The other nights though are magic and sitting out in the cockpit on your own, leaning on a comfortable cushion watching the moonlight reflect off the water as we slide by is a memory I will always treasure.

Geoff was on watch at 7.30am Monday when he saw a small white dot on the horizon morph into the catamaran, L’Attitudes with our friends Vicki and Toni Little on board. Vicki and Toni left Southport several hours before we left Manly and they were the only other yacht we saw in seven days. After a short, but exciting chat via our VHF radio, we continued our respective courses. The cruise ship Pacific Aria passed us as we neared New Caledonia, but we saw no one else.

Land Ho! Modern navigation methods are so good that there was extraordinarily little chance of sailing straight past New Caledonia, but it was an incredible relief to see the hills behind Noumea right where they should be.

Seven days after departing Manly Marina, we sailed past Amédée lighthouse, which marks the entrance through the coral fringing reef and into the vast World Heritage lagoon that protects the western coast of Noumea. The marina was full, so we found a safe, but crowded anchorage just outside. French is the primary language in Noumea and checking into the country involved several dinghy rides to complete the paperwork for Customs, Quarantine, Immigration and Port Control. Fortunately, English is widely understood by the immigration and custom officials and the experience overall was pleasant enough once we worked out where each office was located scattered around Noumea. After this feat, we celebrated with lunch at Le Bout du Monde (the end of the world) restaurant at Port Moselle marina before going back to our anchorage for a heavenly night of uninterrupted sleep without our usual night-watch system.

Sitting in the cockpit with a morning coffee after eight full hours sleep, we looked around us at boats from all parts of the world, meeting up in one small port in an isolated corner of the South Pacific and marvelled at our good luck and fortune to have been able to join these other nomads in their desire to see the world in their own slow way.