Roll-up with your pocket money for laughs galore! 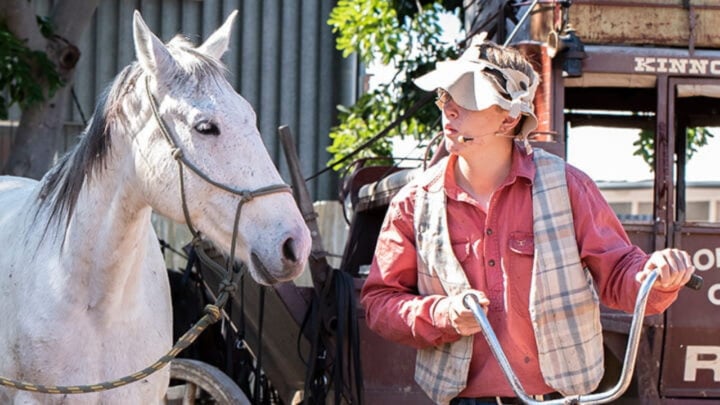 The Harry Redford Old Time Tent Show is just one of the many unforgettable experiences in Longreach. Image courtesy Outback Pioneers

Growing up in outback Queensland, the highlight of our year was the travelling tent show. By the time I was a kid, these shows were part of the annual agricultural show but still had the excitement and quirky surprise of the travelling shows that had been a tradition since the early 1900s. For our 20 cents entry, we knew we would have fun, laughter, music and entertainment.

When the shows as I knew them went out of fashion or were replaced with musical performances, a colourful history was lost with them.

I wanted to give visitors to Longreach the chance to step back in time and enjoy a unique cultural tradition with our re-creation of the old-time tent show. For older folks, it’s a chance to relive the fun of their youth and for youngsters it’s a chance to experience the simple fun of an earlier era.

The early travelling tent shows often focused on boxing contests, giving local lads the chance to try their luck to win some money. Like the American shows, they also featured humans with unusual or extreme conditions, a practice that was dying out when I was a boy. Acts like rodeo rider Lance Skuthorpe with his horse Sugar were legendary in Australia in the middle of the 20th century and inspired every bush kid.

What didn’t change over the years was the ingenuity of the showmen in finding competitions and entertainment to capture an audience.

From Smoky Dawson with his amazing horse Flash to Tex Moreton with his vaudeville entertainment, to Jimmy Sharman’s knife-throwing, there was still plenty to captivate my generation when the show came around.

Everyone would dress in their best and, with pocket money carefully budgeted for rides, fairy floss, hot dogs and tent show entry, we’d be ready for fun.

One year when the Gill Brothers show was in town, my elder brother, a cousin and I were determined to win the $50 offered to anyone who could catch the show’s donkey. Of course, the donkey was trained to kick and avoid capture but we had a plan. $50 was a lot of money then and we thought we had a good chance with the bag of carrots we had bought and hidden down my cousin’s pants!

When Mr Gill invited contenders to come forward, we stepped into the ring. He said only one person was allowed but we persuaded him to let two of us have a go.

My cousin pulled the bag of carrots from his pants.

Mr Gill said, “You can’t do that!” and the crowd was roaring with laughter.

The donkey kept turning his backside to us and wouldn’t even look at the carrots. As soon as we’d get close to him, he’d kick out.

Our time was soon up and we ended up throwing the bag of carrots at the donkey! We didn’t win the $50 of course but Mr Gill offered my brother a job after that!

It was all part of the fun for the audience to be involved and to take the mickey out of someone from the crowd.

The best of the old-time atmosphere

Creating our Harry Redford Old Time Tent Show here in Longreach, I wanted to reinvent the excitement and simple humour of those shows but we had to find a way to do it in an era when we have to be more careful about who and what we laugh at.

Although it’s part of our outback humour to take the mickey out of anything and everyone, we don’t want to offend our guests. We have to ask our audience to understand that it’s all about laughing at ourselves and not taking life too seriously.

Animal welfare is much stricter these days too and we have to make sure all the animal treatment and training meets RSPCA standards.

We pick animals that have a mischievous spirit and enjoy participating. Then, with a few months of training on the job five days a week, they know the ropes. If they do the wrong thing or head in the wrong direction, that’s all part of the fun for the audience. The mistakes aren’t all intentional but all can be part of the show with some clever ad-libbing!

When you come on a Starts at 60 holiday to Longreach and Winton, the Harry Redford Old Time Tent Show is included. Don’t miss the chance to experience our unique outback culture. Roll up! Roll up! See a horse with its tail where its head should be!

Discover more of the outback’s secrets and unleash your own pioneering spirit on a 6-day holiday to Longreach and Winton. You’ll cruise the Thomson River at sunset, hear about a grazier’s life from your Kinnon family host, ride the Cobb & Co stagecoach along the original bush route, and much more.

Do you have any happy memories of other travelling shows from your childhood?