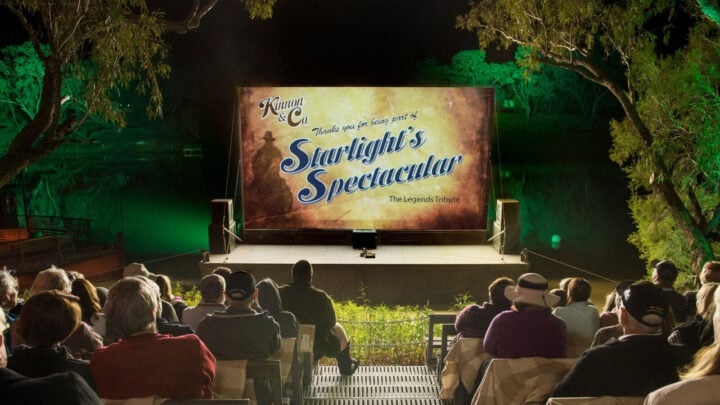 Had it not been for the larrikin spirit in outback Australia, we’d all have gone crazy! This spirit allowed us to laugh at ourselves and the authorities who made life more difficult than it already was, which helped boost pioneers’ morale. It gave us a sense of survival and taught us not to take ourselves — or life — too seriously.

Our larrikin heroes were not so much ‘villains’ but people who enjoyed outsmarting the toffs (society’s upper-class) and silvertails (those who were socially prominent) of their day. Larrikins stood up for what they believed in and weren’t afraid of saying what they thought. Some were ratbags, but many had a good heart.

Some of that fun side of bush life has disappeared over the past 20 years or so. But we’re doing our bit to keep the Australian larrikin spirit alive here in Longreach!

Our local larrikin hero is Harry Redford, a cattle duffer (thief) also known as Captain Starlight. His story is one that captures the spirit of outback pioneer times. And it’s a story that has inspired me since I was a boy.

Walking in a larrikin hero’s footsteps

Our family station did a lot of branding and it is customary that, when you buy cattle, you add your brand below the previous owner’s. When I was about six years old, the ringers would talk about the ‘Harry Redford brand’, where if your brand was similar to the previous owner’s, you could add a piece of your brand to the original instead. This is the method Harry Redford used to rebrand his stolen mob of more than 1,000 cattle, disguising their true ownership. He then took them on an incredible journey from central Queensland’s Bowen Downs Station to South Australia.

I had no idea then that four decades later I’d own a station that was originally part of Bowen Downs. Nor did I know I’d be showing visitors the ruins of Captain Starlight’s stockyards where he rebranded the cattle, cleverly changing the LC5 brand, which would have been easily recognised, to U06.

That’s one of the unique highlights of the Outback Pioneers Nogo Station Experience.

When we purchased Nogo Station, we’d already established a small tourism enterprise in Longreach. Being able to share Captain Starlight’s history was one of the main reasons for buying Nogo. In addition to the original stockyards, visitors can also see the nearby spring and billabong where Harry Redford and his accomplices camped while stealing the cattle.

Guests on the Outback Pioneers Nogo Station Experience visit our re-creation of the Harry Redford camp and can sit at the exact spot where the adventurers camped for nine months while they selected and branded their cattle.

To make sure everything is authentic, we’ve used sketches found in the journals of Jimmy Johnsson (one of Redford’s accomplices) to create the scene on-site. It appears exactly as it did in Redford’s day.

Sometimes our visitors will even see our white bullock coming down to the water. The white bull was an integral part of the Captain Starlight story, as you’ll learn if you come out this way. I’ve been down to the billabong on a moonlit night and have seen our old white bullock wander to the spring. It’s a sight that makes it hard not to believe in spirits of the past!

At the height of his fame, in the late-1800s, Captain Starlight’s exploits were revered. It’s been said that he was a good-hearted fellow, everyone admired him and the ladies loved him! He always carried a bible and never carried a gun.

He might have ‘borrowed’ a horse but, if it was no good, he’d return it. He was the only thief who would return an unwanted item rather than sell it!

Sometimes he’d travel in disguise to a race day with a good horse disguised as a flea-bitten nag. The bush people knew and backed the nag, while the city folks looked on in disbelief as the scruffy horse won!

Of course, his most famous accomplishment was navigating more than 1,500 kilometres through wild country with his huge mob of stolen cattle. It’s said he knew more than a dozen Indigenous languages and learnt to navigate by the stars from Indigenous Australian people in the areas he passed through. His ability to navigate by looking at the stars is how he earned his name, Captain Starlight.

A story worth sharing

England has Robin Hood, Victoria has Ned Kelly, but Queensland’s Captain Starlight is every bit as fascinating as a larrikin hero.

When I was researching tourism in the United States, a man in Oklahoma asked me if I knew the story of the famous cattle rustler from central Queensland who travelled to Adelaide in the 1800s. Harry Redford’s story is known beyond Australia, and he deserves to be even more widely known here. I believe our children should learn the story too.

Redford did so much to open up central Queensland to the rest of the world. He encouraged resilience. He knew there was a future for the Australian outback and that we could navigate ourselves through this country.

You can experience life as an outback pioneer when you visit Longreach and join us on tour. In addition to visiting Captain Starlight attractions at Nogo Station, we also offer a sunset cruise along the Thomson River, a stockman’s campfire dinner with Starlight’s Spectacular Sound and Light Show, and a station safari.

These experiences are our tribute to a legend of the region, whose stories have been passed from generation to generation. Redford’s larrikin spirit, mischief-making, bushmanship, bravery and good heart were an inspiration to those who faced the tough challenge of survival in the pioneering outback.

If we can live with some of the courage, life-skills and humour Redford had, we’ll all be doing A-okay! And we don’t need to steal any cattle either!

Explore the Longreach and Winton region with its rich pioneer heritage and outback landscapes in 6 days (5 nights). Discover the Captain Starlight story at Nogo Station, cruise the Thomson river at sunset, ride the Cobb & Co stagecoach and much more.

Had you heard of Harry Redford? Is a trip to the Queensland outback on your bucket list?