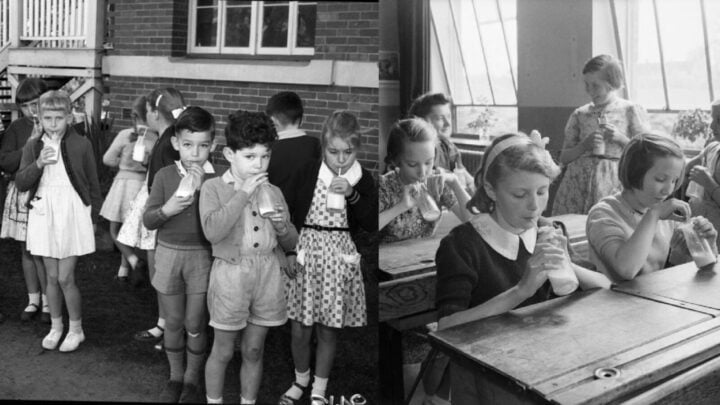 Anyone who was forced to down a glass of milk a day while at school in the hot Aussie summer months probably doesn’t have the fondest memories of the drink, but it looks like those teachers of ours were onto something after all.

A new study published in the International Journal of Obesity has found that drinking milk on a daily basis could lower your risk of heart disease. Heart disease is an umbrella term for a range of conditions that affect your heart like blood pressure, coronary artery disease, heart attack, heart failure and stroke.

The world-first study, which was conducted in partnership with University of South Australia (UniSA) and University of Reading in England, used a genetic-approach to investigate casual relationships between milk consumption and risk of cardiovascular disease. Assessing genetic biomarkers among more than 400,000 people, the researchers found that greater milk consumption was associated with lower blood cholesterol, lower blood lipid levels and a lower risk of heart disease.

UniSA researcher Professor Elina Hypponen said the findings help sets the facts straight about milk, after the dairy variety has seen a drop in popularity alongside the rise of plant-based milks.

“People have long had a love-hate relationship with milk, which is not surprising given the mixed messages about dairy,” she said.

“While some reports show that high dairy and milk consumption is linked with cardio-metabolic risk factors, evidence from randomised controlled trials have been inconsistent.

“In this study, we conducted robust genetic tests to assess whether milk was associated with an increase in heart disease, and while we confirm that milk can cause an increase in body fat, we also show that it leads to lower cholesterol concentration and lower cardiovascular disease risk.

“The risk reduction could be explained by milk calcium, which has shown to increase the enzymes that break down fats within the body and thereby lower cholesterol levels.”

Heart disease is the leading cause of death in Australia, claiming the life of one person every 29 minutes, and it’s seniors who are most at risk.

According to the Australian Institute of Health and Welfare, there are a staggering 1.2 million adults in Australia living with one or more conditions related to their heart or vascular health, and more than four in five cardiovascular disease hospitalisations during the 2017-18 period occurred in those aged 55 and over.

Meanwhile, according to the Heart Foundation, heart disease kills an average of 50 Australians a day and someone is hospitalised for heart disease every three minutes. This high percentage of heart disease is primarily related to high blood pressure and high cholesterol.

Do you still drink a glass of milk a day? What are your memories of mandatory milk at school?