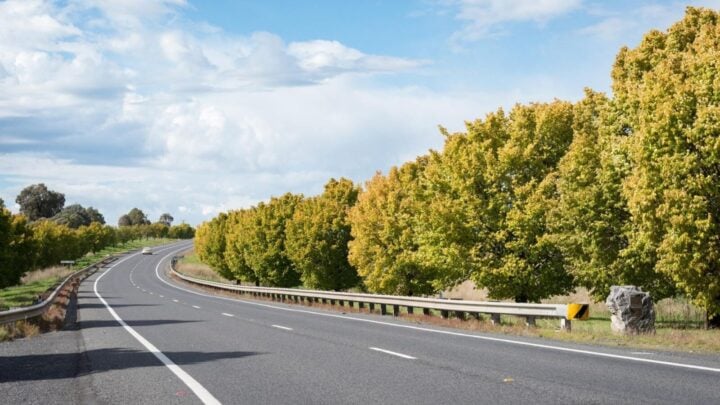 Many Australians are hitting the road to escape the city for a much needed tree change that is subsequently boosting the regional property market. Source: Getty.

Homebuyer interest has spiked in parts of regional Australia, providing a silver lining for homeowners outside of capital cities who may have been worried about the double-digit price drops forecast in the wake of Covid-19.

Data from property analysis company CoreLogic showed that dwelling values across the nation’s combined regional areas dropped by just 0.1 per cent between March and the end of July, while capital cities’ dwelling values were down by 2 per cent over the same period.

CoreLogic attributed the price stability in regional areas to the fact that the regions hadn’t been impacted by the drop in net migration amid the coronavirus. Almost 85 per cent of migrants to Australia flow into capital cities. CoreLogic noted that even before Covid-19, regional areas were benefitting from rising demand for “lifestyle properties” near the coastline or offering wide, open spaces.

“Population densities are generally lower, which is something that might be even more appealing as we move through this pandemic,” CoreLogic added. It picked out New South Wales’ Illawarra region as having recoded both the biggest property price rises and the biggest jump in home sales volumes in the 12 months to end-July, while Victoria’s Ballarat had the best selling conditions, with homes selling in just 30 days and with minimal discounts.

Demand from sea-changers and tree-changers can be seen in the search data from realestate.com.au, which reported this week that there’d been a surge in interest in secluded ‘lifestyle’ properties outside the capital cities in the first half of 2020.

Properties that offered secluded bush settings, as well as coastal retreats and metropolitan mansions outside of big cities were among the most-searched dwellings on the popular property sales site. One of the top spots on realestate.com.au’s list was taken out by a sprawling property in Dural in Sydney’s Hills Shire that boasted 61 parking spots in and around the home.

Other popular areas for potential buyers were the Northern Rivers, Central Coast and Southern Highlands regions of NSW, as well as the Mornington Peninsula in Victoria. The site’s economist Nerida Conisbee said that as well as lifestyle factors driving buyers’ decisions, home-working had likely freed up some to seek properties further from their workplace for the first time.

As Covid-19 continues to ravage Victoria more so than other state, agents report being flooded with inquiries from Melburnians looking to escape the city. Data from Domain found that some regional areas had seen the number of views per listing increase by nearly 600 per cent in July compared to the same time a year ago, while previously popular inner-city locations experienced a fall.

While views of properties in Melbourne’s inner east fell 11.8 per cent year-on-year, and the inner city fell 7.5 per cent, areas including Bendigo, Warrnambool and south-west Victoria and Labrobe/Gippsland views rose. As noted by realestate.com.au, the Mornington Peninsula was another hotspot.

The area with the greatest jump in the past year, however, was Ventor on Phillip Island, with an incredible 577 per cent rise in views per listing in the year to July.

Why people are ditching the city

Buyers generally leave the cities for regional areas in search of lower-cost housing that can provide a first step on the property ladder, but some property experts have observed that older buyers seeking less populated areas were also driving the popularity of some regional areas.

Speaking to Starts at 60 earlier this month, Karim Belcaid, chief operating officer at Agent Select, said that while price was definitely a key factor, over-60s in particular appeared to be questioning whether it was worth continuing to live in a capital city.

“We’re also seeing in that age group a big change to get out of the city and have a tree change or lifestyle change,” he said. “They know they can go alright with Zoom and technology and everything is delivered to your door now, so they’re wondering if they even need to stay in the city cluster.”

CoreLogic did, however, remind buyers that regional areas had their downsides. Regional areas can suffer more volatile economic conditions due to many smaller cities often being heavily dependant on a single industry to fuel the local economy. Regional areas may also lack easy access to essential services.

Do you live in a capital city? Have you been tempted to move to a regional area?