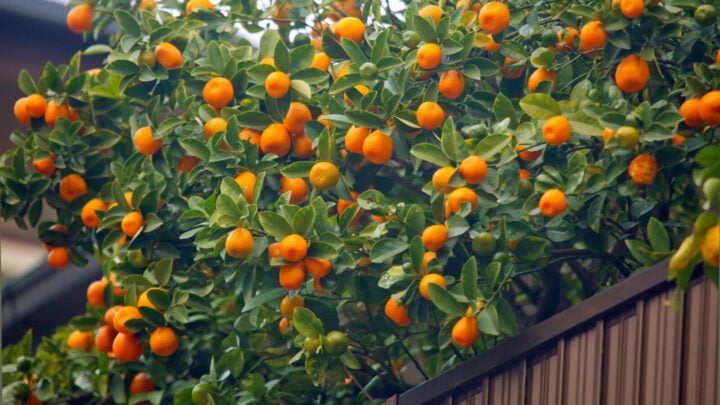 Mandarin trees are often alternate bearers, which can mean you’ll get a lot of fruit one year and only a few the next. Source: Getty

When brilliantly coloured citrus fruits start flooding fresh produce markets at this time of year, many a gardener asks themselves the same question: “Is it time I grew my own?” And the answer is yes! Citrus varieties flourish in most parts of Australia and autumn is a great time to get a tree in the ground and settled before winter arrives. In fact, why stop at one?

Citrus trees are a triple delight. The fragrant spring blossoms are followed by a super-colourful fruit display, which often light up the tree right through the winter months. Plus you get to harvest them for everything from fabulous cakes and jams, to your nightly gin-and-tonic. What’s not to love?

The easiest orange to grow is ‘Valencia’, which is a reliable cropper and bears fruit over a long period (often from spring right through to autumn). Sweeter and larger of fruit is the ‘Washington Navel’, which bears from late autumn through to spring, though it’s not quite as consistent a producer as ‘Valencia’ in backyard situations. For lovers of marmalade, ‘Seville’ is the perfect choice, with its signature sour fruit.

Arguably the most ‘pickable’ of citrus fruits (and irresistible to kids), mandarins produce abundant crops. The variety ‘Imperial’ is a favourite, with fruit ready to pick in late autumn, while the equally popular ‘Emperor’ crops a little later. Then there is ‘Honey Murcott’, a mandarin-orange hybrid with many seeds and tight skin. It’s worth knowing that mandarin trees are often alternate bearers, which can mean you’ll get a lot of fruit one year and only a few the next.

‘Eureka’ is an ideal backyard lemon, as it crops for much of the year in mild climates, while ‘Lisbon’ is equally popular – both are taller growing varieties. Shorter in stature and better suited to colder climates is the ‘Meyer’ lemon, which bears sweeter, less acidic fruit. ‘Meyer’ lemons are also available in dwarf form, so they’re the best variety for growing in tubs – look for the cultivar ‘Lots A Lemons’.

If you’ve ever wondered where the name of this citrus came from, it’s a reference to the dense clusters of young fruit, thought to resemble grapes. The most popular backyard variety is ‘Marsh’, which ripens from early winter and can be picked over several months. Because it fruits in the cool months of the year, it’s largely untroubled by fruit fly. ‘Wheeny’ is another popular variety, though its fruit contains a lot of seeds. If you’re after a grapefruit with beautiful pink flesh, check out ‘Thompson’.

Limes are naturally small trees, so they’re great for smaller gardens or growing in large pots. The ‘Tahitian’ lime is the most popular variety and is a prolific cropper. The Kaffir lime is grown not for its fruit (which are wrinkled with little juice), but for its double-jointed leaves, which are fabulous in Asian cooking. Plant one in a pot by the kitchen door for easy harvesting.

Australia’s native finger limes bear narrow cylindrical fruit in shades of green, yellow or dark red, on small prickly plants. The fruit pulp is quite unique — like little beads of juice that give a refreshing burst of flavour in the mouth — and they’re often referred to as ‘lime caviar’ among foodies. While they may not be the prettiest tree in the world, they’re a great ‘bush tucker’ curiosity to include in your garden.

All of the most popular citrus varieties have the same basic growing needs. They prefer mild to warm climates, but will also tolerate cooler conditions providing winter frosts are not too severe. Lots of sunshine is essential to ensure good fruit formation — at least five to six hours a day or more.

In terms of soil, most average garden soils are suitable, as long as the drainage is good. They don’t like heavy clays that drain poorly, as this can lead to root problems. If you do have a heavier clay soil, work in some sand and compost to lighten it up, and create a raised bed, about 30 centimetres above the surrounding soil.

When it comes to feeding, all of that flowering and fruiting uses up a lot of nutrients, so you’ll need to feed trees at least two to three times a year. The ideal feeding regime is late winter, late spring and once more in early autumn. Use good-quality plant food that is formulated for citrus and water in well. For potted plants, apply a slow-release citrus fertiliser

Scale insects: These look like small round discs on stems and leaves. Spray affected parts with a horticultural oil as soon as they are noticed.

Bronze orange bugs (aka stink bugs): These suck the sap out of new growth and developing fruit. You can knock them off and squash them, providing you wear eye-goggles and protective clothing (they can squirt an irritating liquid). Alternatively, spray them with an insecticide such as Yates Nature’s Way Citrus & Ornamental Spray, which is registered for their control in the home garden.

Did you find this article helpful? Do you have a question for Roger?