The secret lives of milkmen 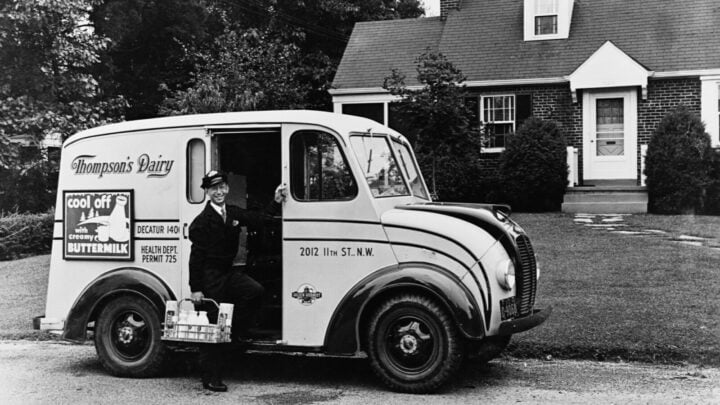 Lately, there has been a renewed interest in home deliveries; no doubt encouraged by COVID lockdowns and the uncertainty of venturing out to shop. Source: Getty

Lately, there has been a renewed interest in home deliveries; no doubt encouraged by COVID lockdowns and the uncertainty of venturing out to shop. However, home delivery was a thriving part of suburban life in the 60s and 70s. Bread, milk, soft drink, newspapers, fruit and veg, and ice blocks (or icy poles as they are called down south).

As a five year old in 1964, I was fascinated with the milkman or ‘milko’. I remember sneaking out into the garden at 3 am after hearing the clip-clop of his horse and cart coming up our street. I’d hide in the garden and watch him jog up the driveway and replace our empty milk bottles with full ones. Usually ‘gold top’ but sometimes the new-fangled homogenised ‘blue top’. The horse knew our street was a cul-de-sac, so it did a U-turn and waited patiently for the milko to return to the cart. Not long after this the horse and carts were phased out.

In 1971 Benny Hill’s ‘Ernie, the Fastest Milkman in the West’ climbed the charts and I wondered about the secret lives of milkmen.

In my early teens, I got to discover some of the mysteries of milk runs when our milkman asked me to be his offsider on his afternoon milk run after school. My pay varied. Sunday to Thursday I received $4. Friday netted me $7 because it was a double delivery, with Saturday being a day off.

In Queensland, it was hard work running around in the heat with a dozen milk bottles, but usually, on Sundays, there was someone having a BBQ who would invite you in for a beer. In fact, my first beer and prawn night happened as a 15 year old when my boss and I were called into a backyard at about 5 pm. Two hours later we staggered out still with several hundred bottles of milk to deliver. We faced the music the next day with complaints (legitimate) of mucked up deliveries. Much beverage cheer also ensued on our Christmas Eve deliveries. Fortunately, most customers supplied us with takeaway beer with only a few insisting we have a drink with them. Christmas was also exciting as plain old milk deliveries were peppered with dozens of special orders for cream, custard and egg nog.

In the late 70s, I started leasing my own milk runs. Afternoon runs were social, and you got to have a chat with the customers. You may be familiar with the old jokes about newborns having the same hair colour as the milkman. That never happened to me, but one female customer who worked as a professional did offer me a spa and massage at her establishment in lieu of paying the milk bill. I diplomatically offered her an extra week’s credit instead.

Night milk runs were less social and seeing a customer could sometimes spook you when they would suddenly stick their head out of a window and call out “I’ll have an extra pint please”. You then tried hard to look like you didn’t really need a change of underwear. I had a few what I’d call supernatural events. One night a figure in white appeared out of nowhere and pushed past me. I turned around instantly to see what was going on but there was nothing there. Another time as I delivered milk under an old Queenslander house, an old rocking chair that was stored there, began to rock noisily back and forth. This happened every night for two weeks. I shone my torch on the chair looking for secret strings as part of a prank but never found any.

A big problem was milk money disappearing before I got to it. Customers thought up these fiendishly clever hiding places for the money such as under the doormat or behind the pot plant six inches away from the milk bottles only to be surprised when an aspiring criminal mastermind whisked the money away. The odd theft here or there was okay, but when you had a run of them in a night you got to spend most of the next morning (being a milko’s normal bedtime) visiting your customers to explain the problem and negotiate a new hiding spot.

Aside from these individual instances, I was never actually robbed on any of my milk runs. Even though a bottle of milk only cost 14 cents I often had a few hundred dollars in a brown bucket on the front seat and the doors were never locked. Similarly, over eight years I only had a couple of customers move house without paying the bill. Most would chase you down to pay you after moving and apologise for not catching up earlier.

Some of you may have been woken at night by random swearing outside. It may have been that your dog had latched onto some human flesh or there is a good chance it was your milkman tripping over a garden hose, bicycle or in one instance an ornamental fountain that wasn’t there the night before. I know you had every right to put whatever you wanted in your front yard, but just remember that your milko was probably working on sleep-deprived autopilot when he came to deliver your milk while trying out your new obstacle course.

In the early ’80s, supermarkets began price cutting milk and also occasional industrial action at the big dairies meant that sometimes the milkman had to drive fifty or more kilometres to country dairies to pick up their supplies. All of this led to the eventual demise of the milko, but if you listen carefully sometimes at night you might (to quote Benny Hill) “hear the sound of ghostly gold tops a rattling in their crates”.

Oh, and a couple of times mine nearly was the fastest milk cart in the West, when half asleep, I forgot to put the handbrake on at the top of a steep hill.