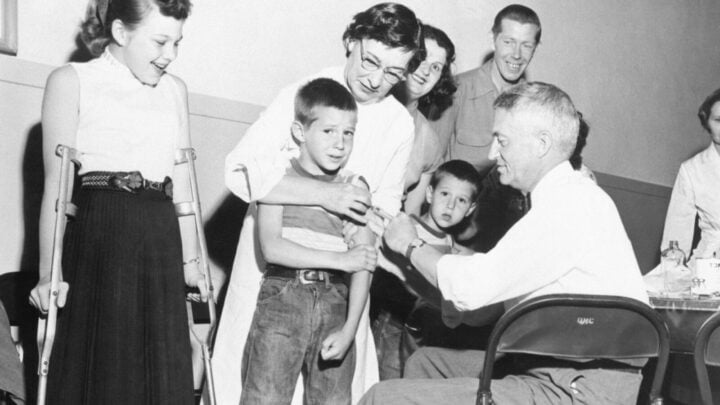 Doctor giving a shot of the Salk anti-polio vaccine to a boy, 6, while the boy's sister, 12, a polio victim, looks on, in April 1955. Source: Getty

“Have you washed your hands?” It was the question my mother always asked as we sat down at the dinner table. It’s not that she was fastidious with cleanliness, it was more her way of protecting us from the ravages of polio.

Australia experienced a polio epidemic in the early 1950s, and it was every parent’s worst nightmare. I still recall my grandmother making up little camphor bags for us to wear around our necks to school.

The present pandemic has revived memories of that era, when there was widespread fear across the nation each time another outbreak of the disease occurred. Thousands of children spent months in special isolation wards, unable to breathe outside the “iron lungs” that kept them alive. It was not uncommon that — in almost every community — children were affected and would suddenly disappear from school or the playground.

And it was not only children who were affected by the disease. Official figures show that between 20,000 and 40,000 people had paralytic polio in Australia between the 1930s and 1960s. The figures for the total number of people — some only mildly infected with the virus — are up to a hundred times greater, between 2 and 4 million Australians.

One of the great problems was that nobody really knew how it was transmitted. They only knew that people had to be isolated. It was definitely the ‘dark side’ of the 1950s!

We now know that poliomyelitis is an infectious viral disease that hits the central nervous system, causing temporary or permanent paralysis.

Tess Driver writing in the book Growing Up in Adelaide in the 1950s tells the story of how her life changed when her mother came down with polio. “One day my mother was there and the next day she was gone,” she wrote. “Because the first symptoms of polio resemble the flu, with aching joints, she thought that was what was wrong.”

Tess goes on to tell of the heartbreak as her family was quarantined because the virus was so contagious, and how her whole world fell apart when the family was split up and eventually vanished. Her mother disappeared into hospital, her baby brother went to live with an aunt, her father was unable to look after her due to pressure from his work, and she went to live with her grandparents. As a young child, she did not know her mother was desperately ill and “that she would never be the same mother I loved”.

Her story of absolute despair is shared by others who were also affected by the disease. Polio victim Diana Wood recalled people staring at her because she wore a half brace on her right leg. “I remember when I was told that I didn’t have to wear it anymore, I asked my mother why people were still staring at my foot. I didn’t realise that I was walking with a distinct limp because my right foot had dropped quite substantially.”

Many people reading this today will have friends or family who are still suffering from the post-polio effects of the virus in their 60th and 70th years.

The first glimmer of hope for preventing the spread of polio appeared in Australia in 1954 when it was reported that a new vaccine was being tested on people for the first time. The story tells of how “experiments” were underway in Melbourne, Sydney and Adelaide of the new ‘Salk’ polio vaccine and, although it was too early to announce any results and build up false hopes, the tests were “proceeding satisfactorily”.

The vaccine was eventually proven to be effective and in 1956 the Australian Government launched a mass immunisation programme for the prevention of poliomyelitis. All school children and pre-school children were immunised as part of the campaign.

I have vivid recollections of lining up at school with all my classmates to get “a needle” and trying to be brave and show no fear. A former classmate, Karen Preston, also remembers getting the jab. “It was in a van near the school library. I think I would have been six or maybe seven. I recall that the needle was held over a flame to sterilise it. That scared me more that the pain from the injection!”

The mass vaccination programme was successful and the number of polio victims reduced dramatically over the next few years. My parents — and I imagine all parents across Australia — breathed a collective sigh of relief.

I often say that nostalgia is a wonderful thing. It can produce a range of emotional responses on so many levels, but it can also create a distorted view of the past, where we tend to forget the nasty or horrible events and dwell instead on the more pleasant aspects of our life at the time. While most of us treasure the memories of our childhood, the polio epidemic of the 1950s cast a dark shadow over the decade, and its legacy was devastating for many families of that era.

What memories do you have of the polio epidemic?