‘I recall the day I opened a book and the strange, black scribbly blobs turned into words…’ 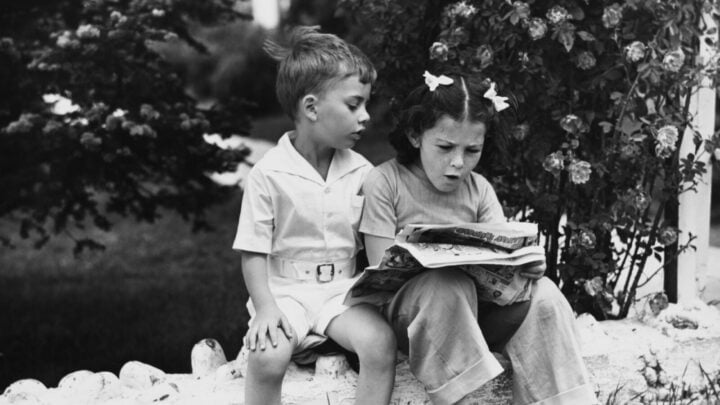 "I recall the day I opened a book and the strange black scribbly blobs turned into words..." Source: Getty

Remembering back to 1945, a little 5-year-old dot of a girl (yes I am that old, you do the maths on that one), I recall the day I opened a book and the strange black scribbly blobs turned into words. I don’t remember the book, BUT I COULD READ!

Thinking back, it was probably whatever was the most common in schools at the time.  Maybe the Dick, Jane and Spot books, remember those?

Realising I could read was as though I had been touched with a magic wand. Actually, I still feel that way, although these days, my page-turnings are delivered to me with the touch of a stylus (or fat finger… I do tend to mislay the stylus).

Back then, there was just Mum, Dad and me, and we moved about eight times. In those days there were always kids to play with, on the street. We usually played cowboys and, as we called them, itchy bums. The girls were always the itchy bums, and let me tell you, I was felled by many a cap pistol. However, I digress.

Although my Dad was well-educated, books weren’t featured in our home. All I had to read were my school books, and whatever Sunday School books that I brought home. When Enid Blyton entered the schoolroom, I earnestly thought that all of my Christmases had come at once.

Grampa, as we called him, lived with us and had a well-worn bible. It too was carefully perused, the pages as fine as tissue paper. As I grew a little older, I shocked my mother when I asked the meaning of the word ‘begat’.  Her answer to this shocking little question: “I will tell you when you are older”. Apparently “older” means never, who knew?

It seems impossible but it is true, my Mum and Dad never gave me a book. I had aunties who put the occasional one in the post, and I chose many a friend by the books they had, (or, should I say, my ability to borrow their books).

Book worms will understand why I say that I was utterly starved for the written word.

My second Grampa used to bring home goodies from the tip. To my delight, two books were given to me.  Scourge of the Swastika and Knights of the Bushido, complete with pictures. A notoriously confronting piece; but not to me. However, the kids in the street had nightmares for some time after perusing those pages.

Then, eventually came the day that we moved permanently to a suburb in Melbourne. Mum joined the lending library. You paid in those days, and it wasn’t cheap: Two books for a shilling.  My pocket money was saved, and although they kept no children’s books, I was allowed to choose one book from the lending library. The librarian’s eyebrows did rise at my choices, but Mum never noticed that I was borrowing an author called P.C.Wren, the first book Beau Geste. Beau Geste was all about the French foreign legion. I’m certain that it would be termed a horror genre now; people being captured, buried in the sand, heads coated with honey and eaten by ants.  I loved them, LOL.

When I met my husband at 16, books again played a part in this momentous occasion. He asked if I had read any Georgette Heyer.  Well, what a coincidence that was. I had picked one up from the op shop that week, and loved it. Very few 18-year-old boys of my acquaintance would have even opened a book, let alone historical fiction! (He proposed that same night, and I accepted).

Life moved on. Being a wife and a mother, I was still getting my book fix when I could afford a paperback. Otherwise, I visited the op shop, Four children took up most of our cash.  Then a miracle happened … a library was to open where we lived.   All four of my children had been given books as babes, and as a result, they too, are book lovers.

On opening day, a the local library, I packed up the four of them for a special outing. One in the pusher, another sitting on a board placed across the front. Number three was sitting on the hood, and my eldest walked beside us.

I’d packed a sandwich and a drink for each, and we walked to this place of magic and mystery to discover that we were the first in line. Well, we were an hour early!

The local paper took our photo. My mum was like a cat with two tails, she was so proud.

Then, home we trundled with all the books our hearts could desire.

No matter how many audiobooks I listen to, or digital books I read, nothing can beat the thrill of opening a real book, and turning that first page.

Do you remember the day you realised you could read?