‘Women of the war: Remembering the brave nurses who cared for our boys’ 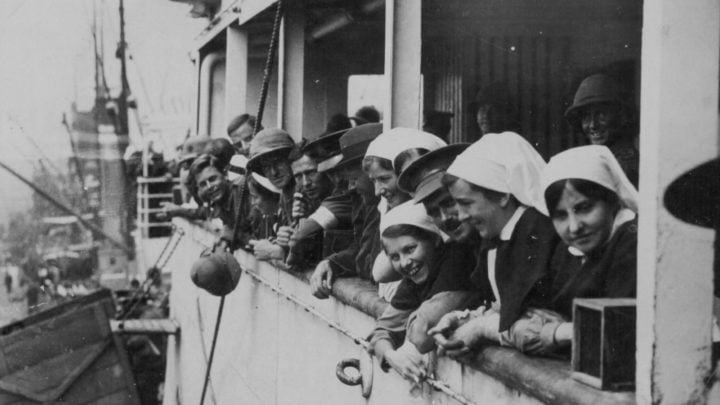 Like the nurses in this photograph, Julie's aunt, Sister Vera, helped soldiers during the war. Source: Getty Images

As Remembrance Day approaches, I put pen to paper to compose a tribute to an inspirational nurse in our family’s tapestry. She was my great-aunt, Sister Vera, a persevering brave nurse.

Vera was brought up in a devout family on a farm, way out west. Her mother passed away quite young, so Vera raised her younger siblings. When they were old enough, she travelled to Melbourne, way back when, to study nursing at St Vincent’s Hospital.

Vera graduated with honours, then nursed for a while. The Japanese bombed Darwin, Broome, and Pearl Harbour, so all bets were off. It was all shoulder to the wheel, a battle against totalitarianism. Vera enlisted as an army nurse and sailed overseas.

Vera and her sister nurses endured a torrid time. They nursed our soldiers in the field hospitals, right behind the front lines in the armed conflicts with the Japanese. There was often heavy bombardment as the medicos and nurses valiantly battled to save the lives of the diggers.

The army nurses in the tropics were always scared in case they were captured by the enemy at any stage. The fate of white women at that stage in history was not good. Some nurses did wind up in prisoner-of-war camps, starved or tortured. Or some were captured to be sex slaves of the Japanese.

After treatment in the army field hospitals, the wounded soldiers were transported back for recovery in Australia. Sister Vera persevered, nursing her soldiers, in very basic conditions. Having dodged the submarines, Vera always placed her duty to her country and its soldiers first. This was true for the remainder of her nursing career.

Once peace was attained at great cost, in 1945, Sister Vera decided to nurse the soldiers in the Repatriation Hospital. This was a large part of her vocation, being inspired by the valour of the Australian diggers.

Sister Vera, the perseverer, became a matron here. She was affectionately known by her male patients, as Bully Vera. This was quite some time ago. Vera became a hospital legend. Her patients had to behave themselves during their morning bedwash, pyjama change and sheets being changed. Sister Vera would then reward good boys with a cigarette each, to smoke in bed, as they lay on the starched white clean sheets, with immaculate hospital corners.

Sister Vera would sit at the nurses’ desk, calmly surveying all the good boys, smoking quietly, having bed rest. Vera nursed the old soldiers until the end, as her duty and devotion. A real nurse, until she retired. Inspired, and inspirational, a gutsy woman, one of the brave army nurses of her generation.

Sister Vera was self-sufficient until her demise at a ripe old age. Gone, but never forgotten. For valour. Lest we forget.

Do you have someone in your family like Sister Vera?