‘When I need to balance the madness of the world, I think of my grandpa’ 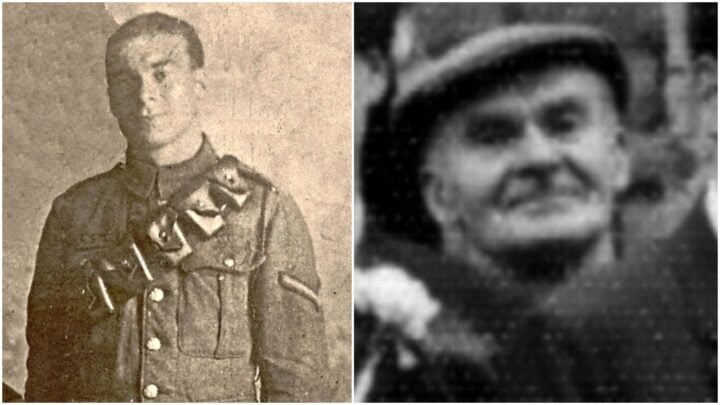 Jacqui's grandfather Thomas Sage was a kind and gentle man, despite all the horrors he endured. Source: Jacqui Lee

I remember my grandpa letting me dig in the garden, showing me fresh peas and encouraging me taste them. He was a gardener, son of a baker, and his parents owned a bakers shop in Bristol. He was also a fabulous wood carver, he made a chair for the Welsh Eisteddfod his skills and gentle nature made him loved by all. He used to come out to our house in the wilds of Gloucester and spend all day gardening. He was quiet and gentle and loving. His wife of many years died and he was never moody or sad. He just smiled and put his old cap on and picked up the shovel. Mum fed him her famous sponge cakes and he was content.

His name for me was ‘Jacko’. “Here Jacko,” he called, “come and taste these raspberries.”

Then we would gather up some more produce and go and sit in the orchard drinking tea. I would sit with him as he told me about moths and mice and other creatures, he named the birds stealing our apples, and put a blue bag on my arm when I got bitten by a wasp.

Yet in the past that gentle man had been gassed in France, had seen horror and death, had known the trenches in a place like hell. He did not ever say anything much about it. He was not damaged by it, he just absorbed it, and instead of keeping it like a knife in the heart, he chose to forget. He made a good home for his wife and children. His triumph was having a safe home, and a table loaded with food he had grown.

He fought for freedom, and I wish I could accept that what he fought for has become so tarnished, he would not recognise it. He fought for a place to lay his head, warmth for the children, shelter from storms, and a country with a hard working tradition.

We have become a greedy, unkind community instead. We see fashions that defy dignity, we grab and steal, and treat others badly; language and all standards are becoming lower each year. We condemn the craziest things, the cancel culture decries nursery rhymes that have taught children to enjoy imaginary characters. We teach three year olds about sex, and yet censor a cartoon potato for being the wrong gender, in case that harms a child … It does not make a lot of sense to me.

I need to remember my grandpa more and try to balance this madness. He could have ranted and raged about the horror of war, or lamented when his boy and girl both had rheumatic fever, his beautiful middle son died of TB, which was devastating (especially as he had only been married a year or so).

Yet he kept on being his gentle self, he was always there for them all. Sitting with his tea, and wearing that distinctive cap. Bringing in fresh green beans, and helping out at the church opposite where he pruned apple trees and worked in their garden too.

Grandpa was there for my wedding. Sadly when I had three children and lived a long way from him, I lost my contact with him. I regret that most of all. I was unable to travel with three children under three, as it meant two long bus journeys.

He had a fall from an apple tree, he was nearly 90, and did not really recover after that. I could not get to him, my husband had to work as he had a new business, so I didn’t get to say my final goodbye. But his legacy is gentleness, and forgiveness, so I hope in my blood and in my soul I can be more like Grandpa. He will have forgiven me even if I can’t find that myself.

I will forever see him in the orchard at Cuckoo Lane, sipping his tea, and telling me stories. It may be the image I need when the crazy world implodes. The blossom from the plum trees dropping in our hair, and his rucksack full of home grown cabbages and potatoes. An image to keep in my mind, like a shaft of sun in darkness.

Who do you turn to when you need to get some perspective? What memories do you have of your grandparents?