‘What a phenomenon: How Elvis Presley is helping us get through the pandemic’ 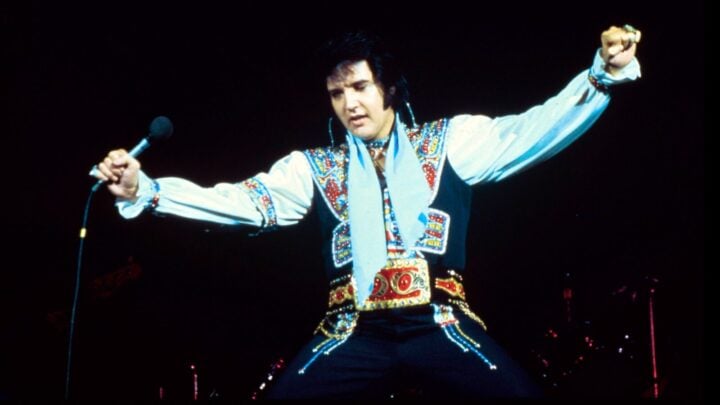 Elvis performing live on-stage in 1975. Julie says his music is helping her get through the coronavirus pandemic. Source: Getty Images

Thank heavens for music. Today and yesterday, sometimes music has kept most of us going.

I was listening to the golden oldies radio station one afternoon recently. Oh, Elvis, that voice! It took me back to when my older sister became a teenager. Celebrating, she received a little portable record player, and a couple of platters to play, the start of her music collection.

Yes, golden oldies like us can recollect EP’s of Elvis Presley. Hers was called Flaming Star. I think it had two tracks on either side. My younger sister and I had to sit and listen to Big Sissie spin the disc. Amusingly, to annoy the senior member of our sorority, we turned up the speed of the record player. Elvis started to sing ‘Are you lonesome tonight?’ as fast as he could, sounding like a lovelorn chipmunk. It was as funny as. Baby Boomers made their own fun.

Elvis is still a legend. Years later, I assisted a friend of mine with some research. I learned that no sociologist or linguist can explain why there are currently ongoing Elvis Presley conventions, large and popular gatherings of Elvis impersonators. There are Elvis lookalikes, men who wish to sing like Elvis, wear their sideboards and hair like Elvis, people who wish to collect souvenirs of Elvis, recordings of Elvis, view old films Elvis made. No one really knows why, a mystery.

One male friend of mine, a younger person, said once, on Elvis’ anniversary. “What’s the big deal? That fat b*******’s been dead for years!”

Well, that was his opinion. Elvis conventions, despite the pandemic, are still being planned. It is a world-wide phenomenon, a cult in its own right. Elvis impersonators appear at any age in any land.

Even in Australia, we have our own Elvis capital, in Parkes, New South Wales. The annual Elvis festival to commemorate his birthday is one of the main festivals in Australia. Thousands of people are already booking special Elvis train or plane tickets for 2022. Pandemic pending, these fans shall join other Elvis worshippers in days of delights.

Elvis Presley had a beautiful, deep voice. His influence on rock ’n’ roll shaped our appreciation of music. Graceland still exists, a centre for a global franchise, like a mecca for the Elvis faithful. Years after his demise, too young, still no one knows why some folk around the world today, at any age, want to sing and play guitar, dressed up in pantsuits like Elvis. Their kids never hear any other music. Some offspring become miniature Elvis, some might learn to hate all rock ’n’ roll. It is their father’s thing, not theirs.

So, Elvis the chipmunk did sing. ‘Are you lonesome tonight?’ Not really, thank heavens for music!

Are you and Elvis fan? Is music helping you cope with the uncertainty surrounding the coronavirus pandemic?