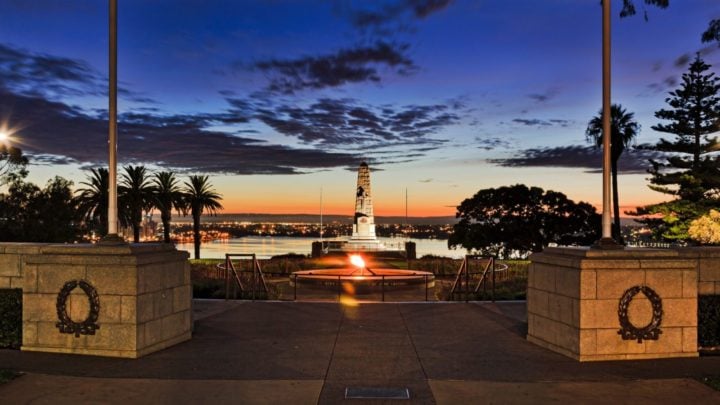 It is still dark, and we have managed to find a parking spot behind the old Hale School. Our city is quiet and our excursion towards the State War Memorial, is an affront to its silence and wakening. There are like-minded people around us, warmly dressed in coats, beanies and scarfs.

We have a 15-minute walk into the early morning stirrings of Kings Park, Perth, Western Australia. It is 5am on April 25, and Fraser Avenue is shrouded in a canopy of ghost gums. The path is not well-lit, but we know the way, just follow the crowd, some have torches and lead us on. The air is cold, and we can see and feel, the moist exchange as our exhaling warm breath meets the cold morning chill.

Most families are sombre as we trek on to honour the sacrifice and service of the Australian and New Zealand Army Corps (ANZACs)in World War I and II, and the subsequent wars and military operations of Australians since those two remarkable world battles.

We quietly walk on towards the Memorial precinct, collecting more families; our humility and unity growing. It is impossible to not feel the connection or hear the voices of young children questioning their parents. Where are they going, and why are they going? And to not listen to the hushed response of their parents reminding their off-spring of the observance of this special day.

At the Memorial, still in darkness, we orderly shuffle into position. Torches now off, we respectfully stand and wait. Unexpected sneezes, coughs and throat clearings are uniformly disguised as is the sound of whispering parents and their little ones.

In the background we can hear quiet orders given and boots shuffling as various military corps, returned soldiers and other ANZAC delegates and notables position themselves for the dawn service.

As the darkness fades, and the dawn begins to expose herself, we are all ready. A faint smell of pine, rosemary and eucalyptus from surrounding gardens enhance our senses and anticipation, as we fall into a companionable silence. A silence only broken by nature’s alarm clock, the early morning call of birdlife. The setting is perfect.

There is no announcement, just noises, the call to attention, of the monument guards, the movement and positioning of themselves and their rifles as they undertake their ceremonial ritual.

We strain to see through partial light, as dawn has not quite broken. The distant sounds of the city rising are now mixed with the two-by-two walking sounds of people stepping up to the Cenotaph to place their wreath.

A glance towards the east and our beautiful city reveals the rising of the sun; it is not yet fully exposed, but the preceding light is allowing us more vision of the long-held ceremonial rituals.

A short speech by the State Governor welcomes the several thousand honouring the occasion and gives sanction to the sacrifice of the 8,600 Australian Diggers lost at Gallipoli. He requests the crowd remain standing and hold our silence for the reciting of ‘The Ode’.

We listen in ghostly silence as a meaningful rendition of ‘The Ode’ is read aloud:

They shall grow not old, as we that are left grow old.
Age shall not weary them, nor the years condemn.
At the going down of the sun and in the morning
we will remember them.
Lest we forget.

Our silence is held, and in the hauntingly beautiful background of the city sunrise, ‘The Last Post’ from a lone bugle is sounded, followed by two minutes of commemorative silence.

Our peaceful contemplation is shattered with the nearby firing of a military cannon. Its booming sound alerting all to flight or fight. Birdlife take to the sky, their initial cry and panic silenced by the resounding boom reverberating from the park.

The morning sun is now spreading its warmth, giving hope for our future as the bugle sounds ‘The Reveille’, the soldiers’ call to wake. It is comforting and reassuring, a special moment felt by all.

A musical rendition of the ‘Australian Anthem’, followed by the customary salute of fly-over jet-planes from Pearce Airbase concludes the ceremony. Military staff are given ‘fall-out orders’, and returned soldiers and dignitaries start to disperse. Some to attend the Gunfire Breakfast, others to join the ANZAC Parade through the city and others to their local RSL or bar. All to remember the fallen in their own special way.

As the formation clears, we move forward to view and admire the commemorative wreaths that surround the War Memorial. Dawn is now past, and the sun, the new beginning, provides the perfect emblem, the Australian rising-sun, with extending rays surrounding the Cenotaph. Kings Park has once again met the brief, providing a peaceful and picturesque setting for Anzac Day remembrance.

Lest we forget. We will never forget!

How will you be commemorating Anzac Day this year?