The many phases of Christmas Day 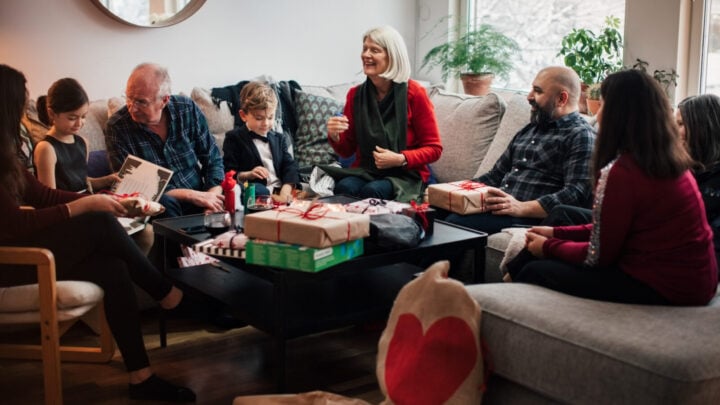 Apparently, we don’t remember our first or last birthday, or so those in the know say. The same could generally be said for your first and last Christmas. I do, however, remember one key moment from my second Christmas.

Living at Caulfield in Melbourne in a very old Californian bungalow, my dad decided to emulate Santa (AKA Father Christmas back then) by climbing through the window to my bedroom. He’d managed to borrow a Santa suit from my uncle, and my toddler memory is of a very realistic Santa trying to get into my room. I say trying because, as Dad later admitted, Santa and his costume became quite stuck while navigating the narrower-than-expected gap between the casement window and the window sill. Luckily, my language skills at that stage weren’t advanced, so I probably didn’t understand some of the words he said. I’m sure it wasn’t all, “Ho, Ho, Ho.” Anyway, he did get in eventually, and the image of Santa’s visit is etched in my memory.

Recalling this recently,  I started to think about the various stages of Christmas we go through in our lives. The childhood stage is full of traditions. Stockings over the fireplace (again, we lived in Melbourne), cookies and milk (or sometimes beer) left for Santa, lying awake expectantly on Christmas Eve and finally falling asleep only to wake up at 1:30am and being told to go back to bed after sneaking down the hallway to the possibility of presents, were all traditions in the Evans household.

In the 1960s, it was common to look out the window just after dawn on Christmas morning and see multiple brand-new bicycles cruising up and down the street. Some were ridden independently, while others had bleary-eyed fathers (who’d possibly been up all night assembling the blessed things) tagging behind with a hand on the back of the seat to prevent wobbly riders from spending the day with grazed knees or worse. All of these bikes came equipped with a bell or horn, which was used liberally to alert everyone in the street that it was, in fact, Christmas morning. If you listen carefully now on Christmas morning, you may instead hear the beeping of the latest game console.

After the delight of present unwrapping, some kind of breakfast was squeezed in between mouthfuls of Quality Street chocolates. There was usually a bit of time for neighbourly present comparisons with other kids in the street or a quick game of a brand new Twister, Hands Down, or Mousetrap (although I’ve yet to see anyone play this Heath Robinson inspired game beyond setting it up to see the clever machinations of catching the mouse). Christmas mornings flew by, and before long you were herded into the shower, dressed in your “good clothes,” before the sometimes long trip to whatever relatives’ turn it was to host Christmas lunch or dinner. Even at a young age, it was easy to detect some of the careful parental planning involved in coming up with a Christmas Day itinerary that would work for both sides of the family. A nuclear family can possibly have two sets of grandparents, aunts, uncles, and the attached cousins. With a blended family, the numbers can escalate further. So if your family wasn’t hosting that year, a lot of the day was spent in transit between relatives.

One of my favourite Christmas Day visits was to my Auntie Von and Uncle Bill’s place. Aunty Von served the dreamiest Christmas puddings, complete with hidden threepences, and you didn’t get to leave without taking home a gingerbread man that, from my memory, was as big as a Barbie doll. Uncle Bill had real live peacocks roaming the backyard on our non-Christmas visits, but on our Christmas visits, they seemed to disappear, probably aware of what was happening to their turkey cousins in the kitchen.

This pattern of meeting up with cousins, uncles, aunts, and grandparents was okay until the teen years; however, by this time, so child psychologists tell us, our friends start to gain more social sway, so an enforced day away from hanging out with your mates can start to be a drag for a terrible teen. But we hung in there for the food and possible pressies and stayed strong during the pinched cheeks and “My how you’ve grown” comments from doting aunts and grandmothers.

Not long after this period, Christmas Day enters a new phase where, as well as attending your family’s yuletide events, you start to get introduced to your boyfriend’s or girlfriend’s family traditions. My first Christmas with my girlfriend, and now wife, started with a phone call from her on Christmas morning wondering when I was coming over. At the time, I was busy installing a present from my Mum and Dad, a new Clarion cassette deck, in my Ford Escort panel van. I didn’t know at the time that her family had been waiting around for me to arrive before anyone could open presents. I learned my lesson for the following year. These new family connections extended the travel requirements and also brought a whole new set of uncles, aunts, cousins, etc. to meet and try to attach names to faces on the off chance you saw them again in the following years.

The next phase of Christmas kicked in after marriage, when, as newlyweds, we were included in the rotation of hosting Christmas Day. As first-timers, we wanted everything to be perfect, so our preparation was akin to that of the Normandy invasion. Food was the number one priority, followed by alcohol and the right choice of music. A barbecue breakfast with ham steaks and eggs kicked things off. Lunch had the usual ham, chicken, and prawn focus, with every possible version of coleslaw, rice salad, and pasta dish available. Of course, the puddings, custards, and lashings of cream dollops followed. Dinner, if anyone still had room, was a smorgasbord of leftovers. In between each meal, Quality Street chocolates, potato chips, pretzels, beer nuts, and those funny little tins of stripy wafer tubes full of chocolate paste made sure our digestive tracts knew they were going to be working hard all day.

The Boxing Day trip to the tip, where dozens of like-minded Christmas Day hosts queued up to dispose of their rubbish bins full of already whiffy prawn shells, chicken carcasses, and off custard and cream, was a traditional follow-up to our Christmas Day. Keeping in mind this was before the advent of recycling bins or even any thought of recycling, there was also a forest of wrapping paper, paper plates, and paper cups to dispose of. A second Boxing Day tradition in our family was the Boxing Day sales. With our Christmas gift vouchers in hand (no gift cards then), we’d battle the other overstuffed turkey and pudding shoppers looking for a bargain. Back then Boxing Day trading was limited to a few regional towns so it was just as well you were well-fed the previous day in preparation for the shopping road trip.

A few years later, when we had our son, I wanted to give our three-year-old a Santa memory akin to my earlier memory. However, I got a bit carried away with trying to prove Santa’s veracity. I set up a Santa suit stuffed with balloons in the backyard and had a cassette tape running with “ho, ho, ho” and sleigh bell sound effects. I even had a pedestal fan blowing on the balloon-stuffed Santa to simulate movement. My plan was to take my son to the kitchen window just as he was ready to nod off to watch Santa in action. However, this backfired because our traumatised little boy had heard stories about Santa not coming if he saw anyone peeping at him on Christmas Eve. He demanded that he be allowed to go back to bed. There was definitely a lasting memory created there.

Time moves on far too quickly, and before long your own children enter their next phase of Christmas, where they come to visit you while starting off their own traditions. I guess that is part of what it’s all about and what makes every family’s Christmas experiences both unique and similar at the same time. What Christmas Day traditions have your family been part of over the years?