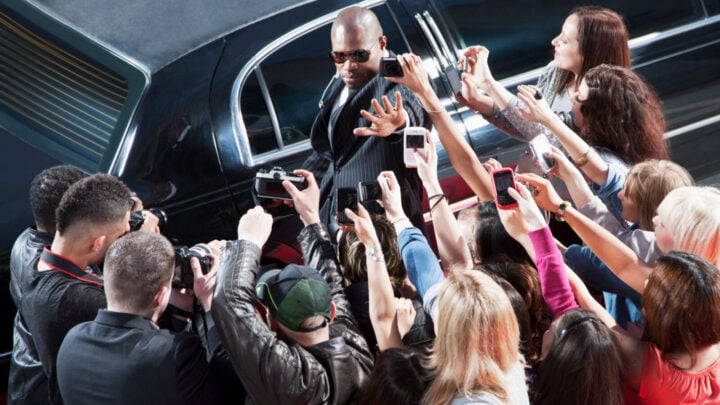 This blogger recounts his celebrity encounters throughout the years. Source: Getty

We’ve all had sightings of or meetings with famous people. Some of these may have even been stalkings. No judgement here.

I’ve jotted down some of my celebrity experiences over the last 60 years. It’s not intended as any kind of brag list when you consider my criteria for a celebrity encounter is that it happened within a distance of six metres, any conversation was optional, and it was probably an accidental meeting.

Also, I’m working on the old version of famous, not the current one, where someone who eats 500 hot dogs in 30 minutes while doing somersaults on a trampoline is suddenly thrust into the social media spotlight.

In 1970, our very resourceful primary school teacher, Mr Nothling, somehow had connections to Sir Edmund Hillary who visited our school and our classroom to talk about being the first person to reach the summit of Mt Everest. Hearing firsthand the challenges he and Tenzing Norgay faced during their ascent, it was easy to detect the mountaineer’s determined character, but this was tempered with a sense of humility, as he acknowledged the many other climbers who had made it part way in previous attempts. It was only in later life that I learned that his path to the top was often outlined with the frozen bodies of earlier, less fortunate climbers.

Kerri-Anne Kennerley was about 15 years old when I met her. She was Kerri-Anne Wright then and was a co-host of the kid’s television show the Channel Niners. As a then nine-year-old boy, chosen from the studio audience, I was star-struck by the blond teenage beauty I’d been watching on TV. I can’t remember much about the event, except I think I had to tell her a very lame joke about sleeping tablets to be in the running for a prize.

As a school kid, I’d seen the Queen and Prince Phillip from a distance when they visited Queensland, and school children were bussed to the Gabba to watch them do a royal lap of honour. In 1982, the Queen and Prince Phillip visited Brisbane for the Commonwealth games. My wife and I were doing a bit of Friday night shopping in the city. As we were waiting to cross at the lights at the bottom of the Mall, there was a bit of a police escort rounding the corner, followed by the Royal Rolls Royce. The Queen was seated on our side, and as she drove by she gave us a wave. As there was eye contact made and there was no one else waiting at the lights (and it fitted into the 6-metre rule mentioned above), I’m calling it a meeting.

I met Russel Barnsley at a mate’s bucks party. It’s a name I can pretty much guarantee you haven’t heard of, but I’m sure you’ve heard of a little group called the Bee Gees and their seminal song Spicks and Specks. From a conversation with Russell, it turns out he was their original drummer when they were trying to make a name for themselves in Sydney. The brothers Gibb got on well with the owner of a small recording studio in Hurstville and had fairly unlimited access to the studio when it wasn’t in use by more famous bands. Russell told me that this meant it wasn’t unusual for him to be woken at all hours of the night by a Bee Gee or two, keen to use his drumming skills. At one point Russell was offered the opportunity to travel with the brothers to England to seek fame and fortune, but as he was a teenager, his parents preferred that he continue with his apprenticeship as a butcher.

On a trip to Sydney, I was walking to a meeting at a pub in Bondi when coming the other way was Michael Caton. He had just appeared in The Castle as Darryl Kerrigan and was all over the media. As we approached each other, I nodded and only just stopped myself from saying ‘Gidday Darryl’ and changed it to simply ‘Gidday’. He gave me a smile and returned the greeting. I refrained from asking how the serenity was as I’m sure he’d already heard it a thousand times. He later went on to endear himself to us in Packed to the Rafters and of course the recent Kit-Kat ads.

Bernard King was well known in the 70s and 80s as a talent show judge and television chef. His scathing comments to would-be singing, dancing, or comedy stars, either kept viewers in stitches or provoked outcries of disgust. Bernard famously told Keith Urban to ditch country music if he wanted to avoid mediocrity. I saw Mr King in person in the late 1990s at the local showgrounds where he was doing a cooking demonstration from a sideshow caravan. I was expecting some of the sardonic wit I’d seen on TV but was surprised at how polite and patient he was with some of the gathered crowds’ off-topic questions. You can’t believe everything you see on television.

In 2010, I accompanied two students to Sydney for an awards presentation. One of the presenters was rock star Tim Farris, the lead guitarist for INXS. After the award ceremony and while the students were getting publicity photos taken, I found myself standing next to Tim and we chatted for about ten minutes. The conversation initially covered fan interest topics such as the band’s early experiences cutting their touring teeth in isolated mining towns in Western Australia. We then shared our respective children’s current activities, in a similar fashion as two dads might while they were picking their kids up from school.

During the lead-up to one of the federal elections, years after his being Prime Minister, Bob Hawke fronted up to our local shopping centre with the current candidate. I took my son along, as it’s not often you get to see an ex-prime minister up close. He struck me as the same blokey bloke we saw on TV as Prime Minister. No lectern or dais or affectations. He just stood on the footpath outside the candidate’s shopfront office and chatted to the dozen or so people there about current topics, and he threw in the odd wisecrack about the current Howard government. I half expected his endorsement of the candidate to paraphrase his America’s Cup comment by saying that ‘anyone who doesn’t vote for such and such is a bum’, but this was not to be.

I can’t remember who ‘such and such’ was so he obviously didn’t meet my celebrity criteria.

So which celebrities have you bumped into over the years and how did you find they compared to their public persona? Who would you like to meet? My wishlist to meet in the future includes Paul McCartney (I’m a Beatles tragic), the Queen (closer than 6 metres and with conversation), and Rowena Wallace (I’ve been a fan since her Barrier Reef and The Rovers days).