‘The day my mum’s secret diary came to light’ 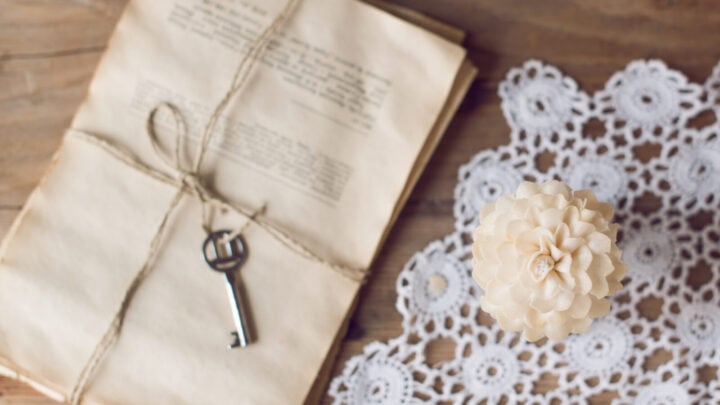 The diary dated back to the late 1930s, my sister Polly reckoned. Source: Getty

It was a lovely funeral, as funerals go. Everything looked to be just right: enough floral tributes to fill a cathedral, glistening black cars (grandson Ted had his own dealership) and a decent throng of neighbours, parishioners and nosey-parkers all displaying doleful expressions and clutching soggy hankies – but really just there not wanting to miss this send-off for someone who had been a stalwart churchgoer and parishioner for more than 60 years. That would be my mother.

Even the English weather had obliged: it was miserable, cold and drizzling, even though it was mid-July, and it set the scene just perfectly. Mum would have been pleased. In fact, at Dad’s funeral nearly 30 years before, when the weather had been equally obliging, I remember her saying as we entered the chapel, “Happy is the corpse the rain falls on.” I thought it rather a strange comment to make, but she said it in a rather dreamy, hypnotic voice, so maybe she was still trying to process the fact her husband of 48 years was now gone. She did confide in me some time later, on one of my rare return visits to the place of my childhood, that it had taken her months to stop setting the table for two.

Sister Polly, three years my senior, had done a grand job of organising everything, which I was deeply grateful for, being the prodigal son who hadn’t lived in England “since Adam was a lad”, as Mum would have said. I always got on well with my family – two brothers and one sister – but the thought struck me that maybe that was because I had lived on the other side of the world for all of my adult life. “Absence makes the heart grow fonder” didn’t seem to work with me. And now, here I was, once again in the family fold for one of the two types of events that brought me back now and again: marriages and funerals.

I have absolutely no recollection of what had happened after Dad’s funeral. I mean, I don’t recall there being a tea or wake but I’m sure there was. I just don’t remember. What I do recall are little incidents that have remained with me like faded snapshots: the choir soloist who sounded like she was singing at her own funeral, the altar boy with a freckled nose, and Uncle George reaching out and touching Dad’s coffin as it was carried up the aisle after the service. The last thing that stuck with me was the sound of damp earth hitting the coffin as we threw handfuls down into that miserable black hole. It was all so final.

Now we were doing it all over again. Dad had waited 29 years for his wife and here she was at last, joining him for eternity. Unlike Dad’s departure, Mum’s was going to be quite unforgettable. The reception, tea, wake – whatever it’s called – was held at the church hall, hardly any surprise there, and turned out to be quite a jolly affair. Auntie Gertrude, who at 89 was mum’s younger sister by seven years, got stuck into the sherry and became quite vocal as the afternoon wore on. I tried to do the chicken mayo sandwiches justice but just didn’t have the heart for it. Brother Sean, the black sheep of the family, was not so reticent and demolished huge stacks of them, along with countless sausage rolls, all washed down with copious pints of bitter – no surprises there, either!

Gradually things wound down and people started taking their leave in ones and twos. Distant cousins and great nephews and nieces twice removed and their siblings and children came to offer their condolences once again and excuse themselves from the proceedings. Polly drew me to one side and said she needed to get some fresh air and would I care to take a stroll along the church walk under the pergola with her? The rain had eased and a watery sun was filtering through the clouds, so I agreed to escape the hall and accompany her.

“I wanted to ask you about Mum’s stuff,” she began as we walked beneath the climbing roses covering the pergola. “There are boxes full of papers and what-not that we found in the attic. I think there are things even she didn’t know were there.”

“Well, if it’s that old, it can’t be very important,” I reasoned. “I assume you got the will – oh my God – she did leave a will, didn’t she?” I suddenly had visions of her having died intestate and leaving a mess for someone else (namely us) to clean up. “Oh, yes, don’t worry,” Polly said. “She left everything to be divided up equally between the four of us.” “Well,” I replied. “I’m telling you now, I don’t want anything. You guys have looked after her all these years and I know it’s been a big commitment, not to mention the financial side of things. I know you all chipped in and installed central heating for her some years ago and things like that. I’ve just sat on my backside in Australia and not had to do anything, so I reckon it’s only fair that whatever she’s left should be split between the three of you here who have had the responsibility of making sure she was comfortable in her final years.” “Don’t be silly, she wanted it split equally between all of us,” said Polly. “Anyway, we can sort that out later but I’ve had a quick look through the stuff from the attic and I think you’d be interested in some of it, seeing as you’re into researching family history.”

This spiked my interest right away. Of course! There could be a treasure trove of information hidden away among Mum’s forgotten memorabilia, little gems that might explain many things I’d thought of as ‘loose ends’ – questions that needed answers, faces that needed names and names that were missing faces. Dates that didn’t feel quite right, relatives who just seemed to disappear without explanation. There were so many things I had wanted to talk to Mum about, ask her about, when she still had her marbles. Not that she wasn’t ‘with it’ to the very end, she was. She’d escaped the ravages of Alzheimer’s, but at 96 you had to make some allowances for a certain vagueness of demeanour and a faltering memory.

“There’s a biscuit tin from Christmas 1952 chock full of old photos,” said Polly. Then, almost casually, with a sideways glance, “There’s a diary too.” “What!” I exclaimed. “Ha, I thought that would get you going,” said Polly. “I don’t believe it – Mum wasn’t the diary type,” I said. “My thoughts exactly,” said Polly, “but it’s there. I only glanced at it as I’ve been flat out organising things and have had to be very strict with allocating my time.” “What dates are we talking about?” I asked – with all sorts of ideas racing through my head. “I think she started it in her teens, when she was courting Dad, so that was the late 1930s,” said Polly.

I could hardly contain my excitement. Was this little book going to be my window into my past? Was it going to tell me all those things, those secret things that my mother never told me?

Well, do you want to know what I found? Stay tuned for part two… Coming soon!

Have any secrets come to light in your family after a funeral?