‘I mightn’t own it, but my retirement community home is a piece of paradise’ 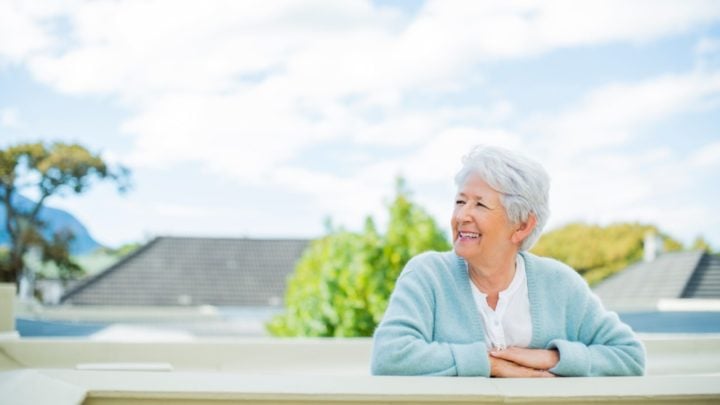 Living in a retirement community might not be everyone's dream, but it certainly has its advantages. (Image posed by model) Source: Getty Images

It was marketed as a ‘relocatable home park’. There were two sections — an owner’s section and a renter’s section. My sister and her husband had bought into the owner’s section, after selling their previous home and going on an overseas trip. Did I want to live there, on the other side of the city, away from my close friends? No! But I was ill, had to resign from my job, and, with no income, couldn’t afford to renew the lease on my present two-bedroom unit, only 5 kilometres from the city.

My sister and her husband allowed me to stay with them until a rental property became available. Two weeks later, a one-bedroom, relocatable home became was up for rent. The previous occupant had left it in some disrepair so it had been repainted and recarpeted, but it was so small. A tiny front garden bed, a lounge/kitchen, a bedroom and a bathroom/laundry and a carport. Given my financial situation at the time, the alternative was a tent in someone’s backyard, so I moved in. Much of my furniture had to be stored under my son’s house, but what I could fit in, I did.

At that time, the owner of the entire complex was more interested in receiving his rents than choosing the calibre of tenants that occupied the ‘renter’s section’ so there were some dubious personalities occupying varying styles of accommodation — caravan/annexe styles with no bathroom or laundry facilities, so those people had to use the amenities blocks (one of which was located at the back of my carport). I saw as many police cars as ambulances passing my front window. However, as the months went by, I had made my little abode comfortable and aesthetically pleasing. I minded my own business, kept myself to myself and just focused on getting better.

More than two years ago, a registered stock exchange company bought the entire ‘complex’ (for the sum of $25 million) and since much has changed. Repairs are no longer done ‘on the cheap’ (I have a new stove and gas unit); as time has progressed the unattractive caravan/annexe homes have been replaced with brand new, well-appointed relocatable homes; grassed community areas have been developed and I’m content.

The complex is not your ‘upmarket’ style. You know, the ones you spend more than $300,000 to buy into with medical centres, recreation areas etc. In the ‘Renter’s Village’ I am not allowed to have a dog or a cat but I have ‘Simpson’, my orange canary who provides with me an explanation (should anyone ask) that I’m not talking to myself. My neighbours are pleasant but not ‘invasive’. We just do our own thing knowing that, if we need help, we can call on each other. I look out from my desk at the front window and see a blue sky, palm trees and with some attention, my little front garden bed is prolific with bromeliads, ferns, and some dwarf sunflowers and marigolds, potted azaleas and various other shrub type plants — all of which are responding to my care and attention.

It’s my little piece of paradise. It’s my ‘home’. I may not own it, but that doesn’t matter. I have a comfortable roof over my head, food in the fridge, my own comfy bed and my electric recliner! My carport doesn’t house a car (I can’t afford one) but it has a raised garden bed full of herbs and flowers, potted plants, my dining setting (that wouldn’t fit inside) and fairy lights are strewn under the carport roof.

Do I miss my charming old ‘Queenslander’ with its beautiful huge verandah, polished floors and high ceilings … Yes, of course I do! Yet, I lost that a long time ago. Now, I go out for my daily ‘airing’ on Boris (aka my mobility scooter); say ‘hello’ to people I don’t even know (but they always say ‘hello’ back) and live in — for the most part — an ‘over-50s’ retirement community.

Have you moved into a retirement community or over-50s lifestyle village? Is this something you’re considering for the future?