‘Our empathy is evident for those affected by bushfires, so why not for refugees?’ 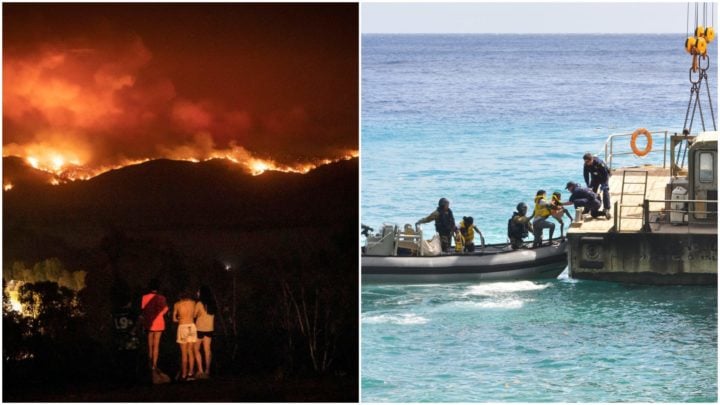 This community writer says the empathy towards Australians who have 'lost everything' in the bush fires has been overwhelming, but the same does not extend to refugees coming to Australia with nothing hoping for a better life. Source: Getty Images

Much was made of the prime minister Scott Morrison’s personal responses to the bush fire threat in Australia. The man who gave us the expression ‘unfunded empathy’ was now walking through the disaster zone facing the not-so-quiet Australians. As I watched the media coverage of the interactions between the prime minister and the victims, I considered the recurring word in the news reports — empathy.

It looked bad when he walked away from a pregnant woman who had lost everything and declined his handshake. Much of the populace was disappointed in Morrison’s behaviour toward this woman but a certain male broadcaster labelled her ‘feral’ without knowing her or anything about her circumstances. The broadcaster applied the disdainful label because of her appearance. His lack of empathy allowed him to dismiss her as unworthy. As an Australian made homeless by the bushfires in Cobargo, a town wiped off the map, and left with nothing but the clothes she stood up in, was she unworthy?

Images of families huddling on beaches to escape impending doom. Navy boats rescuing people from beaches to transport them to safety, a 20-hour voyage away. Reporters gave descriptions of “the sky raining down fire”, of a “red glowing sky” and then a “blackened sky”. The wail of sirens, the terrifying roar of the approaching fire, rushing vehicles, impenetrable smoke and the unforgettable sound of dying animals. Communities faced closed highways and compromised water.

Victims interviewed spoke of having nothing — only the clothes they stood in — having lost everything, their homes, their cars, their businesses, their farms, their crops and their animals and in some even more tragic circumstances their family members.

In true blue Aussie spirit, we rallied as a nation to the cause. Comedian Celeste Barber raised $50 million online, former cricketer Shane Warne auctioned off his baggy green for $1 million and a bunch of primary school girls raised $2,000 with a cupcake and lemonade stand on Manly Beach in New South Wales. For my own part, I have donated twice and plan to recommend to our local club that we donate and hold a community fundraiser to support the bush fire recovery effort.

We can all relate to the suffering of these bush fire victims. My extended family has seven families affected by the ongoing threat. They all share experiences of evacuation, sirens, helicopters water bombing near their homes. Some have been forced to seek refuge in community centres. Sadly, one had been on holiday in Queensland only to be sent photos proving that his home was burnt to the ground. He no longer has possessions, no car and no pets they were all destroyed in the fire. He can’t quite comprehend what has happened. Recovering from cancer treatment and taking a welcome holiday to the Gold Coast only to find himself stranded there because ‘home’ is not accessible and in reality, his no longer exists. He can’t quite absorb it until he sees it with his own eyes. Can you imagine being told your home was gone and the carry-on bag you took on the plane now represents your entire worldly possessions?

It is so sad and tragic — the loss of life, property, infrastructure and wildlife. We can all empathise with this type of loss, it has been on our screens for months. As Aussies, we have lived with the threat of bush fires but this season has seen unprecedented fire damage. All Australians have ritually enjoyed those long languid family summer holidays in beach-side towns.

Will the children evacuated by navy ship ever be able to forget the trauma they experienced in towns like Batemans Bay or Mallacoota? There was something deeply disturbing in seeing women with preschool children and the elderly being left on a beach as the last ones evacuated from the bush fire threat due to the physical limitations of HMAS Coutts.

As we watched these poor people brought to shore by the navy, sick, bedraggled, hungry and brown-faced I wondered why our empathy for these people escaping horror could not be extended to refugees from war-torn countries? Refugees are just people seeking safety and they too have nothing.

Can Australians find it in their hearts to empathise? Do we afford empathy to all human beings or only those like us? Does it make us a better nation to treat all people humanely in the face of such obvious human suffering? When we watch people stranded on a beach do we ever consider the suffering of the people in our government sponsored detention centres?

Do you think Australia is losing it's empathy?