‘Oh, just get her dropped and let’s get to the pub’ 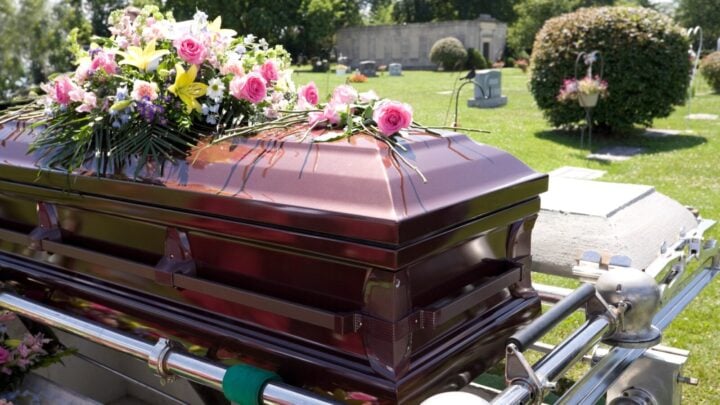 No minister, no mourners. Not even the woman's husband grieved her death. Source: Getty Images

Cytax was the name of the now long gone company that I once worked for. I think the ‘tax’ in the title referred to the fact that the company had, among other activities, once run a fleet of Taxicabs. They had also once been active in funeral directing. By the time I joined the company the cabs had all gone and the main activity was a couple of used car outlets plus a large new car franchise selling General Motors products. However, the funeral directing side of the business was still active albeit in a very small way. The member of staff who was still involved in this activity was named Phil, a colourful character, in more ways than one.

Phil was a short older guy of very ruddy complexion and ginger hair, with a nose the colour of which could have rivalled the famous reindeer. He always seemed to be smoking a pipe. This device constantly emitted sparks, which he tamped down with a forefinger. In those days I think pipe smokers developed asbestos tipped fingers that they put to good use. He was an avid cricket fan and served as the chairman of the local town cricket club.

We occasionally had mainly older people turn up in the office asking to see the person who handled funerals, namely Phil. One such visit made a marked impression on memory. This day a quiet little North Country chap came in; he was directed to Phil and then forgotten about.

A week or so later Phil wandered into the office late one afternoon, his face even more flushed than usual, obviously a bit worse for wear, refreshment wise. The pipe was roaring away and throwing more sparks than Puffing Billy breasting a rise. He dropped into a chair, a Cheshire cat grin on his face, waiting for our expected questions.

He didn’t have long to wait – curiosity swiftly got the better of us, given his look of desperately wanting to tell a story.

“Do you remember the little bloke who came in last week?” he asked. We replied that yes we thought so.

“Well,” he said, “I’ve just buried his wife”; but the look on Phil’s face wasn’t one of sadness or sympathy.

The story told was that the man had come in to arrange a funeral, so Phil gave the expected words of sympathy and offered his services. He then asked questions as to the required services for the sad event.

How many cars did the man think would be needed to transport all the mourners? The reply was that no cars would be required. Phil told us that he had learned to be understanding when dealing with the bereaved so thought that either the people attending would have their own cars or maybe the widower was short of funds and couldn’t afford to provide transport. Then the man surprised him by asking if he himself could ride in the hearse with Phil and the driver.

This was an unusual request, but Phil was skilled in handling oddities and again acceded to the man’s suggestion. He told us that he had thought maybe the guy wanted to take the last journey in company with the dearly departed.

On the assigned day, Phil, the driver and the bereaved all arrived at the cemetery in company. As the coffin was unloaded by the local workers and placed alongside the grave, Phil asked when would the mourners be coming. The guy shook his head. Perplexed, but feeling for this lonely little man Phil asked, “What about the minister?”

“There’s no minister,” retorted the guy.

Gathering all his professional skills Phil asked, “Well, do you want me to say a few words over the grave?”

“Oh, just get ‘er dropped and let’s just get t’pub,” responded the guy.

Phil and his new friend then spent a fair while in the local, hence Phil’s flushed appearance after his return to the office. Seems the little guy had been given hell, over a very long time by his lady wife. “Only good times I ‘ad,” he told Phil, “were when t’war were on ‘an I was in’t army – bloody Germans ‘ad nowt on ‘er – Tiger Tanks ‘an all.”

Phil finished his story with huge grin on face. We all sat wide-eyed in awe before we joined in his merriment.