‘What’s all the fuss? I can’t comprehend why golliwogs are so offensive’ 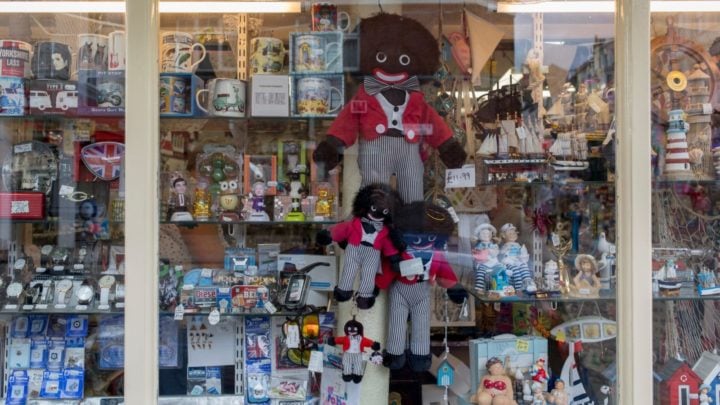 Jennifer makes and sells golliwog dolls, like the ones in this shop window, and says they are much loved children's toys. Source: Getty Images

Love them or leave them, Golliwogs are here to stay. I know many people feel these children’s dolls are racist, but I personally don’t feel that way.

I don’t feel there’s anything racist about golliwogs. I’ve always found them to be cute little creatures bearing no resemblance at all to any human. I honestly feel they are cute little dolls!

They have been around for many years and I had one when I was a small child. I loved it. I also loved Gilbert Golly from the Noddy Books. Another favourite book was The Three Golliwogs.

It’s beyond my comprehension why people get up in arms about them. How is it that people find these cuties so offensive?

My family is made up of indigenous and non-European people, as is my circle of friends. When I’ve spoken with them about golliwog dolls, none have said they found them offensive and they don’t feel making the dolls or owning one is racist.

I often wonder if such folks feel that Barbie dolls are offensive. If not, why not? Barbie has been for years representing women in unrealistic and sexist ways, what with her big breasts, slender waist and blonde hair. But as a big-busted and blonde woman myself, I’m not offended.

What about Cabbage Patch Dolls? Unlike gollies, these dolls are designed to look human in appearance. In my opinion they would be more likely considered ‘racist’ than the humble golly doll, but I’ve never heard anyone complain about them!

I make golly dolls. I sew them and have sold them to people all over the world. The people who purchase these dolls from me love them just as they would another doll. When I listed the dolls online recently there were more than 100 comments on my work. Only two people claimed I was a racist by making them.

I recently started thinking that maybe people are more offended by the word ‘golliwog’ than they are the doll. I wonder if by calling them something different people would see past the claims of racism?