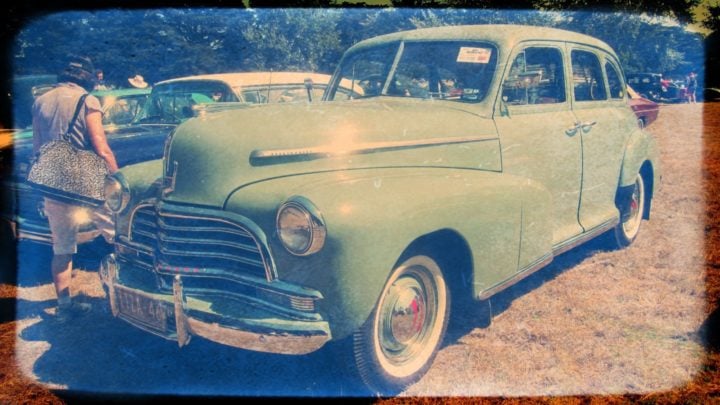 Barbara learned to drive in a 1946 Chevy Fleetmaster, like this one. Source: Sicnag/Commons Wikimedia

I learned to drive when I was 13 in a 1946 Chevrolet with column gears. It was battleship grey with one shiny mudguard because my mother hit the front gates regularly. There was only an inch or so on either side of the driveway so it was understandable.

Mum learned to drive a 1922 Essex. In 1930 she backed into a horse and cart and the shafts poked through the fabric so that the horse’s head appeared above the back seat. I wish I’d seen that.

I just loved driving. Dad and I would go to the free tip with some rubbish, and as soon as we were off the road and into the tip with its dirt roads he allowed me to take the wheel, which I could only see through and not over. It took tippy toes to reach the clutch. I remember the excitement of those times. The very best.

My sister and I used to dream about going in the Redex trial, which was a race around Australia, so we’d practise going from first to third gear in case we ever needed it. That poor old Chev used up as much oil as petrol and I swear it automatically nosed into every service station.

Redex trial always looked so exciting and dangerous. The prize was 2,000 pounds and many teams were sponsored. In 1955 only half the cars made it and in 1956 the trial was abandoned.

I recently bought a new car and no one offered to show me the engine at all. I know a bloke who demands that the car he buys be put up on a hoist so he can examine it minutely.

Me? I wanted to know if it had holders for the coffee and wondered if the dog would like it. I wanted a safe, white car with four wheels.

This one had heated seats (which I turned on by accident and thought ‘my goodness, even in old age I am hot stuff’), electronic windows, reversing cameras pointed backwards and sidewards, plus heating and cooling with a different temperature for the driver and the passenger, and fancy Wi-Fi along with mapping stuff. If I have the bluetooth off on your smartphone this car sucks everything up and uses its own mapping system, which doesn’t seem as good to me as the very tiny lady in my phone.

She tells me exactly where to go and adjusts directions if I manage to stuff it up somehow. I don’t need to see the map. Listening is enough.

Not long ago when I was driving to a completely unknown suburb my tiny navigator said, “Turn right”, but it was impossible and I found myself back on the freeway.

“Take the first exit,” she requested. She found another route and got me there in time for the party.

At my new car’s first appointment with the mechanics they said I could have a ‘chat’.

“How about showing me where to put water and oil?” I asked.

They did, but seemed surprised I’d asked. I suppose you just drive it till I tells you to stop and visit a mechanic.

Headlights? This car knows when it’s dark and it politely leaves the cabin light on at night till I’ve gathered my belongings and made it outside the car and locked it.

Rain? It puts on its wipers.

If I don’t keep exactly in the lanes, it gives a plaintive ‘beep’.

It’s impossible to lock the keys in since it complains till you realise you’ve left the keys in the car. I massage the door handle and it locks. The keys remain sulking in your bag.

I’ve never liked locking cars. It’s always been such a hassle coming back with armloads of shopping and then having to find the keys, so my old car, which had been squashed by an unlicensed thug, was rarely locked.

I had my business website advertised on the side and thought it was highly visible and no one would be dopey enough to steal it. A car with ‘Songs4Children’ is not what a young thug wants to drive.

I was stationary, sitting at lights when his truck smashed my car. Me with whiplash and nice old car written off. Police were involved and I wonder whatever happened to him. He told me he had a business to run and this was so inconvenient! Never mind that I had to buy another car and grieve for my squashed one.

I don’t have to explain to passengers how to open the windows in my new car, which is something I did in my old car. I don’t have to lean over to do it, it’s just a touch and they go neatly up and down.

This car is really something. I could be in love.

Do you remember learning to drive? Who taught you?