‘Great events of the Royal year and the conquest of Everest’ 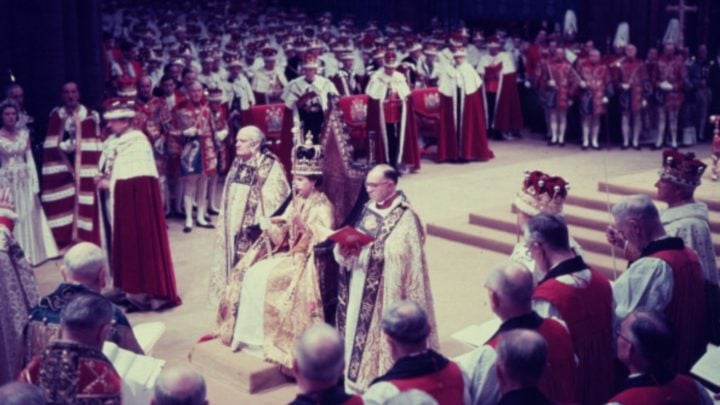 People forget how loyal we Australians were. And when I say ‘loyal’, it was understood, intuitively, that the word meant you believed in the Royal Family, Empire Day, the Union Jack, all those symbols and institutions whose time, frankly, had been well and truly on the wane since about 1890.

Yet we believed passionately that it was Britain that had won World War II, certainly not gum-chewing, jitter-bugging cowboys from North America or, God forbid, lugubrious, vodka-swilling peasants from the Russian steppes.

It was hardly surprising that the biggest public event of my early childhood was the coronation of Elizabeth ll on June 2, 1953. So big was this event in our imaginations, that a special book was later produced entitled Great Events of the Royal Year, which my family dutifully acquired. For those few who still harboured any (reprehensible) doubts, this slender volume reassured you that London was still the capital of the world.

I don’t remember much that was in it, except for the one towering (pardon the pun) truth about Britain’s (and by extension, our) place in the world, when it was revealed that news of the ascent of Everest by Edmund Hillary and Tenzing Norgay on May 29, reached London on Coronation Day itself, surely a talisman of an empire on which the sun would never set.

Why this, of all the ‘great events’ of the Royal Year should stay with me is no mystery for I have written elsewhere about the obsessive attention given earlier by my Sunday school teacher to the failed British expedition to the Himalayas of 1924 when George Mallory and Andrew Irvine disappeared on the North Face of Everest just short of the summit.

Hillary and Tenzing never revealed which of them first set foot on the summit in 1953, but they did say that after the necessary photographic evidence had been taken, they had looked vainly for any signs that Mallory and Irvine had preceded them 29 years before.

The disappearance of those two British climbers was the sort of ripping yarn that our childhoods were built on. I can still remember that breathy lesson at Sunday school, about how one of their expedition colleagues, geologist Noel Odell, watched “two black dots” going “strong for the summit” at about 12:50pm (perilously cutting it fine) on June 8. Until a misty cloud enveloped the crest, with those two black dots never to be seen again.

This was a mystery certain to thrill any romantic in an era in which great blobs of red and pink highlighted the map on every schoolroom wall. And it was a mystery that titillated many more in the decades that followed: Did they or didn’t they?

In 1933, another failed British expedition found Irvine’s ice-axe lying on a rock slab further down the flank of the mountain than where they had last been seen by Odell, prompting the critical question, had it been left there on the ascent or the descent?

And then came the case of ‘the English dead’. In May 1975, Chinese climber Wang Hong-bao stumbled across an ‘English’ (gleaned from his period dress) climber frozen into a cranny on the scree slope of the North Face. As the North Face had been closed to Western climbers by Beijing from 1950 and no one had died there during the 1930s, the only conclusion was that the corpse was either Mallory or Irvine.

But before anyone could get a confirming fix on the story, Wang Hong-bao also lost his life on the mountain. And the mystery seemingly remained unresolved. Until 1999, that is, when the Mallory and Irvine Research Expedition set about trying to settle the 75-year-old controversy once and for all.

On May 1, members of that expedition found a body, by chance, on the 45-degree slope, just above a precipitous drop-off into the Rongbuk Glacier below. Its skin was a bleached alabaster white, whiter than any surrounding rock, whiter than any snow pocket, lying face down with head and upper torso frozen into the mountainside. The right leg was broken and the right elbow dislocated, while severed climbing rope was tangled around the midriff.

George Mallory was a god to the world’s climbing fraternity, or at least a John the Baptist, while Andrew Irvine was a 22-year-old neophyte better known for his technical skills with oxygen tanks than for his experience in climbing. So, if there had been a fatal fall, the searchers reckoned, this must be the body of Andrew Irvine.

When they loosened his clothing, however, they found a laundry tag on the shirt collar identifying the owner as ‘G. Mallory’. One searcher asked the others, why would Irvine be wearing Mallory’s shirt? Until other items of clothing revealed the same name tag of ownership. It was unbelievable: the great George Mallory himself, reduced to a human dimension.

But did he reach the summit after the cloud obscured Noel Odell’s view? The small camera he took with him to record the event was not there, so either it broke loose in the fall or it was in the possession of Irvine instead. But what was still there on Mallory’s body were numerous sad necessities to make life at 28,000 feet a little more bearable — among them, meat lozenges for energy, matches, scissors, a safety pin and letters from home.

What was not on his person, tellingly, were the letters from his wife, Ruth, to whom he was deeply attached, and her photograph which it was his intention to leave on the top of the world should he have summited that day in June 1924. So, did he summit? Without the camera, we will always be at a loss to know. For, the harsh, ever-changing environment would have conspired to propel the body of ‘the English dead’ over the mountain lip onto the glacier thousands of feet below.

The photographic ‘proof’ might have gone west with Irvine’s body but, with the romantic schoolboy still alive in me, I prefer to believe that George Mallory did leave his wife’s sacred memento on the roof of the world and, in scrambling back down just ahead of a night’s exposure in the ‘death zone’, took one risk too many.

If only they had taken the word of a starry-eyed eight-year-old, perhaps a different Great Event of the Royal Year might have been held in Coronation Week — a special remembrance service at Westminster Abbey on June 8, 1953 to give thanks for the life and deeds of another noble son of empire. How very pukka that would have been.

Is there an event from when you were growing up that is cemented in your memory?