‘Light up the dark! Why we need more fairy finery at funerals’ 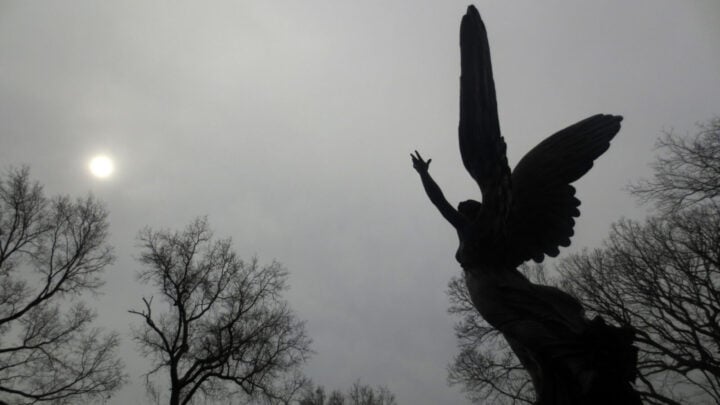 There was a fairy at Jim’s funeral. This was last year, before Covid-19. The small funeral chapel was filled to the brim with people, mainly in sombre colours. As I glanced across to see who had turned up, I noticed that the swimming crowd was well represented, plus his family and grandkids and neighbours of course. But among all the soberly dressed people there was a fairy, complete with wings and a wand. Amazing.

I could hardly concentrate on the service. Afterwards I asked Jim’s son, “Hey, what gives with the fairy?’ He said come over and meet her. It turned out she was a friend of his son’s and thus had visited Jim sometimes. I had wondered how she had fitted into Jim’s life, as I’d never seen him talking with a fairy. I’d known Jim and his wife for years. I’d lived next door to them for one year. Sadly his wife had died a few years previously. They seemed to enjoy a love-hate relationship, and my dog so loved visiting them and their dog.

Jim was a hot shot in the swimming scene down at Shelly Pool and organised nights out and photos for the wall in the shed we used. You checked in the shed for lost caps or goggles or the temperature of the pool and any interesting events planned. If anyone in the group turned 80, Jim organised an “OBE” certificate saying, Over Bloody Eighty. Jim called Shelly Pool “Doctor Shelly” and said a dip every day would keep us healthy. That worked for him for many years, but he’d recently become old somehow, and his family had moved him to a nursing home quite some distance away.

I only knew about 20 years of Jim’s life and certainly wasn’t familiar with the 70 years or more that went before. It’s strange how you only learn about all the earlier years in someone’s life when you’re at their funeral. With the Covid-19 limits on funerals, there’s so much we’ll never know about our friends who passed away in 2020. The result of all this is that I’ve started asking new acquaintances what they did in a previous life – so as not to be surprised if I’m ever at their funeral. Mind you, they all seem much younger than me, so they may well be coming to mine instead! But – note to loved ones – I hate those photos showing the deterioration over the years. I could do without that. A good party would be better.

Back to the fairy. Don’t believe that old song, ‘Nobody loves a fairy when she’s 40’. Not true. Lots of people love this fairy, who looked well over 40 – but so what! Most of us are! I found out this fairy was never out of character. Once a fairy, always a fairy. Imagine leaping out of bed each morning and working out which fairy outfit you’d wear and which wings would go well. Not to mention the wand. Matching? Or not! This fairy has an Order of Australia medal and spends her time visiting sick kids in hospitals and cheering them up. What joy she brings. If I were in hospital and needed cheering up, she would be just the thing. I was so happy to talk to her and learn about her occupation. When we’d finished chatting she gave me a tiny phial of fairy dust, in case I ever needed it. I’ve kept it in the car within easy reach. The way the world is now, we all need it!

Have you met any interesting characters at funerals?