A heart attack is no laughing matter 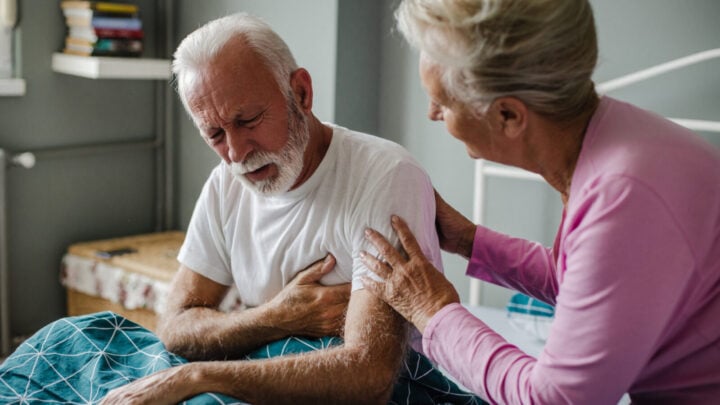 His ‘sore throat’, which the GP earlier that week had suggested a follow-up appointment with an ENT specialist, turned out to be an unusual warning sign for a massive heart attack. Source: Getty

Although there was some comedic value when my partner complained to the doctor “I’ve been here in the hospital for 24 hours and no one has looked at my throat yet”, to which the Dr replied, “that’s because I’m a cardiologist and you’ve had a heart attack”.

His ‘sore throat’, which the GP earlier that week had suggested a follow-up appointment with an ENT specialist, turned out to be an unusual warning sign for a massive heart attack

I suppose in the USA, this could trigger some sort of lawsuit against the GP, but, if someone looks otherwise healthy and is complaining of a painful throat, I guess a constricted heart artery doesn’t spring to mind.

For the record, normal indications can include chest and arm pain, breathlessness, and faintness, but neck (throat) and even jaw pain can also be related symptoms of an imminent attack.

Having established that the ENT specialist was no longer needed, the cardiologist organised explorative surgery for the following morning.

I overheard a discussion he was having on the phone, explaining to someone clearly demanding his time, that he was covering three different hospitals and currently had 10 patients requiring immediate attention.

How he kept that workload up and under the constant pressure of saving people’s lives seems something of a marvel.  But also, a clear sign we need to train more cardiologists. The Heart Foundation reports that currently, 18 people die every day in Australia from heart attacks.

He had been lucky (as far as these things go) and didn’t need bypass surgery as it hadn’t been the main LAD artery that was blocked, otherwise cheerfully known as the widow maker…

However, a new battle was about to begin.

To this day, he has not fully read his discharge papers and when I was explaining what he shouldn’t be doing in the first fortnight after release from the hospital, he frequently asked me why are you reading from the heart attack patient’s notes when I had a stent put in?

This is a highly intelligent man who was understandably somewhat in denial at first. It was very hard for him to come to terms that seemingly, out of the blue, he’d had a heart attack.

“How did this happen?,” he asked the cardiologist. “Because you’re 70 and live in the Western world and all that infers,” was the reply.

It is remarkably hard though not to carry anything over 2kgs during that first week.

We had another little scare, in the first couple of days at home, after he had a hot bath to get the ‘sticky’ bits off from where the wires had been fixed. He then climbed up the stairs to our bedroom and promptly fainted on the bed with his eyes rolling back in his head.

The notes (he refused to read) said NOT to have a hot bath followed by exertion in any way during the first few days.  I really thought I’d lost him that time. But luckily the moment passed, and the paramedics said his stats were fine.

Due to a lifetime of keeping fit, with a reasonably good lifestyle and the benefit of an NSTEMI (partial not fully blocked artery) not STEMI attack, his heart recovered in good shape.

Not to tempt fate, I’ve invested in some ‘heart healthy’ cookbooks and follow the guidelines of a Mediterranean diet high in fish, poultry, legumes, fruit, and veggies. Lean meat but not too much, and good fats (avocado, nuts, olive oil) and less of the artery-clogging trans fats in processed foods.

Our only sacrifice really is the salami, high-fat cheeses that we love, and our local bakery sausage rolls – now kept for special occasions. Many processed foods are now off-limits. Unsurprisingly, it turns out the less we tamper with nature, the better our bodies like it.

We were lucky. It happened at home and I could drive him to our excellent local hospital only 20 minutes away at 4 am on a Sunday morning, and we didn’t have to wait for an overstretched ambulance service.

It’s so important to keep an eye on our health regularly. To eat our fruit and veg, keep moving often, have our check-ups (Covid dramatically increased the number of missed heart health checks), and look out for early warning signs.

And if things don’t feel ‘right’, get checked out ASAP. Effective management of high blood pressure and cholesterol can make all the difference.

With sage advice from a friend who knew of others in this situation, I’ve cut back on my ‘useful’ advice and am simply grateful he’s still around to ignore a lot of my ‘helpful’ suggestions.

Because no one wants to be made to feel more vulnerable and older than need be.

I’m also trying hard to follow my own recommendations, as apparently women are more likely to die from a first heart attack than men.

Of course, it’s changed how we look at the world (let’s not dwell on the increased travel insurance premiums!), but we’re determined to make those changes positive and keep a cheerful attitude while embracing life to the full, for as long as we possibly can!