Dealing with insomnia without divorcing your snoring prone partner 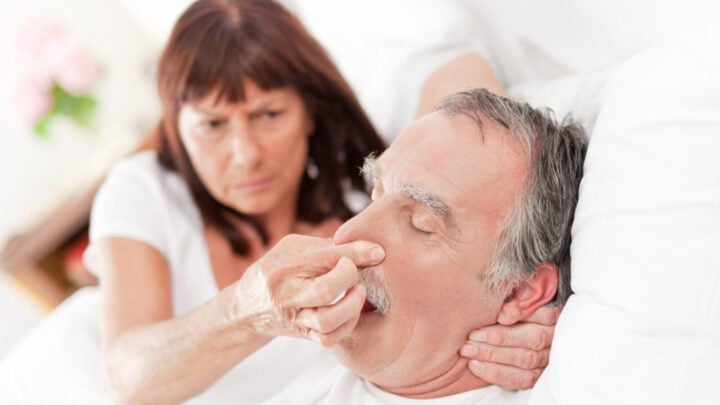 This blogger gives her tips on dealing with lack of sleep. Source: Getty

A lot of wise words have been written on this site about insomnia and its health implications.

Many of these have concerned me so much that I now lie awake worrying about lying awake!

My lived experience tells me this – that with age comes (for me) a distinct difficulty sleeping for any length of time in one go.

I thankfully learned some useful facts at a lecture I attended on sleep matters (as in all about sleep… I already knew that sleep matters!).

It is indeed good to have around seven hours of sleep per night. But it does not have to be all in one hit.

This is a relief as I only ever make it to seven hours in one go with some sort of over-the-counter sleeping remedy. Otherwise, I wake up every two to four hours followed by a period of wakefulness.

The sleep lecturer (therapist) suggested that once awake for more than a few minutes it was best to get up and change rooms rather than lie there fretting. This is because it could be a full two hours for the nightly sleep cycle to kick in before you nod off again.

This always feels counterintuitive to me as you are surely teaching your body to get up at this time of night. I am sure there are very good reasons why it is advised though.

But, for me personally, it’s impractical as:

a) I’m likely to wake my partner and disturb his sleep too, and;

b) a far worse situation… I am likely to wake the pair of cloth-eared dogs who sleep downstairs but with one ear open for the slightest sound that a human is awake upstairs and potentially going to provide company for them.

And the 11-month-old puppy needs no encouragement to go into full-on play mode at the first sign of my tired footsteps heading down to get a cup of tea while attempting some peaceful time out of the bedroom.

So, I have developed the illegal habit (according to the rules of proper sleep hygiene) of putting on my over-ear noise canceling earphones and listening to music, podcasts, audible books, and ambient sounds via my mobile phone when I cannot sleep.

It absolutely wins out over lying there listening to my husband snore while I stare up at the ceiling, dreaming of suffocating him.

I’m pretty much up on world news events by the morning but also pretty much lacking in enough sleep. This often eventuates in bags the size of suitcases under my eyes to face the day.

I know that I sleep best when I exercise for at least an hour during the day and don’t eat close to bedtime. Stop caffeine by 4pm and read a book rather than watch television/phone in bed.

And I know I would sleep better without loud snoring going on in the immediate vicinity.  But short of divorce and moving to a bigger home, that is not an option.

On the plus side, the partner is also an insomniac, so we often have quite enjoyable conversations during the night. Often accompanied by herbal tea because he is a gamer, to face the enthusiasm of the dogs than I am at 4am.

It is also a good time to gather your thoughts.  We live about 1km from the ocean up a steep hill, and some nights I can hear the waves rolling in from the distance.  That’s the best way of getting back to sleep and for some reason, better than the apps that offer the equivalent sounds.

Although, I am also a fan of listening to rain or beach waves on an app, and they surprisingly do not increase the frequency of trips to the bathroom.

The particular sleep therapist I mentioned earlier told us a little story that stuck in my mind (something of an anomaly these days).

‘Think of sleep like a train.  When the feeling of sleepiness rolls into the station of your mind, immediately or as soon as you can, get into bed with all the lights and noise off and catch that train!  And remember, if you wake up and can’t get back to sleep immediately that another sleepy train will be along to catch within two hours…).

So, there is a very good chance that you won’t be lying awake all night.  Although it may feel that way sometimes.

Another skill that over 60s seem to develop (for those of us who work part-time or are retired) is the particular benefit of the nap.

I have become a super-efficient champion of the nano nap.  And I’m pleasantly surprised at how a little 15–20-minute power nap early afternoon can energize me for the things that need to be completed before heading off to another night of adventures with my insomnia.

I’ve also found that 4.30am in the morning is a pretty good time for making lists, writing my (when will it ever be finished) novel, and planning the day ahead.

So, all in all, we have to take the good with the bad.

But I must admit when I wake up and look at the clock and it is 6am rather than the middle of the night, THAT is a wonderful night’s sleep and I’m very happy and grateful for it!

"I know I would sleep better without loud snoring going on in the immediate vicinity.  But short of divorce and moving to a bigger home, that is not an option."