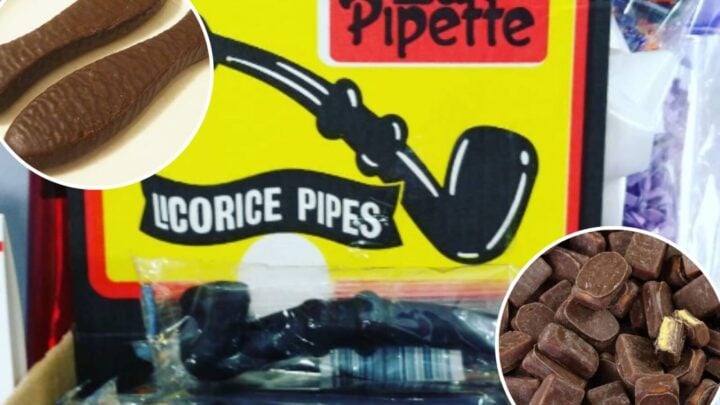 Oh, the lollies and sweets of yesteryear. No wonder I have such bad teeth. But oh, how I loved them – even though they were treats that were hard to come by. We would trek on down to the dairy (corner shop) with a few pennies to slowly choose sweets from big jars on the counter. You would get a big white paper bag full for threepence. Living in New Zealand, chocolate fish were a ‘thing’. They were delicious. Soft, fluffy, pink marshmallow was covered in gorgeous dark chocolate. It tasted of strawberries. And pineapple lumps. Little rectangles of chewy, yellow nougat covered in dark chocolate. They made my mouth water. As a big grown-up, I found some and they tasted a lot different – chemical and artificial. Not nice at all.

And then there was the liquorice. We could buy it in strips, or in rolls. It was delicious and so easy to gobble up quickly. We could buy a liquorice pipe, and sit there pretending we were our granddads with pipes in our mouths. And the ‘fag’ lollies – little white cylinders in a cardboard box with glowing red tips. We would sit there and ‘fag’ away – the closest we would ever come at a young age to a real cigarette – unless we pinched one and choked and coughed behind the bike sheds at school. Gobstoppers were a favourite because they lasted so long. Mum liked them as they kept us quiet for a fair while, although, I would often take mine out to examine the changing colours in all the layers.

Then there were marshmallow ‘eskimos’ – pastel-coloured little men in a packet. I felt a bit like a cannibal eating them. Jaffas were a treat at the movies – too yummy to waste rolling down the aisle like some of the show-off older kids. Snifters were mint and chocolate and were good at removing your fillings. And smokers – smokers were tiny pink lollies that tasted like musk. Mum had them for when we coughed in church. There were also lolly coins with numbers printed on them.

Oh, and the chocolate. A ‘sante’ bar was a small dark or milk chocolate bar which was delicious and very popular. Ice cream was also very popular. I loved hokey pokey which was honeycomb chunks in vanilla ice cream. An eskimo pie was a small ice cream rectangle covered in dark chocolate. You could also buy ice cream slabs in pink wafers. My favourite was the ‘Joy bar’ – a long rectangle of vanilla ice cream with a raspberry jelly thread running through it, covered in dark chocolate, it came in a long box with a little pull tab that lifted it out. It was delicious and such a treat. Finally, the brown ‘derby’ – ice cream in a cone that was dipped into chocolate so it had a hard shell. These were especially delicious and a big family treat.

There were various chocolate bars too, and when I came to Australia I fell in love with the ‘Violet Crumble’. Maybe our taste buds change as we get older. They probably do. I know when I find a new version of some of my old favourites they don’t taste at all as I remember. Sickly sweet and with a slightly chemical aftertaste, they’re no good for my poor old teeth. But things in our childhood seldom stay the same.

What sweets do you remember from your childhood days? Are they still around today?