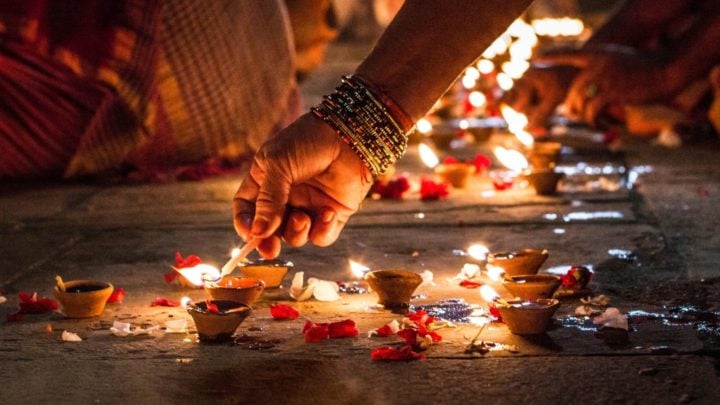 Recently the festival of lights, Diwali, was celebrated. I was born in India. My father was a member of the British police force during the Partition.

Diwali (also referred to as Deepavali) is a five-day festival held between October and November. It’s celebrated by Hindus, Sikhs, Jains and Buddhists across the world. For some it coincides with harvest and New Year celebrations. It’s a festival of new beginnings, the triumph of good over evil and light over darkness. Houses, shops and public places are decorated with small oil lamps, fireworks and sweets.

After the partition we had to leave India, coming to Australia to start our new life. For many years we didn’t talk about anything conerning India and found Australians weren’t very accepting of cultural differences.

When we first arrived in Australia, my parents would eat their curries at home. There were no restaurants that I can think of serving Indian cuisine in the early-1950s.

My uncle moved to Australia a few years after we’d arrived. He was living in a flat in the North Shore of Sydney and was one day approached by a group of men who said his cooking made all the other units smell and requested that he no longer cook his food. He stopped.

I, too, hid the origin of my birthplace. I was once asked about a smallpox scar on my arm and I lied and said a horse had bitten me. It seemed to be an acceptable response.

When I was pregnant with my first child, I was asked if the baby would be black. She wasn’t. In fact, she had lovely blonde hair!

I have wonderful memories of my mother telling me about the balls they would attend for the policemen and how my father used to wear his white jacket. She’d say he was the most handsome man in the room.

He definitely was quite handsome when he wore his police uniform. I thought he looked especially wonderful when he’d ride his police bike and my mother and brother would be in the sidecar.

My father would tell me stories about what life was like during his time in India. He’d speak of the riots, of petrol bombs being thrown. He also told me stories about retrieving bodies from the Ganges and how on one occasion there were prawns covering a body and people scrabbled down get them. It turned me off eating prawns for years! However, my father was also a bit of a yarn spinner and my mother told me I shouldn’t believe all the stories he told.

As I approach my 70th birthday, I’ve often thought of how I’d like to join in the Diwali celebrations. In India, houses would be cleaned and lights would be erected. There were beautiful decorations too.

It reminds me of Christmas in some ways, because there is coming together of family and an exchange of gifts.

I’d love to be able to walk in my parent’s footsteps on Indian soil. Unfortunately, two hip replacements and other health issues makes it almost impossible for me to travel these days. I wish I’d listened more closely to their stories.

Is there a celebration that brings back special family memories for you?