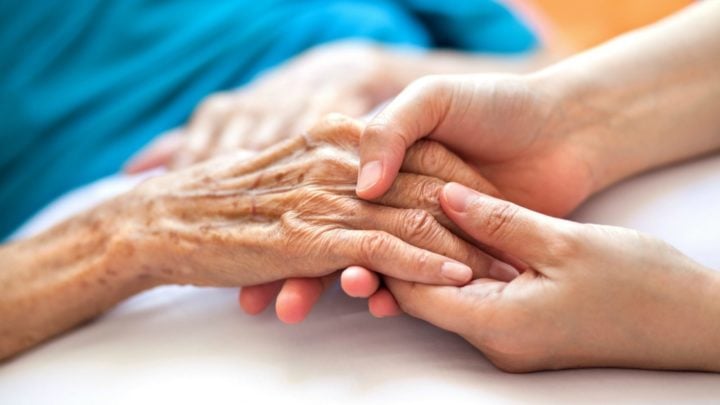 An elderly man has called on the New Zealand government to legalise euthanasia. Source: Getty

A grandad who has just days to live has expressed his hope that assisted dying will be legalised as his daughter admitted it’s “torture” seeing her 90-year-old dad in a constant state of distress.

Raymond Gough, has been battling with his health since May after falling ill with pneumonia and consequently suffering a heart attack which has left him in a dire condition, The New Zealand Herald reports. While he used to be fit and healthy, the grandfather’s health has plummeted with doctors claiming he is now too frail to undergo life-saving heart bypass surgery.

His condition has not only impacted his own life but that of his daughter Julie Marshall who said its been a “tough experience” for the whole family as they watch him slowly fade away.

“It’s torture seeing dad in distress, seeing him crying every day and that’s a tough experience for family,” she told The New Zealand Herald.

Currently in New Zealand it is illegal to help someone end their life, with politicians currently in the process of deciding whether or not residents with terminal illnesses should be able to opt for assisted dying.

Sharing his thoughts on the topic Raymond told The New Zealand Herald: “I believe that when a person reaches a terminal stage they should have the right to opt out, to say no, they don’t want to be here any longer.”

The End of Life Choice Bill, which will return to parliament in a matter of weeks after passing a second reading last month, would allow adults with less than six months to live or those with “grievous and irremediable medical conditions” to end their lives on their own terms.

Raymond’s comments come after a devoted husband from the ACT was cleared of criminal charges after helping his wife end her life.

Neil O’Riordan assisted in the death of his wife Penelope Blume who had suffered from debilitating motor neurone disease, which affects the nerves that control the movement of muscles, the ABC reports.

The doting husband was initially charged with one count of aiding suicide however this was dropped on early last week when prosecutors claimed O’Riordan was acting out of love for Blume who was able to have a “quick and painless” death.

Later, in an candid interview with Channel Ten’s The Project, O’Riordan opened up about the final moments the pair shared together, adding although he was perfectly fine with his wife’s decision to end her own life, it was still the hardest thing he’d ever gone through.

Imagine being faced with a terminally ill partner who’d made the decision to end their life. You can’t change their mind, so you decide to help fulfill that wish. Then imagine being dragged through the courts immediately afterwards. This is Neil's heartbreaking story. pic.twitter.com/0r8ku53eDF

“She wanted to see the beach again, eat seafood again, difficult to acquire in Canberra and mostly I guess we wanted to spend some time alone together,” he said.

Read more: Man who helped his wife end her life opens up about their final moments together

“Theatrically, yes, I was perfectly fine with it… until it happened, and I was devastated. I wailed.

“I think about the unfairness… about why I couldn’t be doing this with my family… why do we have to be covert.”

What are your thoughts on assisted dying? Do you think it should be legalised across all states in Australia?