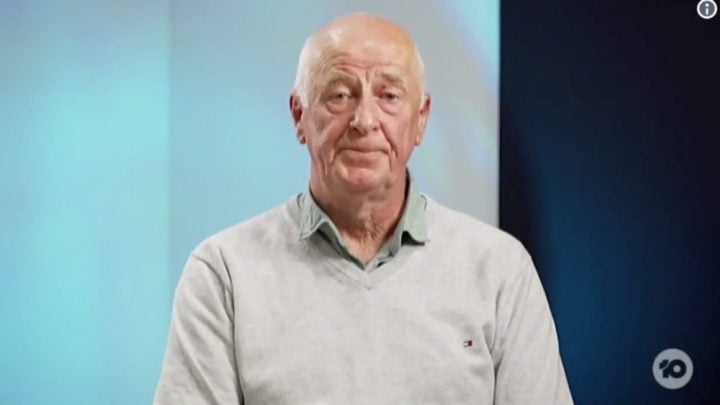 Penelope Blume took her own life in March with the help of an item which had been "modified" by her husband Neil O'Riordan (pictured). Source: Twitter - The Project

A devoted husband who faced criminal charges after helping his wife end her life has revealed the final moments the pair shared together in a heart-rending interview.

Neil O’Riordan assisted in the death of his wife Penelope Blume who had suffered from debilitating motor neurone disease, which affects the nerves that control the movement of muscles, the ABC reports.

The doting husband was initially charged with one count of aiding suicide however this was dropped on Tuesday when prosecutors claimed O’Riordan was acting out of love for Blume who was able to have a “quick and painless” death.

Now in an candid interview with Channel Ten’s The Project, O’Riordan has opened up about the final moments the pair shared together, adding although he was perfectly fine with his wife’s decision to end her own life, it was still the hardest thing he’d ever gone through.

“She wanted to see the beach again, eat seafood again, difficult to acquire in Canberra and mostly I guess we wanted to spend some time alone together,” he said.

“Theatrically, yes, I was perfectly fine with it… until it happened, and I was devastated. I wailed.

“I think about the unfairness… about why I couldn’t be doing this with my family… why do we have to be covert.”

He also revealed he fully expected to be charged for assisting his wife with her death, but decided to proceed anyway.

“I was prepared to and fully expected to be charged and I guess at some level I expected to be convicted and I’m very grateful that the court made a different decision,” he said.

Imagine being faced with a terminally ill partner who’d made the decision to end their life. You can’t change their mind, so you decide to help fulfill that wish. Then imagine being dragged through the courts immediately afterwards. This is Neil's heartbreaking story. pic.twitter.com/0r8ku53eDF

The news comes after Victoria became the first state or territory in Australia to implement voluntary assisted dying legislation, which gives anyone suffering from a terminal illness, who has less than six months to live, the right to end their life legally.

The controversial law, which was passed in November 2017, came into effect in June with State Premier Daniel Andrews estimating that around one dozen people will access voluntary assisted dying within the first year, which will see patients being prescribed medication which they then self-administer at a time and place of their own choosing.