‘Two Old Ducks: Sharing our memories of Christmases past’ 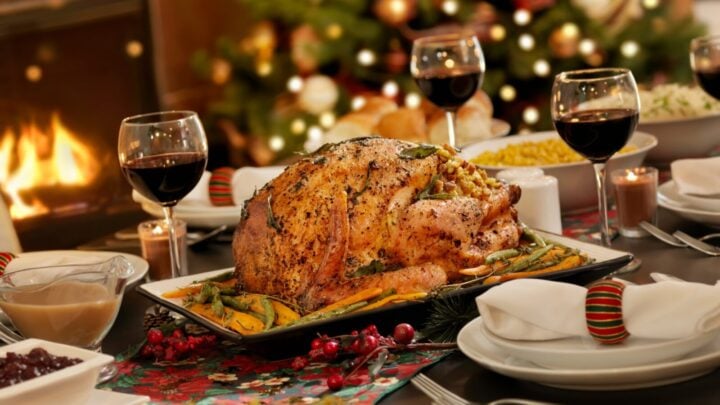 Sue remembers having Christmas dinner with all the trimmings. Source: Getty Images

My friend, Susan, and I live on opposite sides of the world. Our Christmases are celebrated differently. When we were children, we lived in England (though different parts). There was a lot of snow, fireplaces with roaring fires, turkey and all the trimmings served on Christmas Day.

I recall (possibly my last Christmas in the United Kingdom) waking up to a garden blanketed in snow and only the tiny footprints of birds visible on the surface. It was magical!

My dad set the fire, which blazed into magnificence, so we were warm enough to open our presents. For me, it was a red anorak, black trews (like leggings with foot straps) and red knee-high boots. My sister received an embroidered green anorak, black trew and black boots. Whoa! We looked so smart!

Christmas wasn’t a sumptuous affair for my family. We were working-class with not a lot of spare cash, but there were always special treats — fruit mince pies; Christmas pudding and custard; chestnuts, walnuts and brazil nuts to crack open; Christmas crackers to pull that included the inevitable party hat.

As ’10-Pound Poms’ we emigrated to Australia in early-November 1965. Our next Christmas was to be in Brisbane, Queensland. Disembarking from the aeroplane, it felt like opening the door to an oven — hot and steamy. Then we were ‘herded’ into a bus to the immigrant hostel, where we lived for two weeks.

‘Christmas’ was far different to what we were familiar with. However, the truth is, I don’t remember much about our first Christmases in Australia.

Four years later, Mum died. I was 14.5 years old, and over the following 18 months, our family disintegrated. I left school to go to work; my sister finished school and then enrolled in the Queensland Police Academy; Dad and my gran returned to the UK; I went to New Zealand in 1974 (where I worked, married, had two sons, then returned to Brisbane with my own family in 1981).

Since then, I’ve had many memorable Christmas celebrations in both New Zealand and in Brisbane. While the boys were on school holidays we’d go on camping adventures and there was the odd broken bone. Yet despite that, these memories are of fun times that I treasure.

When I spoke to Susan about her Christmases past, she said the first one she remembers was in 1946 when she was five.

“My father had returned from the war and my parents had sold the modern house we lived in near London and bought an old farmhouse in the heart of Kent’s countryside,” she says. “Then they set about restoring it to its original olden time’s construction, with its timber-framed oak beams on view and its inglenook fireplace cleared of the bricked-in tiny fire grate. There were niches in a side wall, where a wooden seat would have been and my father fitted a plank for me and my two sisters to squash up on side-by-side. Sometimes it was a little too close for comfort to a burning log resting on supports made of wrought iron called ‘fire dogs’.”

Susan says it was during that Christmas her mother’s parents and her brother, also back from the war, were coming to eat with them and they didn’t have a big table to fit everyone.

“My father went off to a wood yard and bought a plank of sturdy wood cut lengthwise from a tree trunk and this was balanced on wood trestles, later he made proper supports. Along the edge of the plank were little holes where small branches had been growing and while everyone sat talking after the meal, my sisters and I dug a fingertip in those little holes and started scraping the inside — years later those holes were much bigger!

“Throughout the war, my mother raised ducks and they continued having ducks at the farmhouse – how I loved the sound of their quacking, but we accepted now and then that one would be sacrificed for a meal, just as two would have been that Christmas. My father had the task of killing them, chopping off their heads, and my mother plucked them. One time a ‘quack’ came from the neck of a duck’s body while she was plucking it and that certainly startled her.”

Susan remembers her parents putting a tangerine in each of the children’s Christmas stockings as well as identical presents: miniature cast iron meat ‘mincers’ and mysterious bundles of cloth tied with string.

“My sisters, Linda and Gillian, and I struggled to undo the knots. My parents were helping my sisters with theirs and I hit on the brilliant idea of fetching scissors to cut the strings – I learned a lesson for life that day: always undo knots around presents. My father was so disappointed I’d cut the string because those little bundles of cloth were miniature parachutes. My impatience had ruined the surprise. I’ve also learned to wait my turn for help, but the virtue of being patient has taken a few decades to acquire.”

A few days after Christmas, Susan and her sisters took their mini mincers out to the wire link fence separating the farmhouse from the farmyard still owned by the farmer. Next to the fence were his German prisoners of war helpers eating their lunch and the girls showed them their little mincers.

“We passed one through the fence for them to examine and as a tease, one of the men stuck his finger in it and turned the handle and then gave a loud yelp. That joke greatly impressed me,” Susan says.

She says the family Christmases became more elaborate when the rationing years were over. The family had moved to another farmhouse requiring restoration, so they lived quite a rustic life, “think having to bath in the corner copper where the farmer’s wife had boiled sheets and towels”, she says.

“I don’t remember a Christmas at that house, but I do remember those at the manor house my parents bought subsequently, not only selling the houses we lived in at a profit, but also they had invested in other houses and restored them. An oast house was one such house. The round rooms fascinated me.”

An oast, oast house or hop kiln is a building designed for kilning (drying) hops as part of the brewing process. They can be found in most hop-growing (and former hop-growing) areas and are often good examples of vernacular architecture. The names ‘oast’ and ‘oast house’ are used interchangeably in Kent and Sussex.

“When I was 12, we moved to the manor, but we didn’t live in luxury as in Downton Abbey, because every spare bit of cash had to go into the building business,” Susan says.

“One old house got accidentally set on fire but it wasn’t insured, so my parents arranged for a bank loan to build two new bungalows in its place, that started their additional business of building small housing estates. Eventually we weren’t having to scrape the barrel for our living expenses. Thereafter our Christmases, with family and friends invited, were almost Downton Abbey style!”

Susan and I had very different Christmas experiences. I lived in an industrial county, Lancashire, predominantly populated with working-class people. She lived in the ‘genteel’ counties of Kent and Sussex, more suited to those with a little more affluence. I emigrated to Australia; she went, eventually, to live in northern France. Now, we live alone with our individual menagerie of pets, on opposite sides of the world, by we have so much in common!