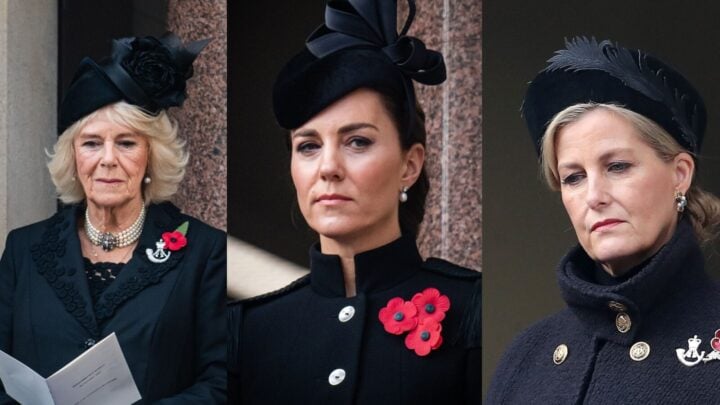 The senior members of the royal family looked elegant as they attended the remembrance service. Source: Getty.

This weekend marked Remembrance Sunday in the United Kingdom, and despite the chaos of the year, nothing was going to stop the royal family from coming together to pay their respects to the fallen soldiers across the nation. As is tradition, The National Service of Remembrance was held at The Cenotaph on the Sunday before Remembrance Day which officially occurs on Wednesday November 11.

The royal Instagram account marked the occasion with two special posts, one of which recited The Ode alongside a series of photos showing the senior members of the royal family in attendance. According to the statement, this year, The Royal British Legion encouraged everyone to take to their windows and doorsteps for a two minutes’ silence at 11am on Sunday November 8 to remember and honour those who sacrificed themselves to secure and protect the freedom of everyone else.

The traditional service is held every year to commemorate the end of the First World War, which concluded on November 11 more than 100 years ago. The wreath-laying service is watched by members of the public as well as former and exisiting members of the armed forces, politicians and the royal family as buglers from the Royal Marines play the iconic tune ‘The Last Post’.

To mark the occasion, the Duchess of Cambridge donned a sleek black button up suit with sharp shoulders and a high collar as well as three bold poppies that were pinned to the chest of the jacket. She paired it alongside a black hat and a stunning pair of delicate pearl drop earrings.

Meanwhile, the Duchess of Cornwall also looked elegant in her black coat and matching black hat that formed the shape of a rose. She finished the outfit off with one of her favourite pieces of jewellery, her pearl choker that has a stunning cluster of diamonds sitting in the centre.

Sophie Countess of Wessex also looked stunning in her black button up coat and her light blue, black and gold earrings. As did Her Majesty The Queen in her jacket that boasted a whole bunch of poppies pinned to the left side of her chest.

The Duke of Cambridge and his father Prince Charles also made an appearance, both looking solemn in their official uniforms as they marched one behind the other. Prince William also held a wreath covered in paper poppies to memorialise those who lost their lives during the war.

The royals were seen adhering to national health advice as they were snapped wearing masks on arrival and practicing social distancing throughout the occasion. Photos showed a substantial amount of space between the Duchess of Cornwall and the Duchess of Cambridge as they addressed the nation from the balcony.

In light of the UK’s recent Covid-related lockdown, the remembrance service was also live-streamed for the first time with the Kensington Royal Instagram page showing a snap of a camera phone that was set up to record and stream the socially distanced service at Exeter Cathedral.

How will you mark Remembrance Day? Have you, or any of your loved ones, served in the armed forces?