Back to work! Princess Mary swaps off-duty chic for stylish pleats and stilettos 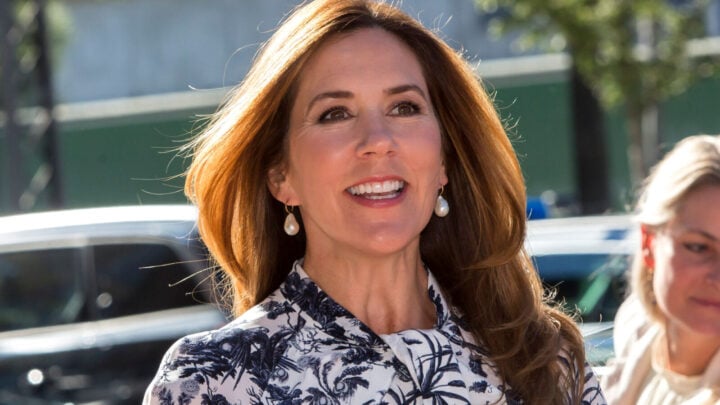 The crown princess stepped out on Monday in Copenhagen. Source: Getty.

Crown Princess Mary rarely puts a foot wrong when it comes to fashion, whether she’s enjoying some downtime with her children, attending charity functions or stepping out at a lavish ball. And the Aussie-born royal hit the mark yet again this week as she stepped out in head-to-toe navy in the Danish city of Copenhagen.

The 48-year-old princess attended an event to mark a new partnership between the Danish World Wildlife Foundation – of which Mary is president – and VELUX. The Crown Princess was elected President for WWF in June 2020, which her father-in-law, the late Prince Henrik, established in 1972.

Mary looked sensational for the outing in a stylish navy pleated skirt, which she paired with a stunning white and blue floral blouse. The Hobart-born royal, who married into the Danish royal family in 2004, added a pop of colour to the look with a pair of vibrant purple stilettos and wore her long locks down over her shoulders.

Mary’s public outing comes after the Danish royal household shared a series of photographs of the crown princess enjoying the final days of the summer break with her family.

“Then another summer passed,” a caption shared alongside the images read. “We have all six enjoyed it around Denmark, and here on the last summer day of the year we send a late summer greeting.⁣”

The first photograph showed Mary and Frederik, who will resume the throne upon his mother Queen Margrethe’s death, posing on the doorstep of their home with all four of their children. Mary is wearing a stunning blue and white paisley-patterned dress in the photos, while Prince Frederik looks smart in a pale blue button-up shirt and brown slacks.

Princes Christian and Vincent echo their father’s style in neutral coloured pants which they each paired with a pastel coloured grandfather collar shirt. Meanwhile, Isabella looks the double of her Australian-born mother in a striped mid-length summer dress, which features a ruffle hem and elaborate sleeve detailing, and Princess Josephine followed a similar style in a red and white patterned dress.

Are you a fan on Mary's style?