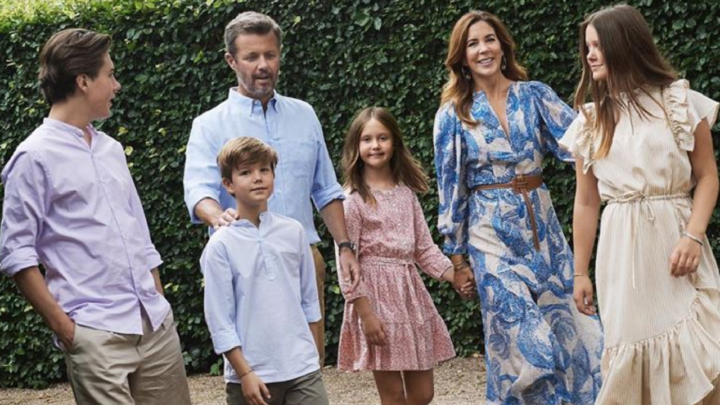 As Australia gears up for the start of summer and the sweltering temperatures that brings with it, over in Europe they are mourning the passing of another summer and preparing for the onset of cooler temperatures. And the Danish royal family marked the end of the season by releasing a series of stunning new images.

A total of five new photographs were released by the royal household on Monday, which showed Princess Mary and Crown Prince Frederik enjoying some quality time with their children Prince Christian, 14, Princess Isabella, 13, and nine-year-old twins Princess Josephine and Prince Vincent.

“Then another summer passed,” a caption shared alongside the images read. “We have all six enjoyed it around Denmark, and here on the last summer day of the year we send a late summer greeting.⁣”

The first photograph showed Mary and Frederik, who will resume the throne upon his mother Queen Margrethe’s death, posing on the doorstep of their home with all four of their children. Mary is wearing a stunning blue and white paisley-patterned dress in the photos, while Prince Frederik looks smart in a pale blue button-up shirt and brown slacks.

Princes Christian and Vincent echo their father’s style in neutral coloured pants which they each paired with a pastel coloured grandfather collar shirt. Meanwhile, Isabella looks the double of her Australian-born mother in a striped mid-length summer dress, which features a ruffle hem and elaborate sleeve detailing, and Princess Josephine followed a similar style in a red and white patterned dress.

“How lucky we are to have such a lovely Crown Prince family. The future is secured in Denmark,” one wrote. Another user commented: “Denmark’s most beautiful family!”

While another wrote: “Love everywhere in that family! To each other and to others. Absolutely WONDERFUL family photos of all of Denmark’s future Royal Family. They always radiate such great love and togetherness in the Crown Prince’s family. Dearest loving family – and what a beautiful beautiful large group of children you have. THANK YOU FOR SHARING. Love you guys and those love pics.”

Two of the photographs also showed the children on their own, with one showing brothers Christian and Vincent posing together on a bench in the family’s garden, while a second showed Isabella wrapping her arms around younger sister Josephine, both girls beaming widely for the cameras.

Mary and Frederik often share family photographs and provide the public with updates about their four young children, particularly Prince Christian who is second in line to the throne. Earlier this year, before the outbreak of Covid-19, the family revealed that all four children had enrolled at the Lemania-Verbier International School, in the ski resort town of Verbier.

Are you a fan of Princess Mary?