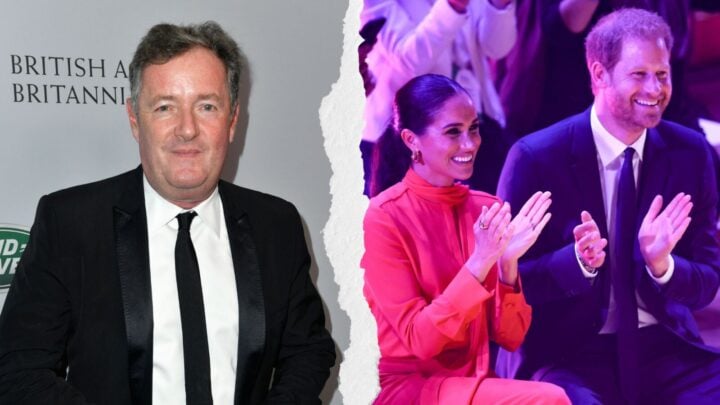 In Piers Morgan’s own words “if there’s one thing more certain in modern life than death and taxes”, it’s that Morgan will use every opportunity possible to take aim at the Duke and Duchess of Sussex.

This time, Morgan’s rant was sparked by Prince Harry and Meghan Markle’s latest portraits, released closely after the Royal Family released their own official portraits.

Prince Harry and Meghan Markle, the Duke and Duchess of Sussex, captured by @misanharriman pic.twitter.com/GKhVHMfbaQ

Writing for Sky News, Morgan said “the message was clear: ‘Anything the stuffy old royals do, we do the same, only better.’.”

“The photo of Charles, William and their wives is a symbol of understated royal power. This is the current and future monarch of the United Kingdom and the Commonwealth.

“Meghan and Harry, by contrast, are now just a pair of B-list wannabes pretending to have royal power so they can make money from it.

“To date, they’ve fuelled their royal status by constantly trashing the royal family and monarchy to anyone who will hand them a big check.”

???? Their Majesties The King and The Queen Consort with Their Royal Highnesses The Prince and Princess of Wales.

Taken at Buckingham Palace on 18th September by @ChrisJack_Getty . pic.twitter.com/heUi1C5E15

The British media personality said the only thing to do to protect the Firm, is for King Charles to remove Harry and Meghan’s Royal titles and move them “into unaccustomed obscurity”.

“He knows how damaging it is to the royal brand to have these two running an unofficial rival royal household that performs no duties but milks the titles for huge personal commercial gain while constantly attacking the family and institution,” Morgan said.

“Their whole royal status depends on their titles. It’s literally the currency of their fame and fortune. Yet they have no obligations or duties to earn them.

“So, if I were King Charles, and notwithstanding the fact he still loves his errant son, I’d make it very clear to them that if one more word of public criticism about the royal family or monarchy spews out of their spoiled, entitled, attention-seeking mouths, they’ll be stripped of all remaining titles and dumped into the trash can of former royal irrelevance.”

Despite Morgan’s outspoken opinion on Harry and Meghan’s latest portrait, the photographs were well received by the public on social media.

“What a stunning picture, you bring out something in them for sure. It is a level of comfort, trust and respect,” one user wrote.

“What a beautiful & STRONG picture,” another commented.