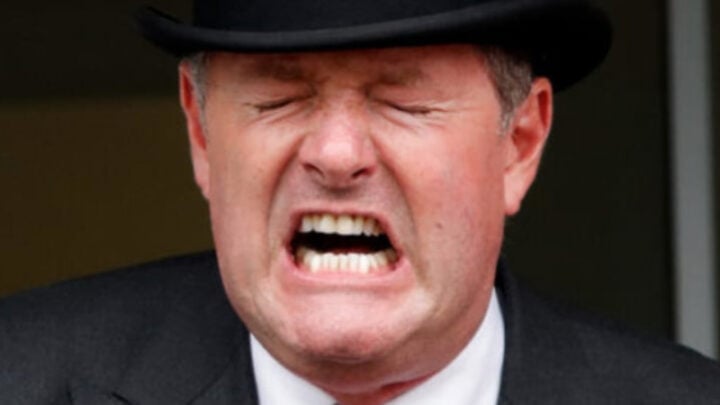 Much to Morgan's displeasure, the trailer used one of his soundbites in which he discusses Harry and Meghan, a move he claims has left him "traumatised". Source: Getty Images.

British media personality Piers Morgan is back on the attack, venting his frustration at Prince Harry and Meghan Markle regarding the trailer for their documentary.

The trailer for the Netflix series, Harry and Meghan, was released recently and provided some insight into what viewers can expect from the six part series.

However, one specific detail in the trailer caught the attention of the former Good Morning Britain host, leaving him irate.

Much to Morgan’s displeasure, the trailer used one of his soundbites in which he discusses Harry and Meghan, a move he claims has left him “traumatised”.

Morgan was quick to take to social media to express his frustration.

BREAKING: Princess Pinocchio & Prince Hypocrite use my voice to flog their ghastly new series. I’m traumatised by this exploitation. https://t.co/D3QdXPXC6z

Morgan was not done there, continuing his tirade in a later tweet in which he questioned the couple’s understanding of the truth.

“They already tell yet another lie in the first trailer with the Harry Potter paparazzi shot. These two wouldn’t know the truth if it slapped them round their latte-encrusted tiaras,” he wrote.

Seemingly fed up with his rants against Harry and Meghan, Morgan’s audience were quick to criticise him for his latest gripe with the couple.

“You are part of the problem!!! Do us all a favor and close that mouth!”

“I know you love it piers…you do love the attention.”

“And if you didn’t mention it know body would have noticed! bet they will thank you for promoting it though.”

“If Piers can’t have Meghan, no one can.”

“The more you go on about them, the more I think you’re part of their promotion!!”

Morgan has previously added his two cents on the upcoming documentary, writing a column for The Sun, in which he dramatically expressed that the trailer for the couple’s Netflix tell-all made him sick, saying he “retched”.

Morgan slammed the couple for being hypocrites for seemingly always telling their story despite demanding privacy.

“Imagine bleating constantly about privacy, including repeatedly suing news organisations for intrusion, and then making a kiss-and-tell reality show about your private lives?

Morgan is well known for voicing his disapproval when it comes to Harry and Meghan, most recently he was left speechless after it was announce that the couple would be receiving the Robert F. Kennedy Human Rights Ripple of Hope Award for challenging alleged “structural racism” within the Monarch.

While discussing the award and why Prince Harry and Meghan are being recognised, Robert F. Kennedy’s daughter Kerry Kennedy cited the pair’s decision to go “to the oldest institution in UK history” to tell them “they couldn’t have structural racism within the institution; that they could not maintain a misunderstanding about mental health”.

“They knew that if they did this there would be consequences, that they would be ostracised, they would lose their family, their position within this structure, and that people would blame them for it,” Kennedy told El Confidencial.

While Kennedy applauded the couple for their efforts, Morgan was quick to slam not only the Sussexes but also those awarding the “outrageous” honour.

During the Tuesday, November 22 broadcast of Fox and Friends, Morgan held little back when it came to his disdain for the couple while urging the powers that be to reconsider awarding them the honour.

“The idea that these two little grifters, who quit royal duty, quit Britain… exploited and fleeced their royal titles for hundreds of millions of dollars straight in their back pocket,” he said.

“The idea that they’re being lauded as some kind of heroes in America by your own sort of royal family, if you like, the Kennedys, it really sticks in my gullet.

“And I think they should rethink this, because I think it just to me, it epitomises the malaise of modern celebrity when you have two people going out of their way to trash their families on national television.”

As a proud monarchist, Morgan revealed that he found it “completely outrageous that they are now being given the cloak of honour and prestige and branded heroes by a Kennedy”.